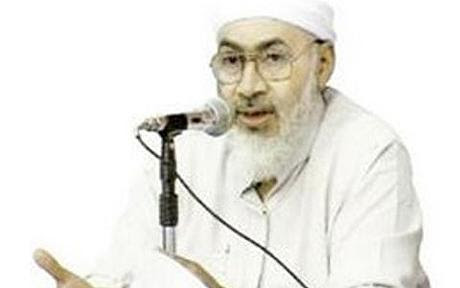 The former senior jihadist cleric Sayyid Imam Al-Sharif, aka "Dr. Fadl," has reportedly issued a new statement denouncing the plans to build a mosque near the site of the 9/11 attacks. The handwritten document, titled "A Statement from Dr. Fadl Regarding the New York Mosque and the Burning of the Quran on the Ninth Anniversary of the 9/11 Bombings," was cited and summarized in Al-Hayat by Muhammad Salah, the newspaper's Cairo bureau chief, who likewise conducted the famous prison interviews with Sayyid Imam in late 2007.[1]

In addition, the Egyptian daily Al-Masri Al-Yawm published what it said was the full text of the statement. (All of the Al-Hayat excerpts are contained in the article in Al-Masri Al-Yawm, but in the former Sayyid Imam labels Faisal Abdul Rauf "an Islamic preacher" (ahad du'at al-islam) whereas in the latter version he is labeled "a promoter of discord" (ahad du'at al-fitna). (The words islam and fitna are not at all orthographically similar in Arabic, so one of the newspapers has presumably altered the text.)

Sayyid Imam is one of a handful of influential radical clerics who helped give birth to the global jihadist movement in the 1980s and 1990s. He is a former head of Ayman Al-Zawahiri's Jihad organization, and in 1987 he authored a shari'a guide to jihad that was used as a textbook in Al-Qaeda training camps. Imam was arrested in Yemen in the post-9/11 security crackdown and was extradited to Egypt. In 2007 he stunned many with the publication of his Document of Right Guidance for Jihad Activity in Egypt and the World, in which he called for a cessation of most forms of jihad. Since that time he has been a regular and vehement critic of Al-Qaeda.[2]

In his new statement, Sayyid Imam expresses opposition to the proposed construction of Cordoba House near Ground Zero in Manhattan: "Although the 9/11 bombings were contrary to the teachings of Islam, they have been attributed to Islam. Osama bin Laden deceived people, saying that he works to champion Islam. Then there appeared a contemporary Islamic preacher [or "a promoter of discord" – see our introduction] who wants to build a mosque near the site of the bombings in New York [i.e. Imam Faisal Abdul Rauf]. I say that it is not permitted to build this mosque on this site, for two reasons.

"The first is that there is no Islamic obligation to build the mosque on this site [in particular], since a Muslim is allowed to pray anywhere that is ritually pure. The second reason is that [building the mosque] entails harm to the victims of these bombings, who were killed in an operation that was contrary to the teachings of Islam, and reminds them and others of their grief." The statement said further that the proposed Cordoba House "is a mosque of discord (fitna), and one is not allowed to aid in its construction in any manner, even if the Americans were to agree to it, since [if it is built] this damage and discord will continue for generations to come."

Imam also condemned Pastor Terry Jones for his (now-cancelled) plans to burn the Quran, saying that doing so "would not harm the Quran or Islam one bit. He would only be harming himself and his coreligionists. This behavior has the potential to turn the entire world into a bloody field of conflict between Muslims and non-Muslims."

The statement also expressed criticism of the radical Yemeni-American cleric Anwar Al-Awlaki, who has expressed pride in his ties to the Fort Hood shooter Nidal Hasan and the would-be Detroit bomber Umar Farouk Abdulmutallab,[3] and who earlier this year appeared in an Al-Qaeda video and called on American Muslim servicemen to kill their fellow soldiers.[4] Sayyid Imam writes: "Anwar Al-Awlaki's appeal to Muslims in America to kill their American colleagues is contrary to the teachings of Islam… The [first] Muslims emigrated from Mecca, fleeing the harm [done them] by their own people, and lived in safety among the Christians of Abyssinia. The Prophet Muhammad, may Allah's prayer and peace be upon him, did not order them to kill anyone among the Abyssinians. If this had been obligatory, the Prophet would have ordered them to do it."

In the closing portion of his statement, Sayyid Imam denies that there exists an existential struggle between Muslims and non-Muslims, and addresses a few words to the topic of his former colleague Osama bin Laden: "There have been four destroyers in human history who wanted to burn down the world in order to realize their imperial ambitions: Genghis Khan, Napoleon, Hitler, and Osama bin Laden."