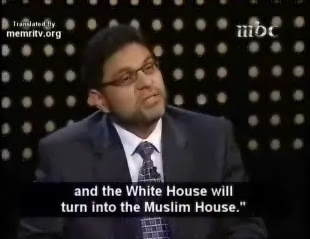 MEMRI is the most vital source of news from the Middle East. Hands down. They translate programs, newscasts, etc., coming out of the Muslim world. Unfamiliar with MEMRI? Go here.

Shutting down MEMRI is the equivalent of shutting down Edward R. Murrow back in the day. The implications of such action are unquantifiable.

They want to eliminate all information that is damaging about Islam. The TRUTH that is. Everybody needs to be silenced and listen to the MSM Dawa and their praise of Islam. (Hat tip Armaros)

I will be sending MEMRI a donation to fight this leftist/Islamic totalitarianism. May I ask you to do the same? I know times are tough in Omerica, but we must support those who are doing the heavy lifting in this fight of our lives, our children's lives .......... the life of our very civilization. I cannot overstate the importance of MEMRI. The Islamic machine is getting bigger, bolder, brasher with the indispensable aid of the debased left.

If not for MEMRI, I would not know who Wafa Sultan is or the proper way to beat the wife. But these are just two of thousands of critical examples.

This is shocking. Jonathan Narvey of The Propagandist has this:

With YouTube's suspension of The Middle East Media Research Institute's (MEMRI) video channel, a critical resource for those looking to understand Middle East politics and the global jihadist threat is now gone. Will they bring it back?

MEMRI's methods are simple: take publicly available videos of things like speeches by dictators like Mahmoud Ahmadinejad, statements by terrorist spokespeople or even samples of children's programming inciting violence in Egypt. And they translate these statements from Arabic or Farsi into English, with basic context (Name of the speaker, date and location. Just the facts, ma'am).

What sort of things are you likely to see in MEMRI videos, exactly? Mahmoud Ahmadinejad calling for death to America and Israel. A Yemeni cleric explaining how Jews are like pigs and monkeys. Instructions about how to beat your wife from an Islamist television host. With MEMRI providing the context, these videos become compelling evidence that the Islamist war on civilization is not merely some bizarre imaginary concoction from Dick Cheney's brain.

The need for this kind of service is obvious. The jihadi threat to both Muslim nations and the outside world is very real. Seeing precisely what these people are saying, as opposed to what is being reported that they are saying by second-hand sources, is invaluable for understanding the mindset and intentions of the ones making the statements.

Has YouTube caved into Islamists who are using the platform as a propaganda and recruiting channel? That's the most likely conclusion.

Without accurate translations of primary sources, those opposed to the jihadi agenda are less equipped to carry out their own work.

For now, MEMRI has an alternative channel set up at http://www.youtube.com/user/MemriTelevision

Check it out while you can.