Israel's outgoing intelligence chief said Iran won't be able to build a nuclear weapon until 2015, reflecting a growing consensus among the U.S. and its allies that Tehran's suspected effort to obtain a warhead has been significantly slowed. 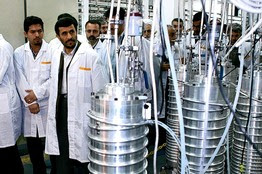 Officials in the U.S., Europe and Asia credit, in part, an international campaign that they say has restricted Iran's ability to procure the raw materials needed to build an atomic bomb. In particular, they say, Iran has had difficulty acquiring carbon fiber and a particular high-strength steel, two critical inputs for making machinery used in producing enriched uranium.

These officials say Tehran is stalled in its efforts to deploy advanced centrifuge machines that could drastically accelerate the production of highly enriched uranium, which is needed for a nuclear bomb. Tehran says it isn't trying to build a nuclear weapon.

Israeli officials, among the most hawkish on Iran, have significantly dialed back their assessments on the time Iran needs for a bomb.

A number had said Tehran could have an atomic bomb this year. But in statements reported Friday by Israeli newspapers, the country's departing spy chief, Meir Dagan, pointed to 2015, crediting international sanctions and covert activities to slowing down the Iranian program. The estimate was the most distant timeline for Iran developing a nuclear weapon yet put forth publicly by a senior Israeli intelligence official.

Changes in estimates of when Iran will have a nuclear weapon.

2005 The Director of the Pentagon's Defense Intelligence Agency testifies before Congress that Iran is within five years of producing a bomb.

2007 A U.S. National Intelligence Estimate concludes that Iran ceased its efforts to build an atomic weapon in 2003.

2003 Defense officials tell the Knesset that Iran could have a nuclear weapon by 2005.

2009 Benjamin Netanyahu, up for election, says Iran is probably a year or two away from a nuclear-weapons capability.

2011 Outgoing Mossad intelligence agency chief Meir Dagan, on his last day on the job, says Iran can't get a nuclear weapon before 2015 at the earliest.

"Obviously, there have to be new appreciations of the facts when you have them," said a senior official in Mr. Netanyahu's office.

Officials in the U.S. and Israel stress they still believe Iran is actively seeking nuclear weapons, and that its program is still advancing. The U.S. and allies stress that despite Iran's setbacks, efforts to pressure Tehran financially need to be continued and intensified.

Officials say Iran already has enough low-enriched uranium stockpiled to create as many as four atomic weapons if it decided to further process the fuel. The U.S. and the IAEA also worry Iran could have deployed advanced centrifuges at clandestine sites.

But the recent conclusions appear to signal a diminished prospect for a military strike in the near term, whether by Israel or the U.S., intended to disrupt nuclear weapons production.

"We said for a long time that, if the Iranians made the decision to proceed with the development of a nuclear weapon, it would be the early to middle part of this decade before they could do so successfully," a U.S. official said. "Questions remain about whether they've made that call."

The Obama administration and European governments hope the slowing of Iran's program can buy time for international sanctions on Iran to gain traction and potentially force Tehran into accepting limits on its nuclear program, though recent diplomacy has registered few gains.

"We believe they are experiencing critical shortages" of raw materials for the centrifuge program, said a senior European official briefed on Iran's nuclear work.

A second round of talks between Iran and the five permanent U.N. Security Council members plus Germany is scheduled to begin in Istanbul on Jan. 20, a spokeswoman for the European Commission said Friday. The participants are still working on an agenda for the discussions, the spokeswoman said. 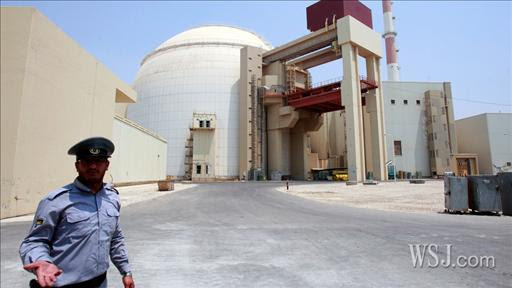 Israel's outgoing top spy says Iran couldn't develop a nuclear warhead until 2015 at the earliest. Charles Levinson has details from Jerusalem. Plus, Hyundai drives to the top of the luxury car market.

Iran says its nuclear program is proceeding apace. "No matter how much effort they put into their sanctions…our nuclear activities will proceed and they will witness greater achievements in the future," the head of Iran's Atomic Energy Organization, Ali Akbar Salehi, told state-run Press TV last month.

The U.S. and its allies in recent years have significantly increased their efforts to choke off Tehran's access to such so-called dual-use equipment. U.N.-backed sanctions have made up part of this effort.

In 2009, Manhattan's district attorney indicted a Chinese businessman and his company for allegedly attempting to sell tens of millions of dollars of dual-use items to an Iranian defense company. The businessman denied aiding Iran's weapons program.

Last year, the State Department instructed the U.S. Embassy in Beijing to press Chinese officials to block a shipment of five tons of carbon fiber allegedly destined for Iran.

A series of recent attacks Iran's main enrichment facility at Natanz by a computer virus, known as Stuxnet, have also set back Tehran's production of nuclear fuel, according to Western diplomats.

The U.N.'s nuclear watchdog, the International Atomic Energy Agency, reported in November that Tehran shut down all of its enrichment machines that month for up to ten days, in a move Western diplomats tie to a Stuxnet attack.

Neither the U.S. nor Israel have confirmed or denied a role in any operation.

But these machines are inefficient and break down regularly, according to the IAEA, which has inspectors at Natanz.

Iran has announced it is developing a range of more advanced centrifuges to produce nuclear fuel, with names including the IR-2M and the IR-4.

President Mahmoud Ahmadinejad publicly unveiled in April a "third generation" of centrifuge that his government claims can enrich uranium six times faster than the IR-1.

Iran's IR-1 uses a spinning rotor tube made out of aluminum, which continues to be widely available on the world market, according to nuclear experts. The rotors in the IR-2s and Tehran's other advanced centrifuges are made of carbon fiber, which is largely produced by Germany, Japan and other industrialized nations that are employing strict export controls.

Other key components in Iran's centrifuges, called "bellows," which serve to balance and stabilize the fast-spinning rotors, are made of high-quality maraging steel—a high-strength yet malleable form which is in even shorter supply internationally than carbon fiber, according to nuclear experts.

U.S. and IAEA officials say they have yet to see any of these more-advanced machines deployed on a significant scale, in part, they believe, because of the challenges Iran faces in getting raw materials.

Olli Heinonen, who served as the IAEA's top nuclear inspector until September, said—comparing what he saw in a visit to Iranian laboratories in 2006 and evidence today—that it appears Iran hasn't been able to procure enough raw materials, and recent problems with the IR-1 program may have also taken a toll.

"They should be more advanced than they are now," said Mr. Heinonen, who's now a senior fellow at Harvard's Kennedy School. "I suspect we have two years before the IR-2s or IR-4s can be mass-produced."

Nuclear experts estimate Iran has lost over 2,000 centrifuges once installed at Natanz, due to breakdowns and technical flaws. These experts believe Tehran is now close to having exhausted its supply of maraging steel for the IR-1 centrifuges and the more advanced machines.

"There's a sense that Iran simply can't replace this maraging steel," said David Albright, a nuclear physicist who inspected Iraq's nuclear facilities for the IAEA during the 1990s. "They seem to be approaching their limit on the number of IR-1 centrifuges they can build."

Japan is a major supplier of both maraging steel and carbon fiber. Three Japanese companies—Toray Industries Inc., Mitsubishi Rayon Co. and Toho Tenax Co.—account for 70% of global carbon-fiber supply, according to the Japanese government. Last year, Tokyo implemented a law that requires companies to establish specific offices to determine the end-users of its sales.

In Austria, the informal body that regulates global nuclear trade, the Nuclear Suppliers Group, has significantly increased its scrutiny of sales of maraging steel, carbon fiber and other sensitive items to Iran in recent years.

Jay Solomon
—David Crawford in Berlin, Adam Entous in Washington and Yoree Koh in Tokyo contributed to this article.