Pa: Us Funding Freeze Is "Blackmail," "Unjustified" And "Collective Punishment

Fatah: US aid is a Palestinian "right," since the US is "morally responsible" for Israel's creation

Throughout 2011, Palestinian Authority leaders have mocked and minimized the significance of US aid, and even dared the US to cut off its funding of the PA.
Now that the US has announced a freeze of $200 million dollars, PA leaders are criticizing the US, claiming the freeze is "blackmail." Fatah added that the US and other countries owe the Palestinians financial aid on moral grounds, calling US aid to the PA an "obligation" and a "political and moral right" because the US "aided in the establishment of the State of Israel."

Earlier this year, both PM Salam Fayyad and Chairman Mahmoud Abbas criticized the US for linking its financial support to the PA's political cooperation. Fayyad called US requests "extortion" and Mahmoud Abbas said: "The US is assisting us in the amount of $460 million annually. This does not mean that they dictate to us whatever they want." (See quotes and sources below.)

This week, the official PA daily reported:
"Fatah: We are opposed to blackmail by the American Congress; the aid is a political and moral right... The Fatah movement viewed the decision by Congress to withhold the transfer of aid funds to the PA as political blackmail and bias in favor of the Israeli occupation state."

Fatah spokesman Faiz Abu Aytah:
"There is a moral and human obligation which rests with some of the donor countries, including the American administration, since they are morally responsible for the human tragedy which has befallen the Palestinian people since the Nakba (i.e., "the Catastrophe," term used by Palestinians for the establishment of Israel) in 1948."
[Al-Hayat Al-Jadida, Oct. 3, 2011]

Saeb Erekat, PA chief negotiator:
"We appreciate US aid, but to be blackmailed and bargained with over our right to self-determination, on Jerusalem, and on our Arab and Islamic identity is unacceptable."
[Al-Hayat Al-Jadida, Oct. 3, 2011]

Ghassan Khatib, PA spokesperson, Director of PA Government Media Center, and former Minister of Planning and Minister of Labor:
"This [the US funding freeze] is not constructive at all. Such moves are unjustified. These are mainly humanitarian and development projects - it is another kind of collective punishment which is going to harm the needs of the public without making any positive contribution."
[The Independent (website), Oct. 1, 2011]

The Palestinian Authority's strong criticism of the US is not new. Throughout 2011, long before the current disagreement, PA leaders and their official media have been mocking US aid:

When PM Salam Fayyad minimized US aid to the PA, calling US financial support "extortion," he added:
"We are not interested in the first place in receiving assistance from any source that threatens to halt its aid for political reasons."
[Al-Hayat Al-Jadida, Feb. 21, 2011]

A day later, Fayyad mocked US aid in a speech broadcast on PA TV:
"We have never referred to this [US] aid as a replacement for our legitimate aspiration to achieve all our national rights. Absolutely [not]. Because our national rights are not for sale or trade for a handful of [American] dollars."
[PA TV (Fatah), Feb. 22, 2011]

Recently, PA Chairman Mahmoud Abbas has repeatedly stressed his refusal to compromise with the US regarding the Palestinian statehood request at the UN, even at the cost of losing financial aid from the US:
"Pressure is indeed being exerted so that we won't go [to the UN]... but ultimately there is a supreme Palestinian interest according to which we want to act. ... We have indeed been told that Congress will halt the aid, whether we go to the UN Security Council or to the UN General Assembly."
[Al-Hayat Al-Jadida, Aug. 29, 2011]

Abbas has also expressed pride in his personal refusal to give in to US political requests by citing two examples:
"The US is assisting us in the amount of $460 million annually. This does not mean that they dictate to us whatever they want. I recall that they [the US] said, 'Don't go to the Arab Summit in Damascus,' but we went. They demanded that we should not sign the Egyptian reconciliation document [between Fatah and Hamas], but we sent Azzam Al-Ahmed to sign it."
[Al-Hayat Al-Jadida, Jan. 24, 2011] 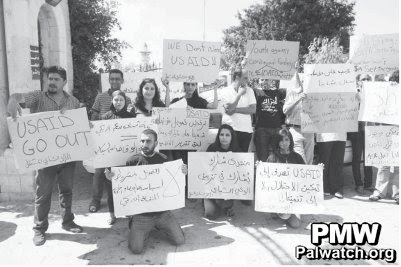 An article in the official PA daily reported on the protest:
"...dozens of Palestinian youth from the Independent Youth Activity group gathered... for a sit-down strike opposite the El-Bireh municipality, protesting what they refer to as 'conditional external funding', which is conditional first and foremost on abandoning so-called 'terror'... They called upon Palestinian youth to internalize the extent of the plot which is being woven by the American institutions against the Palestinian people and the Palestinian cause... The Youth Activity [group] said that this funding is leading to perpetuation of backwardness, increased dependence, the consolidation of [American] hegemony and a weakening of the struggle, since it causes and seeks distortion of consciousness and perceptions, by creating a limbo which they [America] claim represents development, while in fact it is nothing but a bridge to normalization with the enemy (i.e., Israel)."
[Al-Hayat Al-Jadida, Sept. 11, 2011]

In February, 28 Palestinian municipalities decided to boycott the US and reject US financial assistance. Hatem Abd Al-Qader, who holds Fatah's Jerusalem portfolio, explained that they would not be "humiliated" by receiving what he dismissed as "a bit of aid":
"Hatem Abd Al-Qader, who holds Fatah's Jerusalem portfolio, announced a boycott of the American consulate, its diplomats, and the American institutions in Jerusalem... He added that this boycott 'will continue until the American administration changes its stance concerning the Palestinian cause, and especially concerning the issue of settlements, and apologizes to the Palestinian people and its president, Mahmoud Abbas.' Abd Al-Qader said that the American administration 'cannot extort the Palestinian people and humiliate it with a bit of aid.'"
[Al-Hayat Al-Jadida, Feb. 24, 2011]

The US Consulate had good intentions with its support of the play, as it wrote in its announcement about the play: "The Passages of Martin Luther King project is one of many programs sponsored by the U.S. Consulate General throughout the year. These programs engage Palestinians in Jerusalem, the West Bank, and the Gaza Strip, and promote dialogue and mutual understanding between Palestinians and Americans." However, the theater director said that when the American Consul saw what the Palestinian theater had done with US money, "his face turned red."

The following is the interview with Palestinian National Theater artistic director, Kamal Al-Basha:

US funding
It should be noted that not only is the US under the Obama administration a major financial supporter of the PA, but since its establishment in 1993, the PA has received more financial aid from the United States than from any other country. Most of the Palestinian infrastructure has benefited from US aid, including schools, hospitals, universities, water systems, road development, sports and more. The "bit of aid" that the PA is rejecting totaled more than half a billion dollars in 2010 alone [Hillary Clinton speech, Nov. 10, 2010, US State Department website].

The following is the article in the official PA daily reporting on the Fatah spokesman's response to the US funding freeze:

Headline: "Fatah: We are opposed to blackmail by the American Congress; the aid is a political and moral right"
"The Fatah movement viewed the decision by Congress to withhold the transfer of aid funds to the PA as political blackmail and bias in favor of the Israeli occupation state. The movement's spokesman, Faiz Abu Aytah, said yesterday that the funds transferred by the donor countries in order to help the Palestinian people, including the money given by the US, are a political right, since it [the US] is the patron for the agreements signed between the PLO and the Israeli government, in order to allow the PA to build its state institutions. He added, 'There is a moral and human obligation which rests with some of the donor countries, including the American administration, since they are morally responsible for the human tragedy which has befallen the Palestinian people since the Nakba (i.e., "the Catastrophe," the term used by Palestinians for the establishment of Israel) in 1948.' He stated that most of these countries aided in the establishment of the State of Israel, at the expense of the state of Palestinian people."
[Al-Hayat Al-Jadida, Oct. 3, 2011]

The following is the article in the official PA daily reporting on Fayyad's response to the US veto of a UN resolution on the issue of Israeli building in Jerusalem and the West Bank:

"Yesterday Prime Minister Salam Fayyad attacked the US in an unprecedented manner. He emphasized his opposition to American 'extortion,' which is expressed in the threat to halt aid to the PA if it insists on appealing to the Security Council to denounce Israeli settlement. Fayyad said: 'We did not agree, and will not agree, to extortion, and our people will never agree to that. We are not interested in the first place in receiving assistance from any source that threatens to halt its aid for political reasons.' In an announcement to the press during his inauguration of a school in the village of Al-Jalameh in the Jenin district, he added: 'I emphasize that we do not view the assistance offered to us as an alternative to liberty for our people. Justice is on our side, and our rights are not for sale, barter, or trade for a handful of dollars.'"
[Al-Hayat Al-Jadida, Feb. 21, 2011]

US statement on the freeze
This week, the US House Foreign Affairs Committee (and the Senate Foreign Relations Committee) announced it was freezing the administration's request for $200 million in aid to the PA "until the Palestinian statehood issue is sorted out."

Chairwoman of the House Foreign Affairs Committee, Rep. Ileana Ros-Lehtinen:
"There must be consequences for Palestinian and UN actions that undermine any hope for true and lasting peace."
[http://foreignaffairs.house.gov/press_display.asp?id=1989

Copyright - Original materials copyright (c) by the authors.
Posted by Sally Zahav at 9:07 AM