Many ideologies have passed over the Mediterranean Sea on their way to the Arab world, and each time a new ideology arrived, many thought that it would be the ideology, with a capital 'I' that will unite, organize, form and lead the Arab world into European-style modernity. The nationalism (loyalty of the individual to his ethnic group) that was awakened in Europe after the "Spring of Nations" (1848) was known as "Komiya", patriotism, in the Arab world, which is expressed by connection and loyalty to the homeland. Pan-Slavism was transformed into pan-Arabism; European socialism was adopted by the Arab world under the name of "Ba'ath"; Communism was also imported and was known as "Shayoo'aya" and even Nazi ideas that arrived in the years of the thirties took hold among some modern Arab intellectuals. One example is Muhammad Anwar al-Sa'adat, who was head of the Egyptian Nazi movement, and was later to become the president of Egypt.

All of these ideas were buzzing in the public arena in the Middle East within the last hundred years, and observers from outside - mainly the officials of the colonial offices of the British Empire - thought that European modernity had arrived to the Middle East and had settled among its peoples through the modern ideologies that were imported in the mouths and in the pens of those enlightened Arabs who were educated in the Sorbonne, Oxford, Yale and Harvard. On the basis of these ideologies - so the British, French and Italian colonial officials hoped - nation-states will emerge as happened in Europe, and these nation-states will supply a focal point for identity, social adhesion and national consciousness for the masses in the Middle East (though nobody asked these people if they at all wished to adopt the social methods and ideologies of the European states).

But this didn't happen. The masses of the Middle East, for the most part, remained loyal to their tribe, ethnic group, religious group or sect and rejected all of the ideas that were imported from the West. The cornerstone of Middle Eastern culture was and remains tribal culture, that which Europeans thought it possible to eliminate by means of a few articles in the newspaper or speeches on the radio. Today we address our words to the loyalty of the peoples of the Middle East to their traditional frameworks.

The source of this miserable country's problems is the fact that the British included within it eleven different ethnic groups: Kyrgyz, Turkmen, Nuristani, Pamiri, Pashtun, Tajik, Hazara, Uzbek, Aimak, and Baloch. These groups share very little in common, because they have different languages, different world views, different customs, different leadership, different goals, and, in short: these peoples are so different from one another that they don't even speak the same language. It's also important to note that none of these groups is called "Afghani". So is it surprising that this state is a failed state, and that no one manages to stabilize it? Throughout this state's history, foreigners have tried to bring these ethnic groups together into some kind of basic cooperation, but the experiments have all failed. It is a wonder to me that the world continues to resuscitate this dead political body, which should have been divided into its ethnic parts long ago.

This unfortunate state is torn and divided along four axes:
The ethnic axis: In Iraq there are four ethnic groups: Arabs, Kurds, Turkmen and Persians.

The Tribal Axis: The population in Iraq comprises approximately seventy tribes, each one of which functions as if it were an ethnic group. The sons of these tribes do not marry the daughters of another tribe, because they don't trust them, and therefore also tend not to open a business with another tribe. Each tribe has its own dialect, and in Iraq some of the tribes have their own flag and hymn, which are not connected to the flag and hymn of Iraq.

The Religious Axis:
In Iraq there are a large number of religions: Muslim, Christian, a few dozen Jews, Tsavaaim, Mandaean, Zoroastrians, Bahai, Yazidi and more.The Muslims see the members of other religions as heretics.

The Sectarian Axis: The religions are divided: The Muslims are divided into Sunni, Shia, Salafi and Sufi; the Christians have about eight different sects.

Thus, Iraq is "blessed" with all of the four axes of division that are known in the Middle East. Is it a wonder that this state is hemorrhaging?

Because Libya is entirely within the Sahara desert where there is almost no water at all, the population is divided into small tribes; in Libya there are about 140 different tribes. After they succeeded in overthrowing Qadhaffi, the tribes are now fighting one another.

In Jordan, about one quarter of the population is Bedouin, and three quarters are "Palestinian", meaning farmers and city people who do not want to be Bedouins and cannot be Bedouins, and therefore they are now trying to split off from the regime, (which anyway is headed by a family that the Saudis threw out ninety years ago) and to establish for themselves an "alternative homeland", that is, a different Palestine, in addition to that which they hope will arise between the sea and the Jordan River. This is the reason that Jordan's King Abdullah comes to Washington each month: primarily to urge President Obama to exert pressure on Israel to establish a Palestinian state in Gaza, Judea and Samaria. If a state such as this will arise, then the King will be able to say to his citizens: "The Palestinian State already exists" and the king will then be able to exile to that Palestinian state anyone in Jordan who speaks about an "alternative homeland". In this way he hopes to survive on his throne.

In July, 2011, Sudan was officially divided into two states: North Sudan and South Sudan. The North is ruled by Arab Muslims, while most of the population in the suburbs is Christian and Animist (Pagan). The Darfur region has been seeking independence for years, and another region, Kordofan - seeks to secede from the Northern state and be included into the framework of the periphery.

Twenty years ago, two states were merged: The Republic of South Yemen, and North Yemen. Today, most of the demonstrations that are held in the cities of the South - Aden, Taiz and Ibb - are held because of the demand to renew their independence, that is, to divide the state on a tribal basis.

Syria is another hapless state in which there are several ethnic groups: Arabs, Kurds, Turkmen; and a few religious groups: Muslims, Christians, a few remaining Jews, Alawites and Druze. The Muslims are divided into Sunni and Shia - Ismaili, and a few Christian sects. The Islamists see all of them, especially the Alawites, as heretics. The problem of the Alawites being in power is not only because they are only a tenth of the residents of Syria, but also because they are heretics, who must, according to Islam, choose Islam or be slaughtered.

Bahrain is an island in the Persian Gulf, most of whose residents are Persian Shi'ites. But power is held by a minority, an Arab Sunni tribe that the British brought in order to rule the Shi'ites. During the past several years - mainly in 2011 - we have seen many demonstrations, wounded and fatalities.

Gaza is a separate state from Ramallah, and I think that the romance between them will not last many days, because of the cultural differences between the Bedouin of Gaza and the intelligentsia of Ramallah. A different "head". The sons of Hebron do not marry the daughters of Nablus, and the sons of Qalqilya don't marry the daughters of Jericho, because of the tribalism that flows in their veins.

The population of this state is composed of Persians, Azeri, Kurds, Balochi, Arabs and Turkmen, and would have broken up long ago if it had not been a dictatorship: secular in the days of the Shah and religious in the days of the Ayatollahs, since 1978. The Iranian public is secular up to its ears, and many Iranians have no idea at all how the inside of a mosque looks. As the religious oppression increases, the religious level of the people decreases, and with it, the legitimacy of the regime.

The population of Turkey comprises Turkmen, Kurds, and Arabs, and the Kurds have been fighting for independence for many years. Recently, as a result of the slaughter of Muslims that the Alawites are carrying out in Syria, the Muslims in Turkey have begun to kill Alawites in revenge. Erdogan is furious about the abuses of Bishar also for this, because the last thing that Erdogan needs is to have an additional internal front in his country, between the Muslims and the Alawites.

Most of the states in our area comprise groups of different sorts: ethnic, tribal, religious, and sectarian, and many are the eternal conflicts among them; that's why these are failed states. In the Arab Middle East, there is only one group of stable states: the states of the Gulf: Kuwait, Qatar, and the seven states of the United Emirates. Each of these are stable for one reason and one reason only: each of these states is a state of one tribe, that represents only itself. In these states there are no elections for a national leader because the leadership is traditional, accepted and legitimate, therefore there is no reason for elections.

From all that is stated above, one clear conclusion can be drawn: if for demographic reasons Israel wants to exclude from citizenship as many Arabs as possible, we must establish seven city-states for the Arabs in Judea and Samaria: Jericho, Ramallah, Nablus, Jenin, Tulkarem, Qalqilya and the Arab section of Hebron. The "eight state solution" - Gaza and seven in Judea and Samaria - is the only plan that is based on the clear sociology of the region, not on rosy, but impractical dreams of a "two state solution", which should have been ditched a long time ago, both because of the Palestinian non-compliance with conditions of existing agreements and mainly because it is not sociologically suited to the Middle East. Instead of establishing a failed Palestinian state that will have internal conflicts, it is preferable to establish eight emirates that are based on Arab tribes, with Israel keeping the rural area forever, so that it will not turn into Hamas Heights. 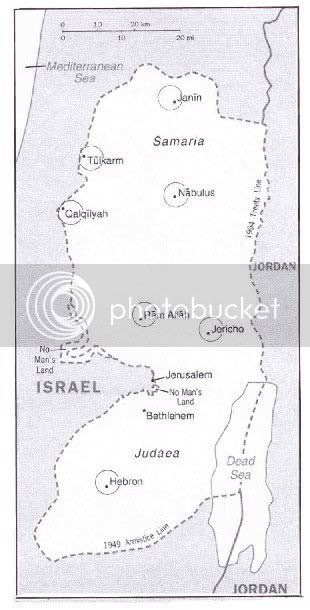 Tribalism in the Middle East is the "real thing", and the population of the area is miserable because of the foreign ideologies that have penetrated into it. Any real and workable solution must be based upon this sociological fact: upon tribalism and loyalty to traditional religious and sectarian frameworks.

Translated from Hebrew by Sally.

Links to Dr. Kedar's recent articles on this blog:
Source: The article is published in the framework of the Center for the Study of the Middle East and Islam (under formation), Bar Ilan University, Israel. Also published in Makor Rishon, a Hebrew weekly newspaper.