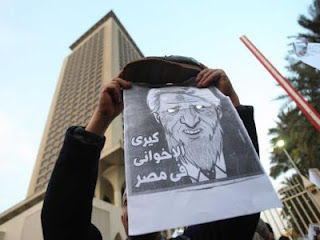 Photo Credit: aljazeera.net
[The photo was taken at a demonstration against John Kerry in Egypt. The caption reads, "Kerry is the Muslim Brotherhood in Egypt".]

While speaking to American diplomats during his current tour, American Secretary of State John Kerry "created" a new state: Kyrzakhstan. Apparently he confused Kyrgyzstan with Kazakhstan. This slip of the tongue is more proof that those who hold key positions in the American government were appointed not because of their experience, talent, knowledge of the field and suitability for the position, but because of their connections, with the president, of course.


The new secretary of state, who has no experience in foreign affairs, must learn within a short time about almost two hundred states, about their history, their culture, their leaders, politicians and rulers and about the conflicts that they are involved in. The new secretary of state does not have a hundred day grace period or a term of apprenticeship, so the inevitable result is characterized by shallowness, mediocrity and mistakes such as Kerry has already made, and mistakes that are much more severe.

And what is worse is that the new secretary of state fills senior positions in the state department with his friends, who, like Kerry, more or less, generally are not familiar with the international scene. Within the state department a nucleus of permanent professional officials does exist, but they are not always in the center of political activity, which is located on the axis between the White House and Secretary of State.

There is a general pattern of failure regarding visits from senior officials, whether from America or Europe. The failure is a result of several factors:


1. The itinerary of the visit: Naturally, the itinerary cannot include all of the states in the region, so someone will always be offended because he and his state were not included in the tour. An apology does not eliminate the feeling of disdain felt by someone who has been left out of the itinerary, and the injured party will find an opportunity in the future to take revenge on the Western leader for insulting him by visiting the region and ignoring him.

2. The visitor wants to meet not only with the people in power, but also with the people of the opposition. This is acceptable in the United States and in Europe, but not in the Middle East: In June 2009, President Obama visited Egypt as a guest of Mubarak, but also met with his opposition, the Muslim Brotherhood. This meeting was like a knife in the back for Mubarak; it humiliated him and he was deeply offended by it. This is the real reason for his absence when Obama gave a speech to the Islamic nation. The meeting with the Brotherhood very much strengthened and encouraged them, and even today, many people who oppose the Brotherhood blame Obama for the success of the Muslim Brotherhood in their taking over the state.

3. The visitor tends to become involved in internal matters of the state that he is visiting, mainly in order to mediate and encourage reconciliation between the government and its opposition. In the Middle East such involvement is perceived very negatively, because according to the regional tradition, a mediator has the status of a judge, and how can a foreigner, who does not understand the culture of the Middle East, be a judge?

4. The visitor usually holds a press conference with his host, a president, prime minister or minister in the local state, in which he expresses support for the host and friendship toward him. In the West - where leadership is seen as legitimate - the public takes the words of the visitor as support for the state and friendship towards it. But in most of the states of the Middle East, where the government is perceived as illegitimate, a visitor who expresses support and friendship  for a ruler is seen as hostile to the population and a n accomplice in the governmental oppression that he suffers from.

5. The visitor likes to offer solutions to regional conflicts, but these solutions are usually shallow and do not address the roots of the conflicts. As a result, the "solutions" arouse opposition and hatred towards the visitor. The most obvious example is the solution based on money: monetary grants encourage governmental corruption and arouse hatred towards the visitor, since he is implicitly encouraging corruption.

6. The visitor behaves according to the accepted behavioral codes of his state, which may differ from those of the host state, especially where women are concerned. Women who hold senior positions in the West - Madeleine Albright, Condoleeza Rice, Catherine Ashton - are accepted in the West as equals to men. But in the Middle East it is not acceptable for a woman to behave in a authoritative manner towards men, even if she represents a different state.  This was especially true regarding Condoleeza Rice, who presented a great cultural challenge to the people of the Middle East, because they had to accept her authority despite the facts that she is a woman, unmarried, and of African descent. These three components, and especially her African descent, caused many in the area to regard her with severe repulsion.

7. President Obama also presents a difficult cultural challenge to the Middle East: a dark-skinned man of African descent is called "Abed" in Arabic, meaning "slave", so how can such a person tell the Arabs, Persians or Turks what to do or what not to do? Add to this the claim that he or his father left Islam, and according to the Islamic approach, whoever leaves Islam must be killed. Many people in the Middle East ask themselves "How on Earth can such a person dare to come to Cairo, to Saudi Arabia, to Iraq as the head of a state?" These words are not spoken aloud, but this is the feeling of many, too many, in the Middle East.

8. Visitors usually speak European languages, especially English and French. But these languages were the languages of colonialism, so when the visitor makes public announcements in one of these languages it marks him as a colonialist, a foreigner, and someone who is arrogant, humiliating and exploitative, and therefore also hated and shunned.

9. In preparation for visits from noted Westerners, there are many who would like to prepare a "reception" for him in the form of attacks and other terror operations, mainly in order to prove "who is in charge here". This was obvious in Iraq after 2003, and during the Palestinian Intifada from 2000 to 2007. As a result of this it can be said with assurance and great sorrow that visits of notables from the West cause bloodshed in the Middle East.

A visit from a Western notable is usually short, lasting a day or two, during which he tries to find a solution to a problem that has lasted for a long time and involves conflicts with ethnic, tribal, religious or sectoral factors or some complex combination of these components. The conclusion that arises from all of these reasons is that it is preferable for leaders and senior officials from the West not to visit the Middle East. These visits complicate old problems and create new ones, and moreover, the chances that these visits will yield a positive effect or result in a real solution to any problem, is quite low.

It is better to conduct diplomacy behind the scenes, with a minimal presence. It is possible to offer support and to help heads of state, politicians, organizations and activities, instead of coming for hasty, public visits, which do not serve the goal in a basic and positive way.

The time has come for leaders in the West to understand that the Middle Eastern culture is not the same as the European or American culture. the people of the Middle East are aware of their history, and have a totally different value system and system of priorities from those of Western cultures. The status of the group - ethnic, tribal, religious and sectoral - is immeasurably higher than the status of the parallel group in Western culture, and it is not possible to implement solutions in the Middle East  that are tailor-made for European or American cultures.

Religious considerations play a key role in the Middle East, and therefore for the leaders of the states  that exercise separation of religion and state, where it is a personal matter for every individual, a basic component necessary to understand the culture of the Middle East is missing.

Visits from leaders are an important part of the political culture in the West, but are perceived in a totally different manner in the Middle East. Therefore it is important for world leaders to understand that their visits in this area are not effective and not positive and therefore cannot bring the desired results.

My words also relate to Israel, because this country is not located in Europe or in America, but must find its way within the Middle Eastern maze . The visits of European and American presidents and heads of state in Israel do not bring positive results, and it is enough to mention President Clinton, whose visit to Israel pushed its leaders to sign the Oslo Accords, which resulted in the rise of Hamas and this organization's takeover of the Gaza Strip.

Obama's imminent visit to Israel may - moreover- push Israel to agree to the establishment of an additional terror state, this time in Judea and Samaria, because no one in the world, including Obama, can assure that Hamas will not take over this area too in time.

Just as a doctor must study at least ten years before he can operate on his first patient, likewise, an engineer studies many years before he designs his first bridge. And a diplomat should study the Middle East well and in depth, its culture, its religions and its history before he comes for his first visit. It would be better if all Western leaders had an academic degree in the history of the Middle East and the cultural  characteristics of this region, before he tries to engineer solutions for societies such as that in Afghanistan and Iraq, and before he comes for visits attempting to solve problems such as those between Israel and her neighbors.

The problems of the Middle East - and the bloodbath in Syria proves this in the most terrible way - stem from the attempt to impose the political culture of foreign societies upon the Middle East. The time has come for the world to stop this and begin to relate to the Middle East according to what it actually is, and not in the dreams of visitors who come for two days.

Translated from Hebrew by Sally Zahav with permission from the author.

Unfortunately, the opportunity to achieve photo-ops and headlines at home are more motivating to politicians than the actual damage they do during their visits abroad. Thus they are the last ones who want to acknowledge this advice.