Senior Official In Islamic Jihad: Firing At Israel Is Not The Way To Settle Internal Disputes


On June 22 and 23, two violent clashes took place in Gaza between Hamas and Islamic Jihad, which resulted in the death of a senior official from the Al-Quds Brigades, the military wing of Islamic Jihad, and in the wounding of another Islamic Jihad official.[1] In the night between June 23 and 24, Islamic Jihad responded to these incidents by firing a barrage of six rockets into Israel as an act of retaliation against Hamas.

This response by Islamic Jihad sparked criticism from one of the organization's senior officials, 'Abd Al-Rahman Shihab.[2] In an article he posted on the website paltoday.ps, which is affiliated with his organization, he wrote that, throughout their history, the Palestinians have tended to avoid solving their internal problems and to target Israel instead, and that real resistance must be based on a clear plan and strategy, not on emotional outbursts and personal motivations. He also criticized the weapons anarchy that prevails in the Gaza Strip and the presence of armed militiamen at funerals, and urged Hamas to tighten its supervision over its apparatuses and militants.
The following are excerpts from the article.[3] 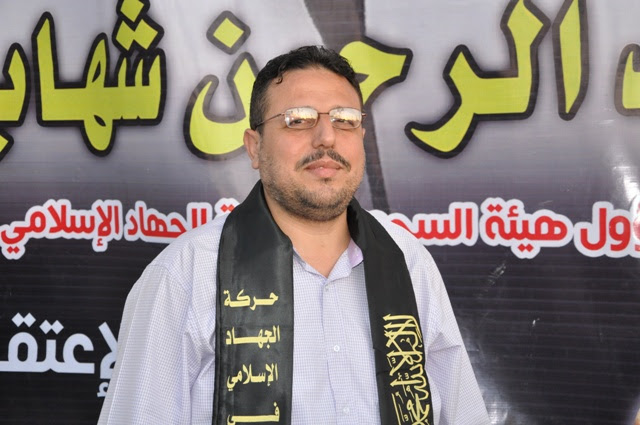 "This parable is told to people who scatter their efforts while [trying to] solve their problems, people who tire themselves out and lose direction, and thus make no progress. They waste their abilities and strength looking here and there..., and forget to address the root of the problem.

"The problem cost us dearly, and everyone should have known how to prevent it. The [Hamas] administration should have realized that there was a flaw in the performance of its security apparatuses, and should have taken rapid measures to prevent a conflict by removing from the scene those apparatuses that are known for their lack of discipline.

"The wise thing to do is to prevent armed militants [of all factions] from participating in funerals where [emotions of] sorrow and injustice run high. It is a grave mistake [to let] funerals be attended by armed security officers who are known for their brutality, anarchism and lack of discipline, as was evident in the funeral [of the Islamic Jihad official].

"[It should also be mentioned that] we Palestinians have a problem. Throughout our history, we have often held the occupation responsible for our own mistakes. I do not understand [the motivation behind] the latest salvo of rockets that was fired at a Zionist settlement near Gaza, unless it was an expression of rage when the internal dispute [between Islamic Jihad and Hamas proved] impossible to resolve. This [tendency] could rapidly lead to a complete lack of restraint and a squandering of our resistance capabilities without [any] strategy.

"I am not against resistance, but it should not be [used] as a means to resolve internal crises within the Palestinian arena. I was against this [method] when Hamas used it against Fatah at the time, and I am against it when Fatah uses it against Hamas and also when [Islamic] Jihad uses it to enrage Hamas. I do not accept it, and I do not think the [various] factions think it appropriate either, when they are honest with themselves.

"Firing rockets does not exempt us from the need to address the root problem. [This can be done] by appointing a committee of professionals and experts that will reach results and draw conclusions, and submit them to the relevant parties in the [Hamas] administration and the factions, and even to the people. This way, everyone will commit to taking the necessary measures in order to ensure that such unfortunate incidents do not recur. I can understand suspending the coordination between Islamic Jihad and Hamas. But the occupation must be kept out of it, because [involving it] pitches us into a labyrinth where lose sight of the truth, avoid holding [ourselves] accountable, and miss the chance to learn from the incident.

"I expect the Islamic Jihad to look out for the interests of the Palestinian people... and understand that real resistance is not [motivated by] rage and fury, but [is based on] a well-tested plan as part of a clear strategy that is not anchored in emotional and personal motivations. I expect Islamic Jihad to inform our brethren in Hamas of legal violations by [its] police and security apparatuses – [violations] which we frequently hear about, unfortunately... I expected Islamic Jihad and the other factions to raise their voices and defend the people's interests against any violation [of the law] by the Hamas administration in Gaza or the Fatah administration in Ramallah... and not confine their protest to cases where their own members were harmed.

"Finally, my heart-felt message to my brethren in Hamas is that everyone must be equal before the law, and that [Hamas] must be extra-strict when it comes to violations and crimes by its senior officials..."

[1] The official killed in the first incident, which took place on June 22, was Raed Jundiya, Islamic Jihad's rocket unit commander, who was shot in the head when the Hamas police came to arrest him. According to the Hamas Interior Ministry, he had been suspected of kidnapping and had failed to report for questioning, and when police officers came to arrest him he tried to attack them and pulled out a gun, to which they responded by firing in the air; his relatives tried to take the gun away from him and in the scuffle that ensued he accidentally shot himself in the head. Islamic Jihad, for its part, said that Jundiya had been shot by the police and that Hamas had not used the accepted communication channels in handling the affair. Other sources presented different accounts of the incident.
The second incident took place during Jundiya's funeral, on June 23, when Hamas members tried to run over an Islamic Jihad official, Muhammad Al-Harazin, and injured him lightly. Islamic Jihad official Khader Habib said that the perpetrators had been members of the 'Izz Al-Din Al-Qassam Brigades, and announced that his movement was severing its contacts with Hamas (Safa.ps, June 23, 2013). Contacts were renewed several days later following talks between Hamas head Isma'il Haniya and the Islamic Jihad leadership and after a joint committee was formed to investigate the incidents (maannews.net, June 26, 2013).

[2] Shihab was imprisoned in Israel between 1988 and 2011, and currently heads the leadership of Islamic Jihad prisoners in Israeli jails.