In a May 6, 2014 interview, the commander of the navy of Iran's Islamic Revolutionary Guards Corps (IRGC), Rear-Adm. Ali Fadavi, gave details about his navy's operational preparations for a possible clash with the U.S., focusing particularly on the destruction of the U.S. Navy. Fadavi claimed that after a great deal of practice attacking models of American warships that it had built, Iran is now capable of sinking a real one in 50 seconds, and noted that Iran's aim in preparing to strike American aircraft carriers is to defeat and humiliate the U.S.

Iran, he said, compensates for its technological inferiority to the U.S. with a strategy of asymmetrical warfare, including suicide attacks and the use of speedboat and its missile capability. He added that Iran can prevent the U.S. from using its advanced technology against it, but gave no further details as to how.

Implying that Iran would not allow the U.S. to act against it from its bases in the Persian Gulf countries, he said that the Americans were taking care not to cause a flare-up in the region because they know that they will lose any potential conflict with Iran. Therefore, he said, U.S. naval forces in the region are obeying the orders of the IRGC, which maintains oversight of the Strait of Hormuz and the Gulf, out of its fear that Iranian vessels or missiles will target them.

In another interview, on May 10, Fadavi hinted that his navy was planning to use its drones both as missiles and as platforms for launching missiles.

The following are the main points from Fadavi's interviews with Fars.

"When The Enemy's Ship Is Sunk, He Is Defeated"


Fadavi told Fars: "In the battle arena, the opposing side must be destroyed, otherwise you yourself will be destroyed. Naval warfare is very different than land warfare. In this arena, when your ship is sunk, you are defeated, and when the enemy's ship is sunk, he is defeated.


"The Americans presume to be a superpower, and they point at their military capability as one of the criteria and signs of being a superpower. America's military might lies in its naval capability, and it is only by means of its navy that it can it reach other places in order to actualize its imperialist goals. Therefore, the American navy is not merely one branch; it is an [entire] army with three branches. Its warships are its navy, its aircraft carriers provide its aerial capability, and the Marines are its the land branch." 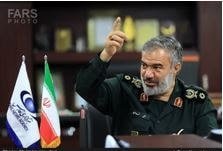 
The Americans Will Not Be Able To Use Their Bases In Saudi Arabia, Qatar, And Kuwait Because Of What Is Going To Happen


"The reason [for the U.S. Navy's long reach] is that the Americans have no confidence at all in their ability to properly use the countries of the southern Persian Gulf when it counts. Iran and all the southern Persian Gulf states and the other Muslin countries are like a single family with many children. All these children have one father, but different mothers. Occasional disputes in such a home are natural. What the Americans do is plan to use a base that they have built, say, in Saudi Arabia, at the right time and when they want – [but] because of events that are going to happen, they will not be able to do so. The same goes for [bases in] Qatar and Kuwait.


"One Of The IRGC Navy's Operational Goals Is To Destroy The U.S. Navy"


"Our friends and our enemies [alike] are aware of only a small part of the IRGC navy's capability, and they are not aware of a large part of it. These unknown capabilities will be presented in time, for the purpose of deterrence, or will emerge in the war arena. But the enemy is already worried about the little intelligence it does have with regard to our capabilities.


"The American aircraft carriers, which are the symbol of American military might, are under full oversight of the IRGC. Naturally, Iran determines when it will carry out the regular training, drills, and maneuvers that it uses for operational goals, and the Americans and the rest of the world know that one of the IRGC navy's operational goals is to destroy the U.S. Navy.


"With regard to the vulnerability of the American aircraft carriers, refer to Robert Gates's book, and see how he explicitly discusses the aircraft carriers' vulnerability to the IRGC navy, and how he seeks to change American naval strategy. This is no simple mission, but he stresses that the change must be made, and [the Americans] have begun to implement it. They acknowledged that the [huge] size of their vessels is making them easy targets for the IRGC navy. We have very precise analyses of the designing of these warships, and we know how we must act. The aircraft on these warships are responsible for America's aerial capability in the battlefield, and therefore it is natural for us to want to sink these warships." 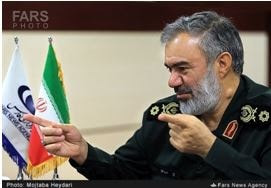 
"For Many Years Now, We Have Been Building Models Of American Destroyers, Cruisers, And Frigates – And Sinking Them"


In response to the interviewer's question about reports in Western media that Iran has built models of American aircraft carriers in order to practice attacking and sinking them, in the event that the nuclear negotiations fail, Fadavi said: "The Americans do not know most of the details, and their research institutes have presented very rough data regarding the scale models of aircraft carriers that we are building. Actually, for many years now we have been building models of American destroyers, cruisers, and frigates, and sinking them. We have even successfully sunk models of their vessels within 50 seconds, in a variety of operations. These small models allow us to practice battlefield operations in the most natural way possible. We have also done this with a scale model of an aircraft carrier, because the destruction and sinking of American war ships was, is, and will remain part of our plan."


"The Americans themselves claim that on April 14, 1988 [during the Iran-Iraq war], the IRGC navy destroyed the guided missile frigate Samuel B. Roberts. Iranian fighters have already demonstrated their capabilities and their skill in striking and sinking cruisers and frigates, and today we must also practice [sinking] aircraft carriers. So we built two-thirds scale models, 202 meters long. The Americans said in their media that Iran did this in order to humiliate America, but that is not why we are doing it. We are doing it for one clear purpose, the result of which will be the defeat and humiliation of the Americans. We want to drill operational and tactical operations of attacking an aircraft carrier."


"Under international law, Iran has the right to oversee the Strait of Hormuz and the Persian Gulf. Therefore, if American vessels do not heed the IRGC's warnings, they will immediately see a large number of Iranian vessels surrounding them, or Iran's missile systems closing in on them. However, this usually does not happen. Here at the IRGC naval command and control center, we speak to the Americans every day, and have been doing so for many years, and they have frequently acknowledged that [when they deal with us] they are dealing with a professional navy. It is naturally difficult for them to speak of the IRGC this way...


"It is the U.S. that is most careful not to fire a single bullet in the Persian Gulf. It knows that if it does, any damage it receives will be substantially greater than the damage it will do [to Iran]. The Americans fear this, especially after the region was divided up between the Iranian military's navy and the IRGC navy. After the division, and after the IRGC naval forces were stationed in the Persian Gulf, we gathered all the military attachés and explained to them this geographic division, under which the IRGC navy was made responsible for the Strait of Hormuz and the Persian Gulf, and the responsibility for the Gulf of Oman and Mazandaran [northern Iran] and over distant [i.e. international] waters was given to the military's navy."


"At least three times, the Americans have contacted Iran via official channels, such as the Swiss Embassy [in Tehran], to establish a [telephone hot] line [like the one between the Soviet Union and America during the Cold War, and thus to be able to control matters. However, we have told them that there is only one reason for losing [control] of matters – and that is your [i.e. the Americans'] presence in the Persian Gulf. If you leave, [we told them], nothing will happen. At the same time, I told them we would consider it once we anchor near American waters in the Gulf of Mexico.


"However, there is one disruptive element: the Americans themselves. Iran has a presence in the north, the east, and the west of the Strait of Hormuz, and completely surrounds it; therefore, it considers itself responsible for securing the region. This could be problematic following an American move...


"It may be that all the southern Persian Gulf states wish to maintain good relations with Iran but the enemies are not allowing them to do so. America benefits from the absence of coordination among the countries of the region. If there is complete coordination among them, the Americans will gain nothing – so they are not letting this happen. This is the imperialist policy..."


Suicide Operations And Speedboats Will Neutralize The U.S.'s Technological Superiority


"[The U.S.] spends more than $500 million on advanced equipment and weapons for its warships. The cost of an American warship is over $1 billion, and of an aircraft carrier is $13 billion. The annual [maintenance] costs for a carrier are higher than some countries' entire military budgets, and can reach $2-$3 billion annually... But they know that these weapons are ineffective against a new [Iranian] strategy relying on faith, on a desire for martyrdom, and on [Iran's] unique speedboats.


"The IRGC navy brings down their technological superiority to the situation of a nascent country, because they will not be able to use what they have in battle. This situation is the result of a new and precise strategy by the IRGC navy, and we will continue with this. Throughout these years, we have not wasted a single day in improving our naval capabilities."


"We have shown the Hoot underwater missile. This is a unique Russian-made missile. It can move at 100 meters per second underwater. Some physicists might not accept this, but Russian experts have achieved this technology, and we benefit from it also; we have had this missile for years..."


Responding to a question about which IRGC vessels have these missiles, Fadavi said: "When the missile hits the Americans, both you and them will see which units fired it..."


In a subsequent May 10 interview with Fars, Fadavi said: "The drone command in the IRGC navy operates separately from the IRGC air force. It uses a variety of drones, first and foremost for reconnaissance missions and operations. We have established a drone base [that covers] the eastern, northern, and western parts of the Strait of Hormuz, and we fly over them regularly...


"We can launch the same missiles that we have on [our] ships and on our shores from drones, in order to hit military targets at sea."


Asked about "suicide drones," Fadavi said: "The use of drone technology is tactical and not strategic. We can determine battlefield tactics according to operational needs, so that a drone can, for instance, function like a missile.


"We have installed anti-ship missiles on our ships, our coasts, and our helicopters. We can install medium range missiles on our drones that can meet almost all of our needs. This process is now underway."