Though Hamas denies being linked to Islamic fundamentalism when it is speaks to a western audience, it uses different language on its official Twitter account in Arabic. The Twitter account shows how Hamas draws its and ideology from the same sources as ISIS in Iraq and Syria.

The difference in speech from English to Arabic

On its English twitter account, Hamas’ Islamist character is played down. The terrorist organization publishes more reserved statements such as, “The Palestinian people are committed to their right to their land, to defend themselves and to lift the siege imposed on Gaza,” (although there are some notable exceptions to this “moderation.”)
However, on its Arabic twitter account, Hamas reveals its Jihadist nature by issuing far more virulent statements, such as:

“We will not rest until Palestine is free … We are not tired nor weary, and we’ll continue on the path of Jihad with the help of God. “ 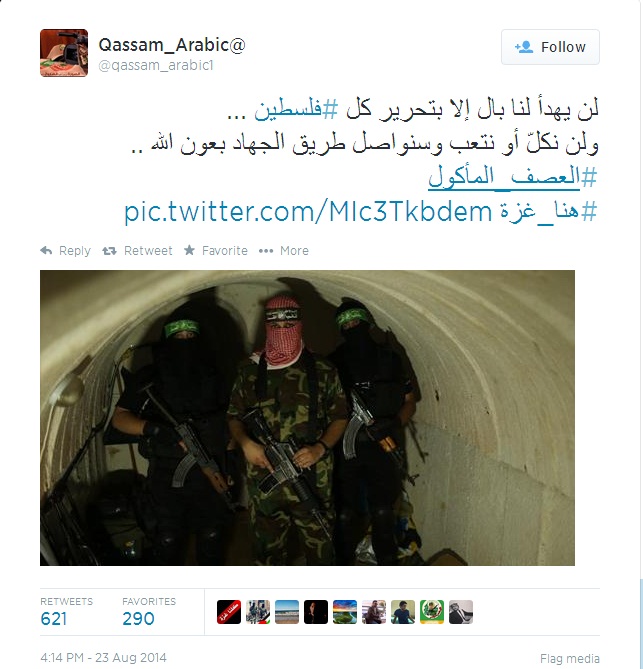 These fundamentalist Jihadist statements are the bread and butter of Hamas. This has been the terrorist group’s position since its founding in 1987– as seen in its charter affirmed in 1988 – and it continues to be so.

Lately, Hamas has been posting the words of Jihadist nasheeds (Islamist religious poems), or hymns, on its twitter account.  On August 25, Hamas posted a popular Jihadi hymn called ”Na’am Qatel” (“Yes Attack”). Na’am Qatil is a Jihad hymn very popular among the supporters of ISIS, as seen here.
Here are the lyrics for Na’am Qatel:
“Yes Resist, for you are our dawn, and rain down [rockets] on the Zionist offspring/ Yes Attack, for you are our victory, attack the call of the infidels in all of the fortresses.” 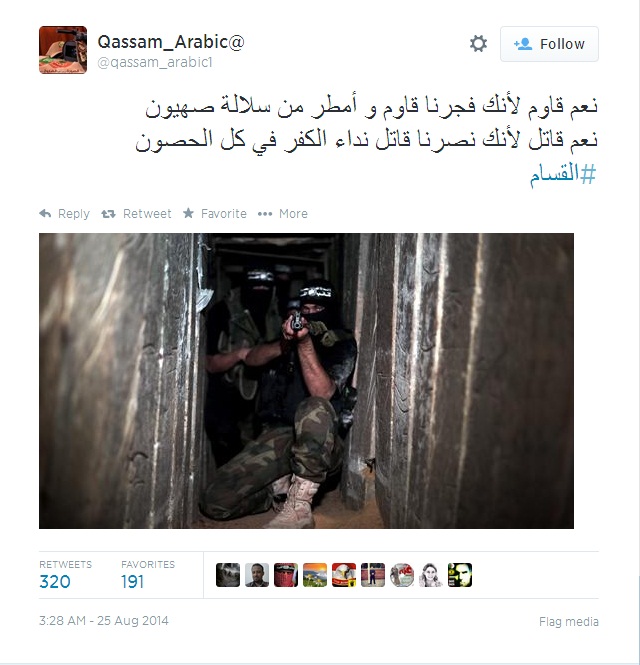 “We are the people who yearn for death”

In the past, Hamas leaders have made numerous statements in which they asserted that Hamas members love death as much as Israelis love life. This doctrine was recently advocated in a speech from the commander of Hamas’ military wing, Muhammad Dief, and previously by Hamas’  leader Ismail Haniyeh.

Moreover, a few days ago Hamas published on its Arabic Twitter account the words of another nasheed, seen here being sung by ISIS members on one of its propaganda videos.
Here is an excerpt of the hymn’s words:
“As I go, I know my path and I know my goal, and death dances around every corner.”

“Jihad as long as we live”

“We, the ones who have pledged allegiance to Muhammad / Will engage in jihad as long as we live.” 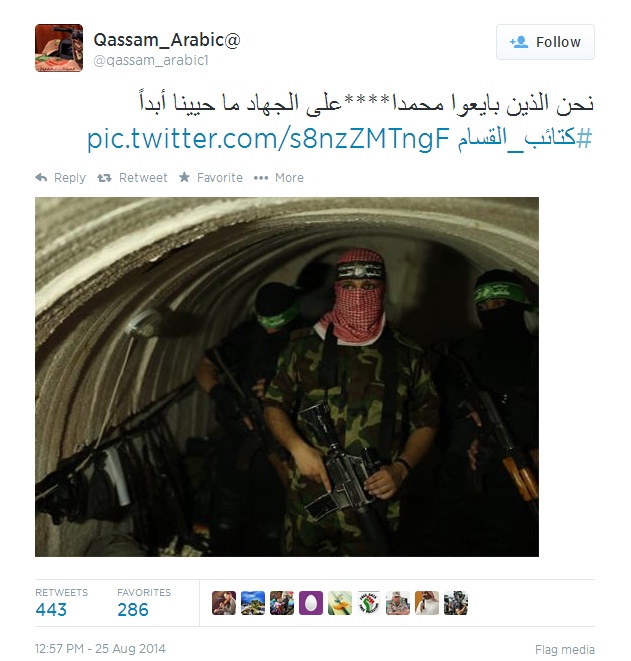 These nasheeds are not only adopted by Hamas, but also by jihadi groups around the world, revealing the similarities between Hamas and other terrorist organizations. The nasheeds published by Hamas on its Twitter account are not just songs but the hallmark of jihadists and their recruitment around the world.

Hamas and other Jihadi Groups

In article twenty-three of its charter, Hamas makes clear its position vis-a-vis other Islamic movements.

“All the fighters of Jihad have their reward.  Hamas regards those movements as its stock holders and asks Allah for guidance and integrity of conduct for all.”

Hamas should be viewed like all other jihadi groups that have earned the scorn of the world for their fundamentalism and brutality.