In an Iranian TV interview, IRGC Deputy Commander Hossein Salami threatened the Americans, saying: "We welcome war with the Americans." The U.S. aircraft carriers would be destroyed, its air bases in the region burned, and the skies set ablaze, he said. "We have built our strength for the purpose of long, extended wars... more than for the purpose of peace, compromise, and dialogue with them," said Salami. The interview aired on the Iran TV's Channel 1 on May 6, 2015.

Hossein Salami: "The warning issued by Khamenei today was extremely transparent, clear, serious, and real. I tell the Americans – so that they will understand his great message better - that the age in which political superiority is gained through threats, intimidations and even military force has come to an end.

"The Americans should not compare their past military victories over feeble armies – which resemble military displays or maneuvers without an enemy – with the outcome and consequences of confronting the great Islamic Iran. They should not make any mistakes in their assessments.

"As a military commander, who grew up in times of war, war is a reality for me, not just a theoretical matter. I warn (the Americans) that we have built our strength for the purpose of long, extended wars, with a real possibility to overcome them, more than for the purpose of peace, compromise, and dialogue with them. Therefore, the Americans should take these warnings seriously.

"If they are relying on their aircraft carriers as a source of power, they should know that these carriers will be destroyed. If they use air bases (in the region), these will be burned. If they want to fly their airplanes, they should know that all the skies will be set ablaze. I warn their pilots that their first flight will be their last, and that none of them will return home safe and sound. 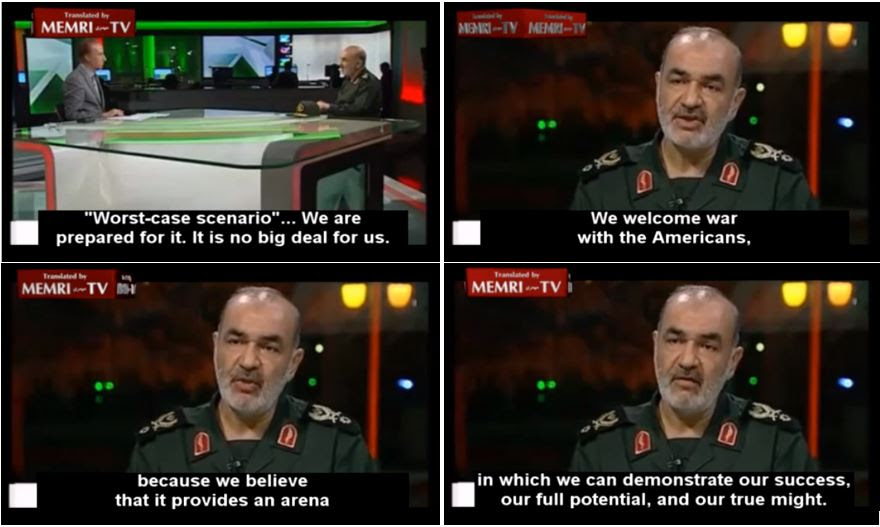 "I recommend to our negotiating team that if the American negotiators use intimidations, threats, and insults again in an effort to gain political superiority, our team should leave the negotiating table, and have the matter over to the IRGC, so that in an atmosphere of intimidation, we will be the ones to determine matters and continue the task."

Copyright - Original materials copyright (c) by the authors.
Posted by Sally Zahav at 1:13 AM