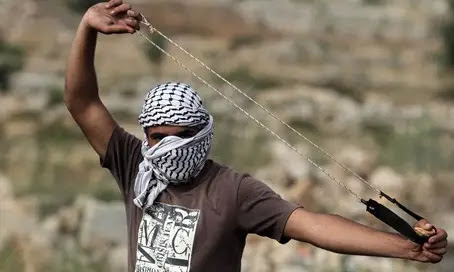 
A cartoon published in Al-Hayat Al-Jadida shows a Palestinian man who has ripped out his heart and is throwing it as a rock. The PA printed this cartoon the day after the death of Israeli civilian Alexander Levlovitch, whose death is suspected to have been caused by rock throwing, the watchdog notes.

Courtesy of Palestinian Media Watch
Another PA daily cartoon published Wednesday also encourages children to throw rocks. It shows a mother and a father carrying Jerusalem on their backs, represented by the Dome of the Rock and a Christian church. Their child swings a slingshot with a stone in it. The cartoon is entitled "packhorse," implying that the Palestinians are carrying the heavy responsibility of Jerusalem on their shoulders.

Arutz Sheva has frequently reported about rock attacks, which have become frequent occurrences in eastern Jerusalem, Judea and Samaria in recent years, but are ignored by most mainstream news outlets.

Such rock attacks can be lethal and are often carried out by terrorists with that intention.
Israel has recently sought to implement stricter counter-measures to deter rock attacks which have proven tragically lethal, notably in the murder of the infant Adelle Biton, who died after a two-year struggle to recover from a rock attack that hit her directly in the head.

In this context, the Knesset approved a bill in July that toughens the punishment handed out to rock throwers.