Deputy Commander of the Iraqi Popular Mobilization Units Abu Mahdi Al-Muhandis accused the U.S. of using excessive force in the liberation of Ramadi from ISIS and in other instances, and said that Iraqis do not need American help in liberating Al-Fallujah. The Iraqi air force is capable of providing the necessary air cover, he explained. In an interview with the Iraqi channel Al-Sumaria TV, Al-Muhandis confirmed that the PMU are assisted by Iranian advisers, led by General Qassem Soleimani. The interview aired on May 28. 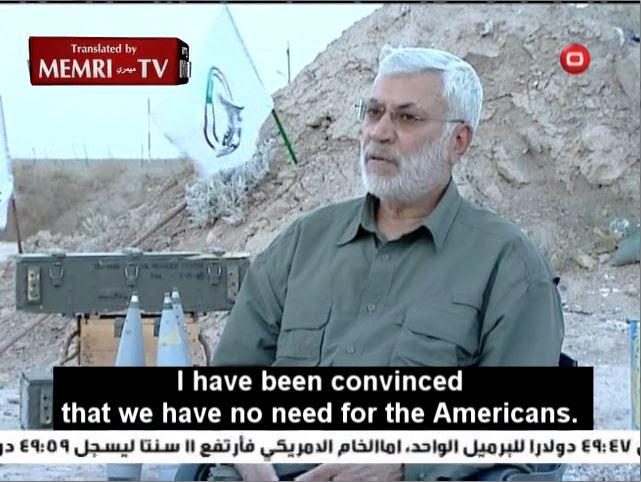 Abu Mahdi Al-Muhandis: "I have been convinced that we have no need for the Americans. The previous Iraqi government, in the tempestuous circumstances of the fall of Mosul, asked for American intervention, but it did not happen. The previous government did ask for American intervention. The new government asked for an international coalition. This is the difference, just to set the record straight. At first, they did not come. When we started, we had shells for Abrams tanks, but now we do not. 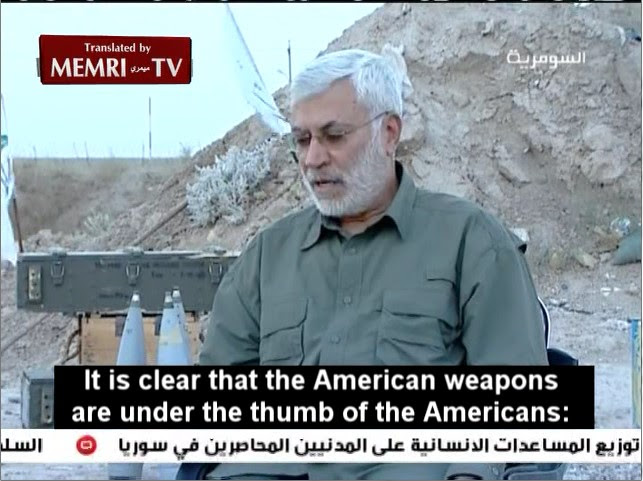 "This is an American tank... I used to ask the officers: Why do you get American weapons? You just pile it up. In the battle for Baiji, we had seven Abrams tanks. One day, all we had left was one shell, which was a flare maybe. We had the tanks, but no ammunition. The company that had provided ammunition for the Abrams tanks was withdrawn. During the Mosul crisis, they did not come for 6 months. It is clear that the American weapons are under the thumb of the Americans: The ammunition, the technical support, and so on. Therefore, we must not rely on something... No reasonable person would rely on a person or a foreign power that gives support when it wants and withholds it in other times."

Interviewer: "But the experience with the Americans in the battle for Ramadi was a success. Ramadi was liberated quickly and there was American air cover in the north..." 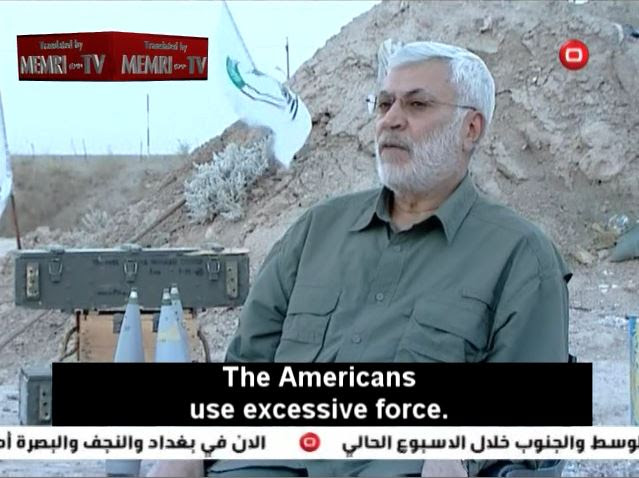 Abu Mahdi Al-Muhandis: "If people want Fallujah to be liberated the same way as Ramadi - within months and with 85% of the infrastructure lost - then fine: Fallujah is right here. There is the American way of liberating a place and there is the PMU's. According to the PMU's way, even if we wanted to sow destruction, we could not. The methods of the Americans and of the PMU cannot converge? The Americans use excessive force. Iraq was destroyed in the first and second Gulf wars."

Interviewer: "The air cover for the PMU has never come from the Americans?"

Abu Mahdi Al-Muhandis: "Never. It has never been American, in any of our main operations."

Interviewer: "Is it that you don't want the Americans' air cover, or do they refuse to provide it?"

Abu Mahdi Al-Muhandis: "We don't need it. What we need is coordination. No reasonable person would run operations on the ground, when in the sky an American plane flies and I am not coordinated with it. This is professionally speaking, but practically, we don't need it. The Iraqis can defeat terrorism with their own capabilities."

Interviewer: "But some say that air cover is indispensable in a battle."

Abu Mahdi Al-Muhandis: "We have the air cover of the Iraqi air force."

Interviewer: "Is it enough?"

Abu Mahdi Al-Muhandis: "Of course. In all our battles, the Iraqi air force was very good. It has invested a lot of effort since the fall of Mosul.

"The air force has developed. The five Sukhoi planes were bought from the emergency budget, the PMU budget. The air force is in a very good position. They have F-16s and other planes. The Iraqi air force is good." 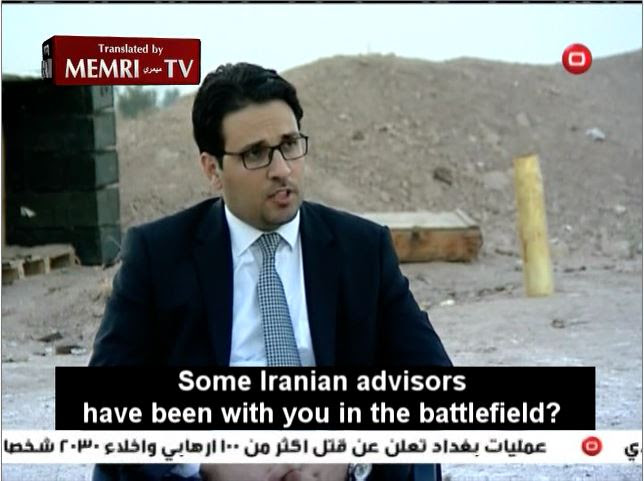 Interviewer: "Some Iranian advisors have been with you in the battlefield?" 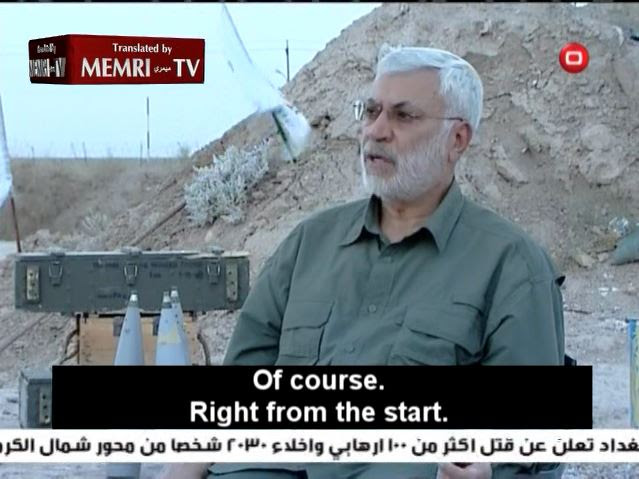 Abu Mahdi Al-Muhandis: "Of course. Right from the start." 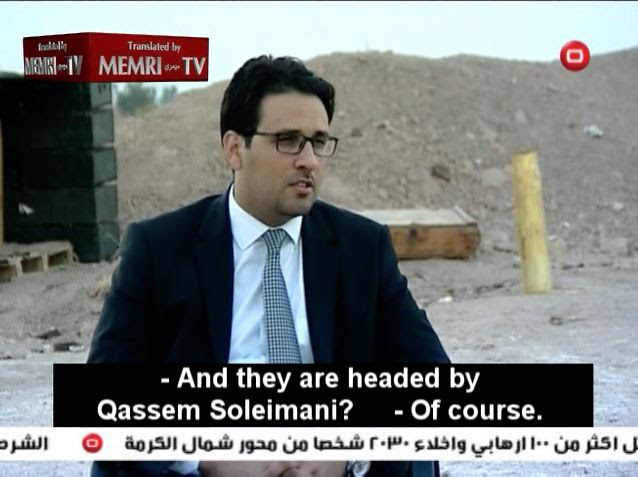 Interviewer: "And they are headed by Qassem Soleimani?"

Interviewer: "This provokes many Arab countries in the American axis..." 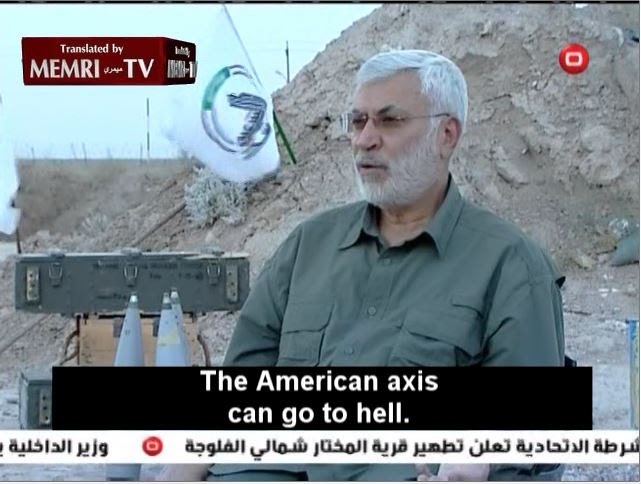 Abu Mahdi Al-Muhandis: "The American axis can go to hell. The Iranian brothers, headed by the dear brother Qassem Soleimani, came here at the request of the Iraqi government. This was done in agreement with the General Commander of the Armed Forces. These people did not sneak in here. But the General Commander of the Armed Forces said: 'Soleimani's pictures in the battlefield upset me.' I have not heard this."

Abu Mahdi Al-Muhandis: "He is our friend. We have no problem with him."