The Jews of Yemen celebrate Passover with their own set of customs. 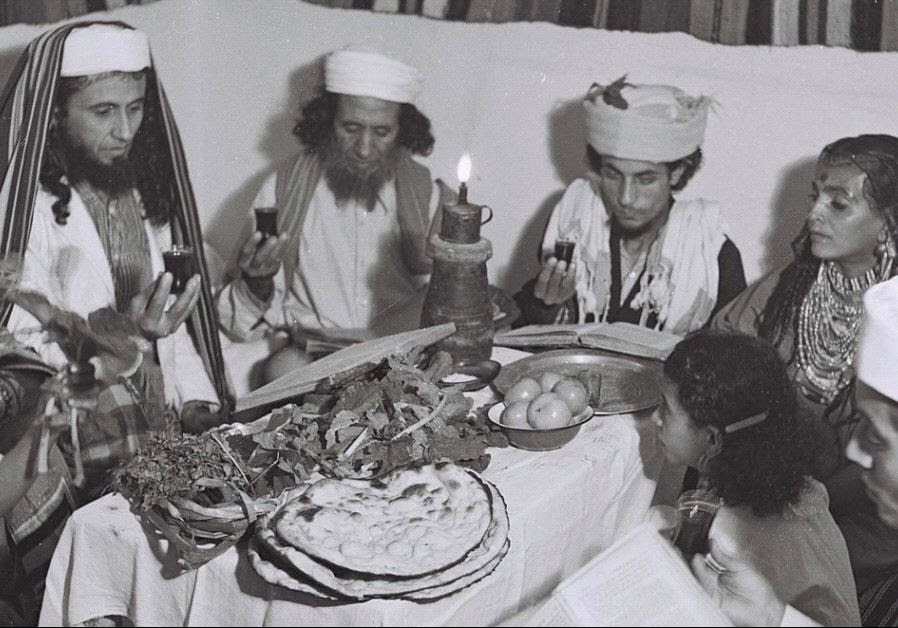 
Growing up in a secular home on Long Island, New York, our Passover Seder was a large family gathering that consisted of good food and sweet Manischewitz wine. There was the Passover silver taken out only for this holiday, the symbolic Seder plate and each person reading a passage at the beginning of the Haggada until everyone got hungry.

As a result, when I became more religious, made aliya and married a Yemenite Israeli, I thought that the Seder we celebrated with my husband’s extended family was the norm of a traditional Seder. Only in speaking with our non-Yemenite guests did I realize that a Yemenite Seder had quite a few different customs.

For example, there is no Seder plate, as the entire table is the Seder plate. Green lettuce, scallions, celery and radishes are arranged beautifully on the table itself, in the order of the Seder plate, with small bowls of the meat, eggs and haroset placed between the greens.
The haroset is called “doukah,” which is ancient and appeared once in the Talmud Yerushalmi (Pessahim 10-c), as is written: “Why is it called doukah, because she grinds (dochah) it with him.”

My in-laws always made the doukah together. They would sit on low stools and grind the ingredients in a gold-colored mortar and pestle that was similar to the one they had in Yemen. This was a ritual that was passed down to the children and grandchildren, including my own children.

Why the grinding? Because the doukah is a rich blend of dates, raisins, almonds, pecans and sweet wine, seasoned with lots of cinnamon, cardamom and cloves. The consistency, as the children were told when they were little, was like the soft cement the Jews used when they were slaves in Egypt. No apples or walnuts were to be found.

In contrast to the custom prevalent among Ashkenazi and Sephardi Jews, who recite a blessing over two and a half matzot, Yemenite Jews recite the blessing over one and a half matzot, on the Seder night and all the other nights of Passover. According to Zemach Keissar from Bar-Ilan University’s Department of Hebrew Language, Maimonides (Hilchot Hametz Umatza, 8-6) specifies: “He takes two sheets [of matza], places the halved one within the whole one and recites the blessing “Hamotzi lehem min ha’aretz” (Who brings forth bread from the earth).

The matza has a soft, almost pitalike consistency and is made in an open clay oven called a tabun. In Yemen, the matza was made fresh every day in the tabun. There was no store-bought matza.

There is a famous story of an emissary from Israel who visited the Yemenite community in the early 1800s and would not eat the matza because he thought it was too thick.

However, the head of the community proved to him that this matza was the actual way that matza should be made. The order of the four questions is also slightly different.

And in addition to the traditional four questions, one of the children recites “Ma cha bar,” a lengthy monologue in Arabic that summarizes in a very humorous and easy to understand way the Exodus from Egypt. The child holds an egg while saying this, and everyone at the table corrects the Arabic pronunciation in good spirit. The original reason for this was so that the women and children, who did not speak Hebrew in Yemen, would understand the story of the Exodus.

After Ma cha bar, the leader of the Seder takes the afikoman, which is wrapped in a tallit, slings it over his shoulder and tells everyone that he is walking to Jerusalem.

This is to remind the children of the way the Jews left Egypt. The leader leaves the house for a few minutes, and it is customary for the children to run after the leader and tell him to come back and continue the story of the Seder.

The traditional Seder food is Yemenite soup, made with chicken or meat, potatoes, onions and rice that is meticulously cleaned so there is absolutely no doubt that it is kosher for Pesach. The matza is broken into small pieces, the soup is poured over this, and it is called “phatoot.”

The Yemenites eat this as a meal every day of Passover. My children ate this for years; but now that they are older, they have decided to add more variety to the Passover menu.

Although “Had Gadya” was not sung in Yemen, many families have added it to their Seder in Israel, although my husband’s family sings it with a Yemenite melody. When the Seder comes to a close, well after midnight, it ends with the singing of The Song of Songs, Shir Hashirim.

There is another custom that I remember from my late mother-inlaw, although I am not sure it is Yemenite. After the children fell asleep, she would put walnuts under their pillows. When they found them in the morning, she would tell them with a smile, “This is your present from Eliyahu Hanavi.”