One must remember that Erdoğan’s ideology is Islamist at its core and that, barring the element of terrorism, it bears great resemblance to the doctrines of the Muslim Brotherhood and Hamas. 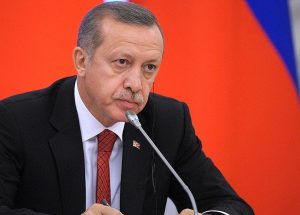 Recep Tayyip Erdogan,
image via Office of the President of Russia,
public domain

EXECUTIVE SUMMARY: Turkey’s Islamist president Recep Tayyip Erdoğan, who recently won a referendum granting him sweeping new powers, has launched a sharp attack on Israel regarding the Palestinians, Gaza, and Jerusalem. It is possible that this attack was part of a Turkish effort to gain hearts and minds in Arab countries.

Turkish President Recep Tayyip Erdoğan’s regime has weathered a tumultuous few months, including a failed coup in July 2016 and harsh international criticism over various domestic policy changes that culminated in a constitutional referendum that has afforded the Turkish president far-reaching powers. Still, throughout this period, Erdoğan had avoided mentioning Israel in his tirades against Turkey’s “enemies.”

After securing the desired constitutional changes in April’s referendum (albeit by a narrow majority), Erdoğan unexpectedly turned his attention back to Israel with a harsh verbal lashing over the Palestinian issue in general, and particularly over Israel’s policies in Jerusalem and vis-à-vis the Gaza Strip. Israel, for its part, responded with equally harsh criticism, saying that “those who systematically violate human rights in their own country should not preach morality to the only true democracy in the region.”

One must remember that Erdoğan’s ideology is Islamist at its core and that, barring the element of terrorism, it bears great resemblance to the doctrines of the Muslim Brotherhood and Hamas. No reconciliation deal or any other interest could ever change the ideology by which the Turkish president outlines his policies, and Israel would be wise not to delude itself otherwise. Erdoğan heads an Islamist political party and his personal philosophy is Islamist as well.

While Erdoğan cannot ignore the fact that nearly half the Turkish public does not share his views (most secular Turks do not believe mixing religion and politics is wise), his Justice and Development Party is pursuing different policies. Erdoğan believes that April’s referendum, which replaced Turkey’s existing parliamentary system of government with an executive presidential system, has given him the mandate required to govern as he sees fit. Politically and structurally, the referendum allows the president to rule without constraint, and its approval validated Erdoğan’s Islamist path.

It is important to understand that this is not a matter of personal whim, even if Erdoğan’s rhetoric seems to suggest otherwise. The Islamist worldview is widely established in Turkey, which is why so many Turks find it hard to accept Ankara’s ties with Israel and its acceptance of Jewish rule in Jerusalem and over Palestinians. A strong Jewish state in the heart of what was once part of the Ottoman Empire is a hard pill to swallow for anyone whose political views are largely shaped by a religious-Islamic worldview, which is why this should not be taken as a personal onslaught.

Turkey has a lot on its plate, and none of the challenges it faces has anything to do with Israel.
First and foremost, the chaos in Iraq and Syria – and the support the Kurds are lending the US-led coalition fighting ISIS in these countries – may lead to the establishment of a Kurdish state along the southern Turkish border. This possibility, which I believe is slim, is of great concern to Turkey, as it threatens its territorial integrity.

Ankara fears that a Kurdish state, or a non-state independent Kurdish entity, would be the first step in a process that would tear away important parts of the country’s southeast, which is home to the Kurdish population. Turkey may find itself fighting a war in Syrian and Iraqi territory to prevent the Kurdish dream of statehood from coming true, and it won’t be easy.

Another serious issue is Turkish identity and its relations with Europe. Turkey is a member of NATO, and its military force in the organization is second only to that of the US. Turkey has been trying to join the EU for years, and Ankara was willing to pay a hefty internal price to meet European standards.

Ironically, the castration of the Turkish military as a significant player in domestic politics began as part of Turkey’s efforts to join the EU. But it is the military’s waning influence that has enabled the Islamist movement to gain momentum and distance Turkey from European characteristics, while simultaneously bolstering the very autocracy of which the EU was wary because of the Turkish army’s political power.
The EU has no intention of accepting Turkey as a member state. The public row with German and Dutch authorities on the eve of the referendum made that perfectly clear. Ankara, for its part, always suspected the EU’s heart was never in it. As one Turkish official told me about 15 years ago, “Europe will never allow the minarets of the mosques to loom over its churches’ towers.” This statement was made at a time when secularism was on the rise in Turkey and Europe, and it is certainly true today, when Turkey is becoming increasingly Islamist and Europe is fighting a cultural war against waves of immigrants. Europe will not open its doors to the Turks, and Turkey must decide where it is heading.

A Turkish attempt to woo the Muslim-Sunni world is doomed to fail. The Arabs loathe the Turks, as the memory of the Ottoman Empire’s harsh treatment of its Arab subjects has yet to fade. Even the Muslim Brotherhood, during its brief rule in Egypt, disavowed its ties with Turkey. This remains true today, when there is no real Brotherhood stronghold anywhere in the Arab world.

Erdoğan’s assault on Israel over the Palestinian issue may have been part of an effort to win over the Arab states, but this attempt will likely fail. Turkey may be able to meet Hamas’s needs, but it has no real chance of realizing its aspirations of Sunni leadership, if only because it is the last Sunni empire. The dream of a Turkish caliphate will not come true because no Arab wants Ankara to be the seat of leadership.

Turkey is also facing a difficult economic period. While the economy has grown under Erdoğan, Turkey needs huge investment to continue the momentum – but the change in the nature of the regime is unlikely to appeal to foreign investors. It is difficult to predict how Erdoğan’s government will deal with economic pressure, but it will find it hard to blame others after it eliminated the opposition. The government is now exclusively responsible for Turkey’s economy.

It is important to highlight the fact that both during the failed coup and before the constitutional referendum, Israel was not mentioned in Turkey as a negative element, and any accusations made against it focus on the Palestinian issue. While there is room for an appropriate, measured response, this should not be made personal. It should not be allowed to undermine either the two countries’ shared interests in the fields of economy and energy or their mutual desire to curb Iran’s regional aspirations. We must move forward with caution, determination and without illusions. It would be best if cooler heads prevail.


Maj. Gen. (res.) Yaakov Amidror is the Anne and Greg Rosshandler Senior Fellow at the Begin-Sadat Center for Strategic Studies. He is also a distinguished fellow at JINSA’s Gemunder Center for Defense and Strategy.