The most significant features of the recent G20 Summit were China’s and Germany’s move to the forefront of the global leadership stage and a corresponding step backward by the US. The change in world leadership will affect the world economic structure over the coming years. 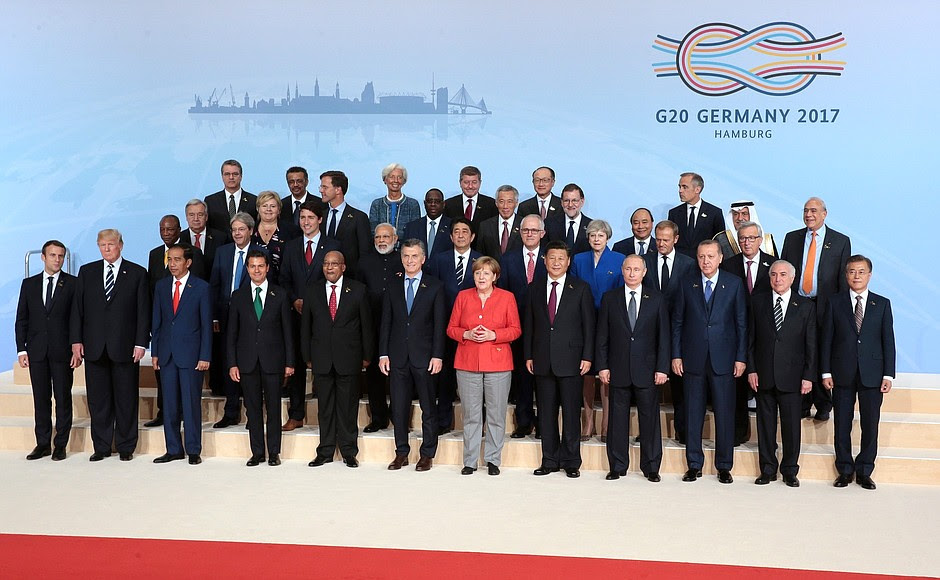 G20 Summit 2017, image via Office of the President of Russia

The G20 comprises 19 countries, including most major economies and the EU. It was established by G7 Forum members in 1999 to expand the scope of responsibility and coordination on economic and financial issues. Together, the G20 economies account for about 90% of the world’s GNP and two-thirds of its population.

The summit took place in Hamburg, Germany, on July 7-8, 2017. Multiple heads of state attended, as well as finance ministers and central bank governors of the permanent member states. The presidents of China, the US, and Russia, along with the chancellor of Germany, drew the most attention. According to a statement by Chancellor Angela Merkel, the topics discussed by those leaders included financial regulation, trade, the war on terror, climate change, and epidemics.

US President Donald Trump arrived at the summit as part of a trip to Europe that began with a visit to Poland, where he was received with great warmth. The moment at the summit that attracted the most media attention was the first face-to-face meeting between Trump and his Russian counterpart, Vladimir Putin. Opinions differ as to whether or not the meeting was successful, but it is clear that Putin benefited more – mainly because he met with Trump as an equal, despite the differences in power between the two countries.

The leaders of the most powerful industrial countries of Asia (China) and Europe (Germany) joined forces at the summit. (Their association benefited from the attendance of a US president who supports protectionism rather than free trade.) The relationship between China and Germany on display at the summit made manifest the gains achieved by Premier of the State Council of the People’s Republic of China Li Keqiang, who has visited Germany three times.

Michael Clauss, Germany’s ambassador to China, said: “China-Germany relations are at a historic peak. As far as Germany is concerned, the economic and political dynamics are moving eastwards”. He added, in a reference to Trump’s abandonment of the Trans-Pacific Trade Agreement (TPP) the day after taking office, that “the United States [has] left a vacuum in the region”. The TPP, a proposed free-trade zone among countries on both sides of the ocean, was intended to be an alternative to China’s Belt and Road Initiative (BRI). The rapprochement between Germany and China is a direct result of American policy.

Relations between China and Europe (Germany in particular) are not free of difficulties. Last year, Germany sold $85 billion of goods to China and was Europe’s largest investor in that country – but some in Germany think those numbers should be higher. The problem is the limitations imposed by the Chinese regime on investment in the local economy. Issues include restrictions on the insurance industry, a Chinese demand that international enterprises collaborate with local companies as a condition for entry into the Chinese market, fear of the new cyber law (many companies worry that the law will force them to disclose their products, which will render them susceptible to copying by Chinese businesses), and doubts that ​​China is in fact a market economy.

The entire global arena is concerned about challenges in China’s relations with Europe and the US, as those three entities are the world’s growth engine. For this reason, the heads of the World Trade Organization, the World Bank, and the IMF called on the G20 attendees to take “decisive steps”, including “removal of trade barriers and reduction of subsidies and other means that disrupt trade.” In other words, the leaders of the international economic organizations are calling upon the countries of the world – especially China and the US – to adopt a different world view. Will that call be answered? Will China adopt a purely capitalist approach, as they call it, and abandon the combination approach it has used since the 1980s? Will Trump’s “America First” policy be abandoned?

The declarations made at the end of the summit suggest that the answer to all these questions is “no”. Each side will move slightly towards the other, making concessions on certain issues and staying firm on others. The summit called for resistance to protectionism, but also vaguely acknowledged the concerns expressed by President Trump over excess steel output. “We will keep the markets open, recognizing the importance of the mutual benefits of a trade and investment system,” the summit concluded. Also, the G20 states pledged themselves to “continue to fight protectionism, including unfair trade practices, and recognize the use of legitimate means to protect trade in that matter.”

This leaves all the parties only half satisfied. Free trade will continue to operate and possibly even expand, but “legitimate means” will be used for the protection of one country or another – though no definition was provided of “legitimate means”.

As for Middle East representation at the summit, Turkey and Saudi Arabia – each with its own political character and economic structure – are members of the Forum. Turkey was represented at the summit by President Recep Tayyip Erdoğan, who attracted enormous attention, mostly negative, since he is seen as a person who tramples everyone who stands in his way. Erdoğan added fuel to this perception by saying the host of the summit was “committing suicide” by not allowing him to speak at a rally to Turks during his visit to Germany on the occasion of the summit.

As for Saudi Arabia, it was its low level of representation that attracted the most attention. In what appeared to be a declarative step, Saudi Arabia sent former finance minister Ibrahim al-Assaf instead of King Salman bin Abdulaziz Al Saud. The Saudi regime is facing a complex set of challenges, including the conflict in Yemen with the Iranian-backed Houthis, the siege on neighboring Qatar, and the dramatic announcement of the replacement of the crown prince by the king’s thirty-one-year-old son. The Saudis’ choice of a low-level official to represent the country at the G20 summit conveyed that the nation is preoccupied with internal and regional problems and cannot be bothered with global occupations. It might also be a call for help in solving the many conflicts in the Persian Gulf, or a threat to those who depend on “black gold.” Only time will tell.


Roie Yellinek is a doctoral student in the department of Middle East studies at Bar-Ilan University.