In fact, the contours of a next round of volatility and violence are already visible. 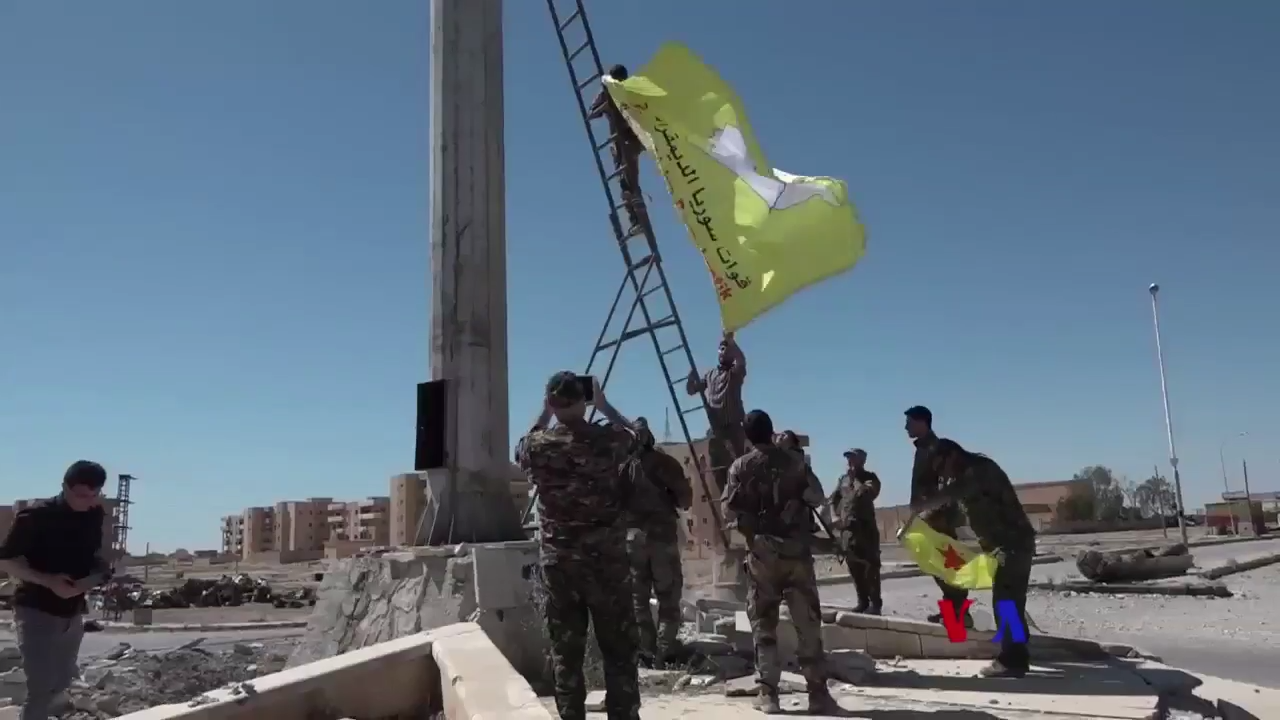 SDF fighters raise their flag in Taqba after retaking it from IS, image via Wikipedia

EXECUTIVE SUMMARY: Several indicators have sparked optimism that tensions in the Middle East may be starting to subside. The problem is that many of those indicators are speculative, and none holds out the possibility of a permanent resolution of multiple problems. In fact, the contours of a next round of volatility and violence are already visible.

Optimists see hopeful signs that the Middle East may be exiting from a dark tunnel of violence, civil war, sectarian strife, and debilitating regional rivalries.

The Islamic State (IS) is on the cusp of territorial defeat in Syria and Iraq. Saudi Arabia may be groping for an exit from its devastating military intervention in Yemen. The Gulf states are embarking on economic and social reform aimed at preparing for the end of oil.

Haltingly, the Gulf states may be forced to find a face-saving solution to the more than three-month-old crisis that has pitted a UAE-Saudi-led alliance against Qatar. There may even be an effort to dial down tension between the kingdom and Iran.

Hamas, the Islamist faction that controls Gaza, said it is willing to negotiate with Palestinian Authority President Mahmoud Abbas about joint rule of the Strip and move towards long overdue elections.

At first glance, these do appear to be reasons for optimism. But don’t hold your breath. Optimists are basing their hopes on shifting sands and tentative suggestions that the protagonists may be looking for ways out of the malaise.

The more sobering reality is that none of the indicators involve actions that would tackle the root causes of the Middle East’s multiple conflicts and problems. In fact, some of the solutions tossed around amount to little more than window dressing, while others set the stage for the next phase of conflict and strife.

Talks between the feuding Palestinian factions have repeatedly failed. It is not clear whether Hamas would now be ready as part of a deal to put its armed wing under Mr. Abbas’s control – a key demand of the Palestinian president that the Islamists have so far rejected. It also remains to be seen how Israel would respond. Israel, together with the US, Saudi Arabia, and the United Arab Emirates, sees Hamas as a terrorist organization.

Beyond Palestine, the contours of future conflict are already discernible. If Myanmar’s Rohingya are the 21st century’s rallying cry of the Muslim world, the Kurds could be one of its major fault lines.

The disputes over territory, power, and resources among Sunni Muslims, Shiites, and Kurds that fueled the rise of IS in Iraq are resurfacing with its demise. In a twist of irony, a recent poll showed Sunnis were for the first time more positive about Iraq’s future than the country’s majority Shiites.

The reconstruction of Sunni cities in the north destroyed by the fight against IS will be key to maintaining a semblance of Iraqi unity. With no signs of massive reconstruction gaining momentum, old wounds that have driven insurgencies for more than a decade could reignite IS in new forms. “All the writing is on the wall that there will be another IS,” said former Iraqi foreign minister and Kurdish politician Hoshyar Zebari.

The initial flash in the pan threatens to be the fact that the Iraqi Kurds are certain to vote for independence in a unilateral referendum scheduled for September 25. If the independence issue did not provide enough explosive in and of itself, the Kurds’ insistence on including in the referendum the ethnically mixed, oil-rich city of Kirkuk and adjacent areas further fueled the fire.

The referendum and the dispute over Kirkuk reopen the question of what Iraqi Kurdistan’s borders are. They will do so even if the Kurds opt not to hold an immediate vote on independence and remain part of an Iraqi federation for the time being.

The issue could blow a further hole into Iraq’s already fragile existence as a united nation state. Iraqi President Haider al-Abadi has denounced the referendum. His efforts to persuade the Iraqi parliament to fire Kirkuk governor Najmaldin Karim for backing the poll, as well as calls for parliament to withdraw confidence in Iraqi President Fuad Masum and sack ministers and other senior officials of Kurdish descent, could push the Kurds over the edge.

Iraqi military officials as well as the Iranian-backed Shiite militias that are aligned with the military have vowed to prevent the referendum from being held in Kirkuk. “Kirkuk belongs to Iraq. We would by no means give up on Kirkuk even if this were to cause major bloodshed,” said Ayoub Faleh aka Abu Azrael, the commander of Imam Ali Division, an Iran-backed Iraqi Shiite militia.

Nor will the fight necessarily be contained to Kirkuk. Kurdish and Iraqi government forces are vying for control of areas from which IS has been driven out, stretching westwards along the length of northern Iraq. Mr. Al-Abadi warned that he would intervene militarily if the referendum, which he described as unconstitutional, provoked violence.

Add to that the ganging up on the Kurds by Iran, Turkey, and the US. The US is backing the Iraqi government, though it was Washington that put Kurdistan on course towards independence when it allowed the autonomous enclave to emerge under a protective no-fly zone that kept the forces of Saddam Hussein at bay. (Breaking with the US and its Arab allies, Israel has endorsed Kurdish independence.)

Turkish intelligence chief Hakan Fidan and Iranian al-Quds force commander Qassem Soleimani have warned the Kurds on visits to Iraqi Kurdistan to back away from the referendum. Iran has threatened to close its borders with the region.

Describing the referendum as “a matter of national security,” Turkish Prime Minister Binali Yildirim said, “no one should have doubt that we will take all the necessary steps in this matter.” Turkey fears that Kurdish independence would spur secessionist aspirations among its own Kurds, who account for up to 20% of its population. It also suspects that an independent Kurdistan would harbor Turkish Kurdish insurgents already operating from the region.

Mr. Abadi alluded to possible Turkish and/or Iranian military intervention to prevent the emergence of an independent Kurdistan by suggesting that the referendum would be “a public invitation to the countries in the region to violate Iraqi borders.” He said, “The Turks are very angry about it because they have a large Kurdish population inside Turkey and they feel that their national security is threatened because it is a huge problem for them. And, of course, the Iranians are on the same line.”

The Kurdish quest for some form of self-rule is likely to manifest itself in Syria too. The US backs a Syrian Kurdish militia aligned with Turkish Kurdish militants in its fight against IS. The militia that prides itself on its women fighters is among the forces besieging the IS capital of Raqqa.

The Kurds are hoping an end to the war in Syria will leave them with an Iraq-style autonomous region on the Turkish border – an aspiration that Turkey, like Iraq, vehemently opposes. The Kurds, who have been the target of strikes by the Turkish air force, hope to benefit from the force’s shortage of pilots resulting from mass purges in the wake of last year’s failed coup against President Recep Tayyip Erdoğan. (To make up the pilot shortfall, the air force last month ordered all former fighter pilots flying for Turkish airlines to report for service.)

The Kurds may provide the first flashpoint for another round of volatility and violence, but there are others. Sectarian and other ethnic divisions are likely to wrack Iraq and Syria once the current round of fighting subsides.

As it tries to find a face-saving exit from its ill-fated invasion of Yemen, which has pushed the country to the edge of the abyss, Riyadh will have to cope with a populous country on its border, many of whose citizens harbor deep anger at the devastation and human suffering caused by the Saudis – consequences that will take years to reverse.

Similarly, the three-month-old rift between Qatar and an alliance led by Saudi Arabia and the United Arab Emirates is likely to leave deep scars that will hamper integration among the six states that make up the Gulf Cooperation Council (GCC), the Middle East’s only functioning regional organization prior to the crisis. The failure of talks between Qatar and its detractors, mediated by US President Donald Trump, even before they got started, suggests that a resolution to the crisis is nowhere in sight.

Coping with the fallout of the Qatar crisis and the Yemen war simply adds to Saudi Crown Prince Muhammad bin Salman’s woes as he prepares to at some point succeed his ailing father, King Salman. Prince Muhammad, who is popular among the country’s youth in expectation of economic and social change, has already had to backtrack on some of that promised change. Foreign lenders have moreover indicated a lack of confidence as they head for the exits rather than explore new opportunities.

In addition, Prince Muhammad has signaled concern about opposition to his proposed reforms within the kingdom’s ruling Saud family, his determination to avoid political change, and his willingness to rule with an iron fist. Prominent religious scholars with significant followings and activists have been arrested in recent weeks while dissenting members of the ruling family have been put under house arrest.

The optimistic view may be that the Middle East is six years into an era of political, economic, and social change. If historic yardsticks are applicable, that amounts to one-third of a process of transition that can take up to a quarter of a century to work itself out. There is little reason to believe the next third will be any less volatile or violent.