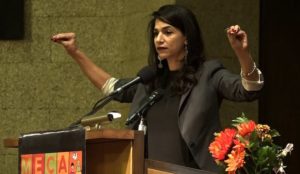 Israel must undergo “settler-decolonization” in which Jewish “settler-colonists … could leave as the French left Algeria, or they could stay as they did in South Africa,” declared George Mason University Professor Noura Erekat last month. Her presentation at Washington’s Middle East Institute (MEI) revealed that nothing is beneath such an Israel-hater, who masks her lies and propaganda with sophistry and a smiling face.

During the speech, the niece of Palestinian Authority (PA) negotiator Saeb Erekat discussed her recent book, Justice for Some: Law and the Question of Palestine, before approximately 80 people. Her fellow panelist, Brookings Institute non-resident fellow Khaled Elgindy, examined his recent publication, Blind Spot: America and the Palestinians, from Balfour to Trump.

Befitting her longstanding anti-Israel extremism, including praise for terrorist Rasmea Odeh and conspiracy-mongering Princeton law professor emeritus Richard Falk, Erekat spewed vitriolic falsehoods. She gushed over the “youth” and “courageous vision” of Yasser Arafat, upon his accession to Palestinian Liberation Organization (PLO) leadership in 1968. She even claimed that the PLO “renounced violence” through its 1998 charter amendments, a cold comfort to Israeli victims of the PA’s current “pay to slay” terrorist payment program, as well as the various terror intifadas.

In Erekat’s remarks — a de facto legal brief for terrorists — she exulted in the PLO “legislating the right to fight” by creating a “new law during the 1970s in order to further their cause for liberation,” the 1977 Geneva Protocol. American opposition to terrorism led to the rejection of this agreement.


JNS.org – The Palestinians’ refusal to attend a US-sponsored “economic workshop” in Bahrain on June 25-26 has been widely treated…

Erekat simply lied about assaults against Israel from Hamas-ruled Gaza. Repeating her past slanders about the Israeli military targeting civilians, she claimed that Israeli shrapnel killed a one-year old infant in Gaza in early May, despite evidence proving that the death was due to a misfired jihadist rocket.

Gazans’ recent attempts to breach Israeli security barriers also elicited her praise. Her whitewash presented the violent 2018 “Great March of Return” as a “resistance path to freedom, using non-violent means, which should make us all celebrate” and “inspire the entire world.”

Predictably, Erekat denounced (non-existent) Israeli “apartheid.” As proof, she cited Falk’s notorious 2017 UN report, which even the anti-Israel UN disowned in embarrassment. She also described Israel’s lifesaving security barrier as an “apartheid wall.” For good measure, she complained that the PA “has not even endorsed the very minimum of Boycott, Divestment, and Sanctions” (BDS) in seeking Israel’s destruction through economic warfare.

Without defining the term, Erekat claimed that “two-thirds of Palestinians do not live in Palestine at all” and invoked the Palestinian refugee lie, by which millions of descendants of perhaps 600,000 Arab refugees from Israel’s 1948 War of Independence now have a “right of return” to Israel. Even she acknowledged that what was once a refugee “family of ten is probably now an extended family of 150.”

Concluding her remarks with yet another hackneyed accusation, Erekat described the Jewish state as a colonial implant. Jews “have not returned to their Arab Middle Eastern roots,” she complained; “they have returned to basically achieve acceptance within Europe” and to “demonstrate their eligibility as part of a European civilizational project.”

Erekat then appropriated the struggle of Mizrachi Jews, who emigrated to Israel from the Middle Eastern and North African (MENA) diaspora, for her anti-Israel propaganda. Much like the antisemitic Temple University Professor Marc Lamont Hill, who calls Mizrachi Jews “Palestinian,” Erekat called them “Arab Jews,” a term they reject. In fact, Mizrachi groups have denounced these distortions as anti-Zionist propaganda; they also celebrate their increasing prominence in Israel.

Erekat’s ahistorical, mendacious claims demonstrate the decadence of contemporary Middle East studies, where ethnic and religious bigotry masquerading as virtue has replaced the search for objective truth. Her presentation also revealed the depths of an Israel-hatred that is increasingly accepted on American campuses.


Andrew E. Harrod is a Campus Watch Fellow, freelance researcher, and writer who holds a PhD from the Fletcher School of Law and Diplomacy and a JD from George Washington University Law School. He is a fellow with the Lawfare Project. Follow him on Twitter @AEHarrod. This article was cross-posted from The Algemeiner.