A second suspected nuclear installation has been identified in Syria, according to commercial satellite photos, providing new evidence that Damascus may have been pursuing atomic weapons before a 2007 Israeli military strike.

The publishing Wednesday of the photos by Washington's Institute for Science and International Security could increase pressure on the United Nations to demand expansive new inspections of suspect Syrian facilities during a March board meeting of the International Atomic Energy Agency. 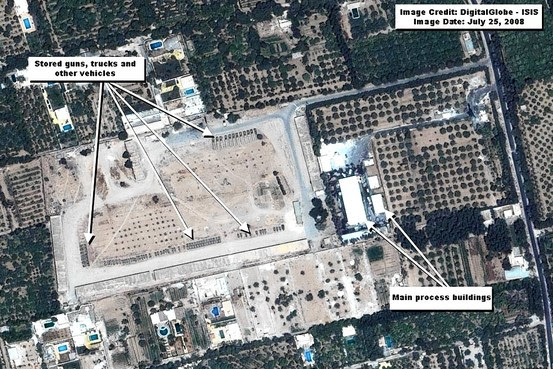 Syrian President Bashar al-Assad's government has rebuffed repeated IAEA requests to conduct additional inspections of the site as well as three other facilities the U.N. agency believes could be related to a covert Syrian nuclear program. Damascus's rejection of IAEA inspections could result in Syria being declared noncompliant with its U.N. commitments and referred to the Security Council for formal censuring.

Mr. Assad denied in an interview with The Wall Street Journal last month that his government has pursued a nuclear program. He also said he wouldn't allow the IAEA expansive powers to inspect his country.

The photos published by the ISIS think tank identifies what it says are one of the three additional sites the IAEA believes could be connected to the Dair Alzour facility. In a series of photos, ISIS displays what it alleges were apparent Syrian attempts to disguise the activities of site after the Israeli attack.

"Laying down a new foundation could be an attempt to defeat the environmental sampling the IAEA inspectors would like to carry out to see if uranium was present," the ISIS report reads.

ISIS says the location and contours of the building suggests it housed uranium-conversion equipment that is used to produce nuclear fuel. The facility, in a town called Marj as Sultan, is on the outskirts of Syria's capital, Damascus.

ISIS said it located the site using commercial satellite images based on information provided by sources at the IAEA as well as by a report in the German newspaper, Sueddeutsche Zeitung.

IAEA Director General Yukiya Amano has said in recent months that he'd consider calling for a so-called special inspection of Syrian sites if Damascus continues to deny U.N. staff entry. Syria could then be referred to the Security Council, if it again refused the IAEA's request.

Diplomats at the IAEA said Mr. Amano is also considering releasing a report at the March meeting that would detail what the agency says is evidence that Syria was secretly developing a nuclear reactor. Such a move is viewed as less of a political risk than a call for a special inspection, but still could result in Security Council action at a later date.

Copyright - Original materials copyright (c) by the authors.
Posted by Sally Zahav at 12:42 AM