Will Their Armies Save (Some) Arab States from Islamism? 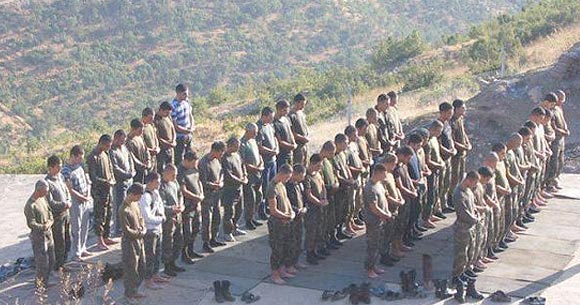 Caption: Soldiers of Turkey’s once-secular army holding official prayers as the Islamist regime transforms it into a reliable Islamist force.

Nowhere in the world is Mao Zedong’s dictum that political power grows out of the barrel of a gun truer than in the Middle East.

The armed forces have been the basis of power in the Arabic-speaking world and in Turkey, too. That’s why the nationalist dictatorships and traditionalist monarchies, which had seen so many coups and coup attempts in the 1950s and 1960s, had to find special ways to control the armed forces. They did so by special privileges, close intelligence watches, promoting officers on the basis of loyalty to the regime, and many other measures.

One of these was the creation of elite, parallel military formations. Examples include the Iranian Islamic Revolutionary Guard Corps (IRGC), the Iraqi Republican Guard, the Saudi “White Army,” and others.

During the “Arab Spring” there has not been a single revolution in the usual sense of the word. In Egypt and Tunisia, what we have seen are essentially coups. The armed forces both used the mass demonstrations and responded to them by seizing power. In Libya, a rebel army was basically handed power by NATO. But where the army remained loyal, as in Jordan, Saudi Arabia, and — so far but perhaps shakily — Syria, the regime remained in power.

This analysis raises the question of whether the army is going to remain in control of Egypt and Tunisia. In this situation, neither “revolution” nor elections nor revolutionary Islamist groups really matter. The soldiers are still the boss. Change, then, is more illusory than real and there is far less to fear.

Such an analysis is viable; it might be true; it might even be, from an international strategic perspective, the best outcome. While a stable, non-repressive, and non-aggressive democracy that benefited large numbers of people is preferable, what if it isn’t possible?

Here’s a chart to get a clear picture of the situation:

WHO RULES THE GUNS?

Before discussing Egypt and Tunisia, however, I should explain why this idea of the army regulating Islamists doesn’t apply to other countries. In Libya, the rebels are the army now and many of them are radical Islamists whose loyalty to civilian authorities is close to zero. Since Libya has its own income, it is not the semi-slave of foreign aid that would restrict its government from doing as it pleases regardless of Western dissatisfaction.

As for Turkey, it could be a model contradicting the military-in-control thesis. After all, that is precisely the system that did exist in Turkey for decades, with the army as the ultimate custodian of the republic. The Islamist regime — with a lot of foolish Western “help” — has broken the army. Massive arrests are intimidating and weakening the officer corps. If in power long enough, the Islamists will step by step take over the army from the inside by promoting both ideologically loyal and opportunistic officers. It’s too late for a coup.

At this point, an army coup is not a solution in Syria. Either the regime will remain in power or there will be a revolution. Some fresh faces at the top are unlikely to quell the protests. It will still be the Alawite-dominated regime that has ruled Syria for almost fifty years. A split in the army (which has already happened to some extent) brings a civil war closer.

What about Egypt and Tunisia? In Egypt, the army has been the backbone of the regime for 60 years but it has not wielded direct political power for most of that time. Generals became provincial governors and high administrators after retirement. The army was pampered with privileges and allowed to carry out many profitable economic activities. U.S. aid financed its budget to a large extent and furnished it regularly with new toys.

One can certainly argue that the army in Egypt — and similar things apply to Tunisia — has an interest in being “moderate.” It is more of a pragmatic than a doctrinaire institution, and it knows the cost of war. Islamist demagogues can talk about revolution, invasion, wiping out Israel, and so on, but the officers know that they are unlikely to win.

Note that this situation doesn’t require the officers to have political ambitions. But their interventions have an involuntary edge to them, to protect their privileges and to maintain the law and order that they professionally prefer.

The decision of the Egyptian army to postpone presidential elections to the second half of 2013 is the clearest example of that reluctant political activism. Even if they sincerely intended in past months to turn over power to civilians, the crime and anarchy and extremism unleashed have given them second thoughts.