Hamas Prime Minister in Gaza Haniyeh visited Tehran last February while al-Zahar arrived at the Iranian capital earlier this month. According to the report, the parties discussed the introduction of missiles into the Gaza Strip in preparation for a conflict with Israel, which would enable Hamas to retaliate with rocket fire. Hamas has previously declared it will not take part in a conflict between Israel and Iran.

According to the report, Iran pledged to increase financial aid to Gaza and as a first step provided Hamas with $33 million immediately after Haniyeh's visit. Sources told al- Mustaqbal that Iran is working to sabotage Palestinian reconciliation efforts for fear of its effect on the Gaza Strip. Fatah has made a similar claim. 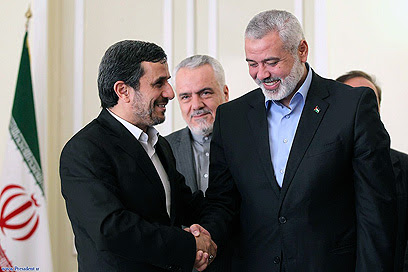 It should be noted that the paper is associated with former Lebanese Prime Minister Saad Hariri, who holds anti-Iran views.

Mashaal visited Turkey this month and called for Palestinian unity. He said that the struggle against Israel will continue in the political-diplomatic arena and did not mention armed resistance.