While the Muslim Brotherhood is still settling in in Egypt, Israel must imprint a stable precedent for action and establish a more durable framework for dialogue. 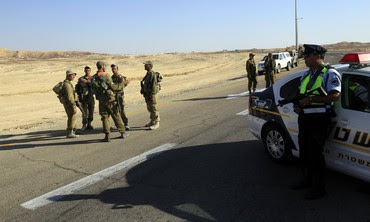 
Today Israel’s politicians need to reorient themselves to a re-engagement policy in Gaza. Overcoming the trauma of disengagement and the world’s condemnation in the wake of Operation Cast Lead, Middle Israel must come to the realization that disengaging from Gaza didn’t mean Gaza disengaged from Israel.

Israel will have to come to grips with the basic fact that Hamas is implacable, that no hudna, no summit and no piece of paper will stop the growing violence we are witnessing in the south. Retaking the narrative, defeating Hamas and regaining the initiative requires prudent policy which begins at the source of Israel’s immediate instability.

The Philadelphi bridge of terror, now bustling, quickly becomes Israel’s first order of business. This bridge must be destroyed, sending the clearest signal to Egypt that Israel will always act vigorously in its own defense.

Re-engaging Gaza begins in Philadelphi and ends in Cairo. Severing Hamas’ weapons supply route will fundamentally alter its strategic orientation. By asserting control over its entire border, Israel will be able to set the tone for what is sure to be a very tenuous relationship with the Muslim Brotherhood now in power. Dividing Egypt from Gaza today will be the fullest expression Israel can send to this revolutionary government in Egypt that Israel is interested in stability that is reinforced by prudent security policies.

A TWO-hour drive south of Tel-Aviv lies a 14 km.

strip of land that sits between Gaza and Egypt, known as the Philadelphi Corridor. Since 2008, this border zone has been controlled by Hamas, and a limited Egyptian presence. Hamas and the Muslim Brotherhood, which founded Hamas, sharing these 14 km. inherently spells disaster for Israel’s long-term stability.

Looking further down the road, ignoring the strategic significance of Philadelphi will give Mohamed Mursi a lever of soft power, very similar to how Iran uses Hezbollah as a proxy, to disrupt, deflect and destabilize Israel with.

In 2005, Ariel Sharon undertook a sweeping policy to completely disengage from Gaza. This meant many things; an ethnic transfer of a multi-generational Jewish population (many still dispossessed), destruction of costly infrastructure and finally, the removal of its border guard on the Philadelphia Corridor.

Today in Israel, the disengagement is understood by the majority to have been a failure. However we consider both the security and diplomatic implications involved, Israelis now understand that the Gaza retreat made it far more difficult to control the events in and out of Gaza. The ethical questions surrounding population transfer remain, debate over the fallout of the Mavi Marmara incident continues, but there is a general consensus regarding the failure of pulling out from the Philadelphi corridor, the results of which Israel’s entire south today suffer.

Public opinion in Israel today would back a reengagement of Gaza along the lines of retaking the strategic Philadelphi Corridor.

ISRAEL HAS every right to secure the Philadelphi Corridor.

The accords it signed with Egypt following its withdrawal were not an amendment to the Sinai peace agreement. The 1979 peace deal made clear that Israel maintains control of this particular strip of land.

As for the understanding with the Palestinian Authority, which was given custodianship, they are no longer there, are no longer the custodians, which de-facto nullifies any agreement on the matter between Israel and the PA. In diplomatic speech, Israel has freedom of action.

Militarily it is familiar with this terrain, it’s now a question of political will. Retaking the corridor thus revolves around Israeli leaders’ ability to accept a new reality and swing into the right frame to engage it.

As for Hamas providing the moral case for Israel’s return to the Philadelphi, the sheer amount of weapons which flow through this border crossing, ultimately ending up landing in townships across southern Israel, is justification enough.

The lawlessness in the Sinai peninsula allows for increased weapons smuggling into Gaza. Some items worth mentioning are taken from huge, unsecured arms depots in postwar Libya, including advanced SA-24 shoulder-launched ground-to-air missiles.

Yoram Cohen, the head of the Israel Security Agency (Shin Bet), described the Libyan depots as “the new gate to hell.”

Given the magnitude of instability in Sinai and Gaza, Israel has little choice but to sever this conduit of terror and retain ultimate control of Gaza’s borders until such time as a peaceful government can reign responsibly inside Gaza.

Considering the powerful backlash Israel received when it left Gaza, when it was accused of causing a humanitarian crisis, Israel’s border guards must be prepared to administer a border where transit of goods and services need to be maintained in the face of danger. Outsourcing much of the administration of the crossing to bonafide international organizations and legitimate NGOs will significantly reduce friction and deter Hamas freedom of action.

A RE-ENGAGEMENT policy toward Gaza means taking the battle into Gaza, thereby forcing Hamas to dedicate its energies to Israel’s military presence there rather than to Israel’s home front as it does now. It is a far better scenario for Israel to employ the Iron Dome defending the Philadelphia Corridor than to defend playgrounds, schools and hospitals.

Finally, defeating Hamas, at least as an effective paramilitary agent, can only be effective if Israel actually controls all Gaza’s access points. Egypt has proven to be utterly ineffectual, and Israel cannot really believe this situation will improve under an Islamic Brotherhood-run Egypt. After Mursi consolidates his power, the opposite will be the case.

For those who truly desire peace, Israel is the only responsible agent to ensure Gaza becomes a functioning society as well as a stable, demilitarized territory down the road.

Before undertaking the aforementioned policy, Israel’s leadership needs to reorient itself to a new southern Muslim Brotherhood reality. As the Islamic Brotherhood enters a phase of power consolidation, Israel has a small window to institute a mode of conduct that the Muslim Brotherhood will have to adjust to in order to deal effectively with Israel.

While the Muslim Brotherhood is still settling in in Egypt, Israel must imprint a stable precedent for action and establish a more durable framework for dialogue. This small window can best be exploited by re-engaging Gaza, retaking the Philadelphi Corridor and regaining control of its borders. All of which are essential ingredients to a new national security posture in a region growing more and more hostile to Jewish sovereignty.
Ariel Harkham is the co-founder of the Jewish National Initiative.