Both outgoing US secretary of defense and military chief Dempsey testify before Senate C'tee that they supported Clinton plan to arm rebels; Syrian jets bombard Damascus in effort to halt rebel advance, 46 dead. 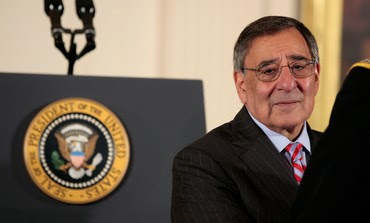 
The Obama administration’s two top defense officials publicly acknowledged a policy disagreement with the White House over whether to send US arms to the rebels in Syria.

In congressional testimony on Thursday, US Secretary of Defense Leon Panetta, who is retiring, and General Martin Dempsey, the chairman of the Joint Chiefs of Staff, both said they supported a plan last year by then-Secretary of State Hillary Clinton and then-CIA Director David Petraeus to provide weapons to the rebels fighting to overthrow Syrian President Bashar Assad.

Their comments before the Senate Armed Services Committee came in response to a question from Republican Senator John McCain of Arizona, who has been a leading critic of the Obama administration for failing to do more to help the Syrian rebels who are heavily outgunned by Assad’s forces.

Their response to McCain’s question about whether they supported the Clinton-Petraeus plan was direct and terse.

Asked about disagreement over whether to arm the rebels, State Department spokeswoman Victoria Nuland told reporters at a briefing today that she won’t comment on “internal policy discussions.”
Administration officials, such as Nuland, have said that the US assistance to the Syrians is limited to humanitarian aid and non-lethal equipment for the rebels, while some other nations may be providing weapons.

Meanwhile on Thursday, Syrian government jets bombarded the Damascus ring road in a bid to halt a rebel advance which threatens Assad's hold on the capital, insurgent commanders and opposition activists said.

Warplanes fired rockets at southern parts of the route where rebels have spent the past 36 hours overrunning army positions and road blocks encircling the heart of the city, the site of key state security and intelligence installations.

Assad, battling to crush a 22-month-old revolt in which 60,000 people have died, has lost control of large parts of the country but his forces, backed by air power, have so far kept rebels away from the center of Damascus.

World powers fear the conflict - the longest and deadliest of the uprisings that started spreading through the Arab world two years ago - could envelop Syria's neighbors, further destabilizing an already explosive region.

"The regime really wants its positions on the ring road back. It is a major defense line for the capital," Aby Ghazi, a rebel commander based in the eastern suburb of Irbreen told Reuters.

Ghazi said the rebels have reached the edges of the city's main Abbaside Square where the Syrian military had turned a football stadium into barracks.

Units of Assad's elite Republican Guard based on the imposing Qasioun Mountain overlooking the capital fired artillery rounds and rockets at Jobar, an eastern neighborhood bordering the square, and at the ring road, rebel and activist sources said.

Damascus residents, long accustomed to the sounds of war, said Thursday's shelling was some of the heaviest they had heard.

"They've gone insane. All of them. They're insane," one central Damascus resident said by telephone.

Activists said 46 people had died on Thursday, mostly from heavy army bombardment on the contested neighborhoods of Jobar and Zamalka which are near compounds housing Alawite forces.

One rebel commander told Reuters the insurgents were not trying to take the capital with the current push.

"The objective is to take out the sniper positions and fortifications that form part of the regime's defense line on Damascus, not to advance too quickly without having the proper support," said Captain Islam Alloush of the Liwa al-Islam rebel unit.

Another opposition activist in Damascus said the offensive was being led by Sunni officers who had defected from the army and wanted to cut Assad's command and control lines from the center of the city to its outskirts.

The rebels are using anti-aircraft guns, mortar rounds and armored vehicles captured from Assad's forces over the past few months, according to opposition sources.

Copyright - Original materials copyright (c) by the authors.
Posted by Sally Zahav at 2:09 AM