How Water Became a Weapon in Arab-Israeli Conflict 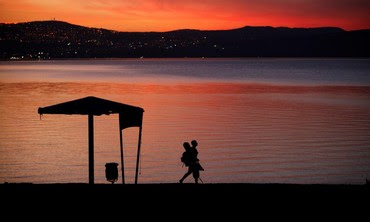 Sunset at the kinneret Photo: REUTERS/Ammar Awad
The conflict between the Palestinians and Israel is fought on many fronts nowadays. This is the result of a change in strategy decided on by the current Palestinian Authority leadership in 2008. A 2008 report by The Palestinian Strategy Group, which advises the PA, called “Regaining the Initiative” formed the basis of this strategic overhaul in PA politics vis-à-vis Israel.

According to the report, the negotiation route standard between 1988 and 2008 was to be shut down indefinitely and terror (termed “resistance” by the PSG) would be replaced by a more sophisticated “threat power.” This would entail the refusal to cooperate and the push for boycotts.

Another important element in the new strategy was eliciting more third-party support and ensuring the Palestinian discourse would be the primary viewpoint in the discussion about the “Palestinian national project.”

Cognitive warfare, a form of propaganda, has become a successful element in this Palestinian attempt to elicit third-party support. Disinformation about the Israeli settlements in the West Bank spearheaded this campaign.

Today much of the world is convinced that the Israeli settlements are the main reason for the absence of peace.

UNTIL NOW much of the literature about the water conflict followed either the Palestinian discourse (vast majority) or the Israeli discourse (small minority).

However, a thesis titled “The Politicization of the Oslo Water Agreement,” written by Lauro Burkart, a Swiss graduate of the Institute of International and Development studies in Geneva gives a more accurate and impartial picture of the topic of the scarcity of water in the Palestinian Authority.

Burkart interviewed many key players in the water conflict, Palestinians and Israelis as well as representatives of NGOs and the donor countries. He also examined many original documents such as the minutes of the meetings of the joint Israeli Palestinian Water Committee (JWC).

Here are some of the most important conclusions in Burkart’s thesis:

• The goals of the Oslo II water agreement have been reached regarding the quantities of water provided to the Palestinian population (178 mcm/year in 2006). The Oslo water agreement estimated that demand would eventually reach 200 mcm/year.

• The JWC functioned well in the first years following signature of the agreement, but since 2008 cooperation has come to a halt.

• The facts disseminated by the Palestinians, international organizations and donors about the root causes of the water scarcity in the West Bank are incorrect.

He cites the pro-Palestinian NGO Aman, that concluded that there is “no clear legal separation between the political and executive levels within the Palestinian water institutions. To date there is no real functioning water law. Furthermore the National Water Council is not meeting and not functioning well.”

Although the PWA embarked on an institutional reform process in reaction to international critics such as the World Bank this did not solve the issue of mismanagement within the institution. The head of the Palestinian Hydrology Group called the reform a “fundraising mechanism.”

The PWA also did not manage to gain control over many municipalities (where Israel has no control) due to the autocratic and undemocratic manner in which they are managed. These power holders did not want to lose control of the water systems since it was one of the main services provided by the municipalities.

As a result the water supply is not centralized and illegal drilling is rampant. The fact that the PA pays most of the water bills of the Palestinian population gives no incentive for saving and leads to an unreasonable use of water in the domestic sphere as well as in the agricultural sector.

BURKART ALSO interviewed Dr. Shaddad Attili, head of the PWA, who was appointed in 2008. Attili, a Fatah member, is responsible for the de facto ending of the cooperation with Israel in order to bolster Palestinian water rights claims. He did this to strengthen the position of Fatah after the Hamas victory in the Palestinian elections.

This policy is conducted at the expense of the marginalized and peripheral Palestinian population which is suffering from water shortages. Burkart writes that the abundance of donor money allowed Atilli to continue the noncooperation strategy which has lead to a complete stagnation of the water negotiations during the past five years.

One of the results of the refusal to cooperate with Israel is that almost all of the 52 mcm of waste water generated by the Palestinian population flows untreated into Israel and the West Bank, where it contaminates shared groundwater resources. Nevertheless, the Palestinians claim that Israel is blocking their waste water infrastructure.

The facts are that most of the Palestinian waste water treatment and reuse projects have already received foreign funding and were supported by Israel.

The PA, however, has not taken sufficient action to execute those projects. Instead the PA claims Israel is demanding an unreasonably high level of treatment (BOD 10/10).

A JWC memorandum of understanding from 2003, however, which was signed by both parties, agreed on a gradual process to achieve this standard (starting with BOD 20/30).

Following a meeting in November 2011 between Colonel Avi Shalev of the Civil Administration and PWA officials about the implementation of Palestinian water projects, Israel offered to finance water and waste water projects that would serve Palestinian communities in the West Bank. The Palestinians didn’t respond.

Another solution that could solve the water crisis in the PA is seawater desalination. In fact Israel made an offer to the Palestinians to build a desalination plant in Hadera south of Haifa and pump the desalinated water to the northern West Bank. The Palestinians rejected this solution since it would put Israel in an upstream position to the West Bank. Another reason for this rejection has to do with water rights since the Palestinians claim the Mountain Aquifers.

Attili even withdrew a PWA expert team from an Israeli desalination program using the argument that Israel had unilaterally destroyed a number of illegal wells on the West Bank. This proved to be another example of Attili’s propaganda campaign.

Israel responded after Attili complained about the wells in a letter to the international community. The decision to shut down these wells was taken by the Joint Water Committee. After that several reminders were sent to the PWA which reiterated its intention to execute the JWC decision. Nothing happened, however. Four years after the decision was taken Israel decided to execute the decision since illegal drilling diminishes the amount of water produced by legal wells and damages the main aquifers.

It is obvious that Attili’s non-cooperation strategy is connected to the overall change in strategy vis-à-vis Israel in 2008 by the PA. Water has become a weapon against the so-called Israeli occupation.

This is strange; if a Swiss graduate was able to get access to all the relevant information, why did the European Union, with all of its resources, not do the same? Had it done so there is no doubt the EU would have found out who really is to blame.

The EU has allocated funds for at least seven waste water treatment plants. It is reasonable to assume that the Europeans would have some oversight on the execution of these projects – so why did they not demand accountability from the PWA? In fact the PA has now been given a free pass to use water as a weapon against Israel. By doing so, the international community is in fact contributing to the aggravation of the conflict and harming the interests of the Palestinian population.


Yochanan Visser is a freelance journalist and the director of Missing Peace Information, an independent news agency based in Gush Etzion. y.visser@missingpeace.eu