The 'Guardian' reports that Israel will ask US president during visit to use airstrikes to prevent weapons transfers to Hezbollah. 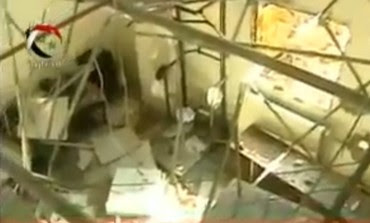 Syrian site reportedly bombed by IAF. Photo: YouTube Screenshot
Israel will request from US President Barack Obama during his upcoming visit that the US carry out airstrikes on Syria in the event that Syrian missiles are being transferred to Hezbollah, the Guardian reported on Sunday.

The report added that Israel would ask for US support for Israeli strikes on Syria to prevent such weapons transfer if the US was not willing to do so itself.

The Guardian quoted an Israeli official as saying,  "Maybe it would be better if Israel doesn't do it, but who is going to deal with it? These missiles are not just a problem for Israel. They include [anti-ship] missiles, and who has the biggest navy in the Mediterranean?" the official added in reference to the US.

The Guardian reported that it was not likely the US would be willing to strike Syria, unless a transfer of chemical weapons was involved.

Israel allegedly carried out a strike on a convoy of SA-17 anti-aircraft missiles and their launchers en route to Lebanon from Syria last month.

The Guardian reported that Israel planned to lobby for US support for more pre-emptive strikes even if it were to risk igniting a war with Hezbollah in Lebanon.

"What I hear over and over again from Israeli generals is that another war with Hezbollah is inevitable," a western diplomat was quoted by the Guardian as saying.