The Region: Where is Egypt’s Crisis Heading?


None of the many articles pointing to the disaster in Egypt have mentioned this was all totally predictable and yet no one in the establishment predicted it. 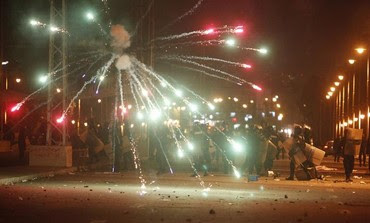 Egyptian protesters throw fireworks at police,
Feb. 1, 2013 Photo: REUTERS/Asmaa Waguih
There’s no doubt about the growing crisis in Egypt. Here are four dispatches from a 24-hour period: AP: “A ferocious fight between members of Egypt’s Muslim Brotherhood and their opponents near the group’s Cairo headquarters...could mark a dangerous turning point... raising worries that the confrontation between Islamists, who dominate power in the country, and their opponents is moving out of anyone’s control.”

Then there’s The International Herald Tribune’s “Fall in Egyptian Pound Weighs Heavily on the Ill,” which speaks of “a shortage of an estimated 400 different drugs, some of which are considered lifesaving....”

So even with an almost $5 billion IMF loan supposedly on the way – none of which will ever be repaid, meaning taking away from Western economies to prop up an Islamist anti-American regime – the prospects aren’t good.

However, there are a few things that seem to have been missed.

First of all, none of the many articles pointing to the disaster in Egypt have mentioned this was all totally predictable and yet no one in the establishment – the “herd-news,” to coin a phrase – predicted it. There is no reflection on how mistaken enthusiasm for an Egyptian revolution helped transform a mildly repressive pro- Western regime that managed Egypt’s economy as well as possible into an Islamist-dominated half-dictatorship, half-anarchy disaster.

If you don’t acknowledge making big mistakes, people, you can’t correct them, or avoid them next time.

One reason this is important is that the same thing is about to happen in Syria. And I don’t say that because I regret the fall of the anti-Western radical Assad regime, but because I shudder at what is to come.

The second missing aspect is analysis of what all this chaos means. (It does not mean a stable democracy, that’s for sure.) Let’s examine the record of Middle East countries in this situation. Again, mind you, what’s going to happen is totally predictable.

Ideally, of course, the forces in Egypt will say, “Let’s stop acting so silly! Let’s all be nice to each other and create a representative republic and pull together to fix the crisis.”

That’s the kind of fantasy usually reserved by the West for the “peace process.” In Egypt’s case it is too obviously nonsense for anyone – except editorialists who tell people what they “should” do – to take seriously.

Alternatively, the best chance, in theory, is a military coup. Let’s remember that the Egyptian army is what people have been badmouthing for two years now, and that Western governments have worked hard to prevent it attaining any real political power. The destruction of the Turkish armed forces’ political role – far more positive than that of Egypt’s equivalent – has also been achieved.

The army might some day step in but, after all, that would just bring us full circle to 1952, the last time it happened in Cairo, creating a regime that lasted almost six decades. Besides, the army is inhibited by concern that such an action might set off a civil war that would make Syria look like a picnic in terms of bloodshed – though the army would eventually win. And the Egyptian army is not institutionally moderate either. It includes growing Islamist forces among its officers and is mainly concerned about its own economic holdings.

So what’s left? Well, the moderates can’t win, but the Islamists can. The Brotherhood is not going to give up power and the Salafists look forward to a chance to kill various categories of Egyptian citizenry.

The worst but by no means impossible outcome, then, is that the Muslim Brotherhood will suspend democracy – in practice if not in theory – and with the help of the other Salafists will crush moderates, which means Christians and anyone dreaming of equal rights for women.

It is vital to understand that there is no real solution for Egypt’s economy. There is no policy that a government might follow – especially once the country has become unstable – that would work. There are too many people; too few resources. Labor discipline and productivity simply cannot compete with Asia. Massive subsidies needed to avoid a violent explosion eat up all the aid money.

After the $5b. from the IMF has been spent, Egypt will be no better off economically.

What happens when Middle East states become ungovernable for political or economic reasons, or both? There’s a long list of examples. But there’s one common factor. Can you guess what it is?

Time’s up! It’s turning up the demagoguery against foreign scapegoats and getting involved in foreign adventures to mobilize support for the regime (which is incompetent at solving domestic crises). This sometimes leads to war.

Moderates or any non-Islamist will be accused of being a foreign agent and being involved in economic and social sabotage to ensure they are thoroughly discredited.

Now this prediction might not come to pass. But it is certainly the most reasonable analysis, especially when the Egyptian regime could link up with a Syrian counterpart and – if they solve their current spat – Hamas, which rules the Gaza Strip.

Obviously, this presents serious challenges to Israel. On one hand, Israel has no influence on what happens in Egypt or Syria. Does anyone really believe that “solving the Israel-Palestinian conflict” will fix these issues? Well, yes, all too many people say they believe that, especially in Western policymaking circles. But the difference is that far fewer believe that any longer.

On the other hand, Israel is going to have to face angry, hostile regimes in Egypt, the Gaza Strip, Lebanon, Syria and Iran.

Fortunately, these regimes will be in two different – Sunni and Shia – camps. Equally, as they wreck their own countries they are less able to form a conventional military threat.

And as they spend most of their energy on internal battles over power, they have fewer resources for foreign adventures. The problem, of course, is in the unconventional – terrorism, guerrilla warfare and possibly ultimately nuclear weapons.

REUTERS/Asmaa Waguih is the director of the Global Research in International Affairs (GLORIA) Center. www.gloria-center.org