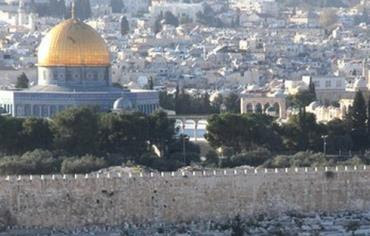 The Palestinian Authority on Wednesday stepped up its rhetorical attacks on Israel concerning the Temple Mount, condemning visits by Jews to the holy site as a provocation.

A spokesman for the PA government in Ramallah warned that permitting Jews to enter the Temple Mount was a "green light to settlers to escalate their assaults against Palestinians and their holy sites and properties."

The PA claims that the visits by Jews to the Temple Mount are part of an Israeli scheme to "Judaize and divide" the holy site with the ultimate goal of rebuilding a Jewish Temple.
The visits are described by the PA-controlled media as attempts by "hordes of settlers and Jewish extremists to storm and desecrate the Aqsa Mosque."

The PA campaign against Jewish visitors has triggered several violent protests at the Temple Mount over the past few months.

The Jerusalem Police have arrested dozens of Palestinians involved in the rioting and incitement and some have even been served with court orders to stay away from the Temple Mount.

But these measures have hardly contributed to easing tensions as the PA leadership appears to be intent on escalating its campaign.

On Tuesday, a group linked to PA President Mahmoud Abbas's ruling Fatah faction went as far as calling for "fedayeen [guerilla] operations" against Israel on Friday in protest against the visits by Jews to the Temple Mount.

The PA leadership has yet to distance itself from this call by the Aqsa Martyrs Brigades to launch terror attacks against Israel.

It's not clear at this stage if the group's threat to renew terror attacks against Israel is real.
But the latest threat should be seen in the context of the Palestinians' drive to prevent Jews from entering the Temple Mount.

What is the PA trying to achieve through this campaign?

First, the PA leadership is trying to show Palestinians and all Muslims that it is keen on defending Islamic holy sites against Israeli "conspiracies" at a time when the Arab and Islamic countries are doing nothing.

Second, the PA is probably trying to divert attention from its controversial decision to resume the peace talks with Israel. The PA has come under heavy criticism for dropping its pre-conditions for returning to the negotiations, including a full cessation of settlement construction.

Third, the campaign is designed to depict Israel as a country that has no respect for other people's religion and holy sites. This would make it easier for the PA to demand control not only over the Temple Mount, but also over east Jerusalem under the pretext that Israel is violating international laws and conventions in the city.

This campaign surrounding one of Islam's most holiest sites could also result in another wave of violence or, even worse, a third intifada. The second uprising, called the Aqsa Intifada, erupted after the PA leadership waged a similar campaign, telling Palestinians back then that Israel was seeking to destroy the Aqsa Mosque.