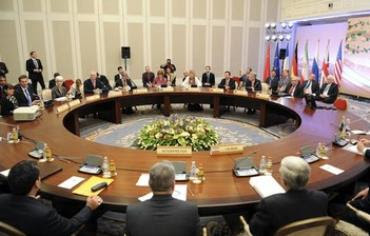 "The previous P5+1 plan given to Iran belongs to history and they must enter talks with a new point of view," Foreign Minister Mohammad Javad Zarif said in an interview with Iranian state television late on Saturday.

"The players must put away this illusion that they can impose anything on the Iranian people."

The United States wants Iran to respond to proposals by world powers in February as a starting point for talks. If the parties cannot agree on how to start the negotiations, it casts doubt on whether a resolution can be agreed within the six months in which Iranian President Hassan Rouhani says he wants a deal.

Britain, China, France, Russia and the United States - the five permanent members of the United Nations Security Council - plus Germany, the so-called P5+1, said in February they want Iran to stop enrichment of uranium to 20 percent, ship out some stockpiles and shutter a facility where such enrichment is done.

In return, they offered relaxation of international sanctions on Iran's petrochemicals and trade in gold and other precious metals.

US officials said last week Secretary of State John Kerry had secured agreement from his Chinese counterpart calling for Iran to respond positively to existing nuclear proposals by the six powers.

According to Zarif, "Iranian people have completely lost their confidence in the West," he added that the coming nuclear talks "could be a good start" for reversing that sentiment, ISNA cited the minister as saying.

"The West should deal seriously with the Iranian nuclear issue and that requires it to change its views," Zarif added.

The election of Rouhani in June and his appointment of US-educated Zarif as foreign minister and chief nuclear negotiator have raised hopes for a solution to the decade-old dispute over Iran's nuclear program.

Each side wants the other to make the first move.

"There is a new tone (in Iran), we want it to be sincere but we need to see deeds," French Foreign Minister Laurent Fabius told Europe 1 radio on Sunday.

But, he said, there was limited time to resolve the dispute while maintaining the Western goal of ensuring Iran is not able to make nuclear arms. That was because the heavy water reactor in Arak, in western Iran would be able to produce plutonium.

"If it were completed we wouldn't be able to destroy it because if you bomb plutonium it will leak. This means it's a race against time," he said.

Asked how much time he thought there was, Fabius said; "People say roughly a year ... We hope there will be a negotiation, but we must act quickly."

Rouhani and Zarif tried to dispel mistrust with meetings, speeches and interviews at the UN General Assembly in New York last month, was capped with a phone call between the Iranian president and US President Barack Obama.

Both presidents face opposition at home from conservatives who fear they may be too willing to grant concessions before the other side takes tangible steps.

Iran's Supreme Leader Ayatollah Ali Khamenei, who has the final say on the nuclear issue, said on Saturday he supported Rouhani's diplomatic opening with the United States.

But he said some aspects of it were "not proper". Khamenei did not elaborate on his objections, but it was a possible reference to the phone conversation between Rouhani and Obama.

The supreme leader also said he did not trust the United States as a negotiating partner, a sentiment echoed by Zarif.

"Just as the supreme leader said, we do not trust them, and they must build the trust of the Iranian people towards them in public and private discussions," Zarif said.