French-Speaking Jihad Fighters In Syria: 'France, Soon It Will Be Your Turn'

This report is offered as a complementary sample from MEMRI's Jihad and Terrorism Threat Monitor (JTTM); to subscribe to the JTTM, visit http://www.memrijttm.org/content/en/about_memri.htm or contact us at jttm@memri.org. To read future reports you must be a full member of the JTTM.

Among the jihadis fighting in Syria are French-speaking Europeans, mostly from France and Belgium. Some of these individuals are active on social media, where they provide detailed information about their journey to Syria and about their experiences there: their daily lives, their training routine, and their experiences on the battlefield fighting not only the Syrian regime forces but also the Free Syrian Army and the Kurdish PKK.  They urge their fellow European Muslims to come fight in Syria, and answer questions by would-be recruits, often chatting with them in real time.
Posted on Facebook and Twitter rather than on password-protected Islamist forums, the messages are directly accessible to the general public and not just to a closed community, and are obviously aimed at recruitment. In casual and often jocular language typical of messages on social media, the authors paint a rosy picture of life on the front, stressing the pious atmosphere and the sense of brotherhood-in-arms shared by the fighters. They note that recruits may come with their wives and children, and stress the practical advantages of joining the jihad community in Syria, such as the prospect of finding a bride and the low cost of living.
At the same time, the messages also contain the usual tropes of jihadi discourse: the authors stress that they are fighting the "infidels" with the ultimate aim of establishing the Islamic Caliphate, rebuke fellow Muslims who fail to do their duty of fighting jihad, express their willingness and even desire to be martyred for the sake of Allah, and voice threats against those they perceive as their enemies, including Western countries.
The following are excerpts from messages by several French-speaking jihadis that are fighting in the ranks of the Islamic State of Iraq and Syria (ISIS).

Aba Souleyman To Muslims In France And Belgium: "Leave Before It's Too Late"


"Aba Souleyman"[1] is a French-speaking European (most likely Belgian) who has been in Syria since August 2013. The information he has divulged on his Facebook page suggests he his fighting for the ISIS in northern Syria, near the border town of A'zaz, and living with his wife in the Aleppo suburbs. On October 23, 2013, he posted a message urging Muslims in Europe to come to Syria to join the jihad. He wrote: "This message is for my Muslim brothers in France, Belgium and elsewhere who have not yet joined us here in Syria but are thinking about it. Those who are not even considering it have heart disease that only Allah can remove."[2]
One of his Facebook  friends, Wassime Ibn Rachid,[3] asked Aba Souleyman about taking his wife with him to Syria: "Some brothers are married and are afraid to emigrate...[4] They fear that their wives might be raped [in Syria]... or something... [or] that they will be forced to live apart... Please, brother, give us details about what life is like for a couple [in Syria]." Aba Souleyman answered: "I had my wife with me from the start, and praise Allah it is going very well. When you are married, the Dawla [ISIS] immediately finds you a home, or you can rent an apartment for €25. You try to find fellow French-speaking brothers who are living [here] with their wives and you settle in near them. As for your fears, you can rest assured, because you will never [have to] cross areas not controlled [by the rebels]. For example, I live in an apartment, and there is another French couple living three minutes away, [as well as] Tunisians, etc. And the women see each other often. When I leave for the front or whatever, my wife leaves to stay with a sister, and vice versa. They are never alone. You can leave her a gun or a grenade if you really want to feel secure. In Aleppo there are more people, so it is a little more dangerous, but in the suburbs it is fine. They [ISIS] are even planning to open a madrassa [religious school], with Allah's help. Most important, it is a blessing to come with your wife. All the single brothers are looking for wives and want a mouhajira [immigrant woman] lol. I'll tell you honestly, I would prefer for my wife to die gloriously in the bombardments in Syria rather than live in humiliation in some rotten place among the infidels..."[5]

On October 23, 2013, Aba Souleyman chatted on Facebook with an individual named Rachid Belkacem, providing him with information on how to infiltrate Syria from abroad and about living costs and conditions in Syria. The time signatures on the posts indicate that the two were chatting in real time:

Rachid Belkacem: Salam alaikum, brother. Financially speaking, how much [money] should one take, and can you give some details about the trip and the route, with Allah's help? (2:41 pm via mobile)
Aba Souleyman: "Do you intend to come by car? (2:45 pm)"
Rachid Belkacem: "Let's say [I come] by plane to Turkey. What then? October 23 at 2:46 pm via mobile"
Aba Souleyman: "Well, after [that] you take a bus to a town near the border. There you will need a brother on the other side to connect you with someone who will get you in. You can enter [the country] by car or on foot. Sometimes it’s free, [and] sometimes [it costs] $50 per person. (2:50 pm)"
Rachid Belkacem: "May Allah bless you. Financially speaking, what is the situation [in Syria]? (2:51 pm via mobile)"
Aba Souleyman: "You need to factor in the price of travel (by plane or car, it depends), and after that you can wait for the Dawla [ISIS] to give you a Kalashnikov, or you can buy it yourself, which will earn you a greater reward from Allah. A Kalashnikov with full magazines costs about $1,800. As for living expenses, the rent is 25€; if you are single you sleep for free in the HQ with the brothers, and a sandwich costs a mere 1€. So you can calculate [the cost of living], it's easy. (3:05 pm)"
Rachid Belkacem: "Allah bless you. (3:06 pm via mobile)"
Aba Souleyman: "May he bless you.  And as you can see, you can log on to the internet almost everywhere to talk with your family, you will not miss anything, Allah be praised. (3:08 pm)"
Rachid Belkacem: "Inshallah, brother, with Allah's permission we will join you. (4:00pm)"[6]

In other posts, the young jihad fighter also provides colorful details about his life in Syria: he jokes about his three cats, talks of the food at the front and marvels at all the national diversity of the jihad fighters. Yet he focuses on detailed descriptions of the fighting itself: "We spent 'Eid Al-Adha in A'zaz attacking the apostates of the Free Syrian Army. We started the attack with Fajr rockets, and at 10:20 we were already taking ghanima [booty] on the mountain [...] I have spent the last two weeks in A'zaz [fighting] the apostates and the PKK. [...] For four days, my position at the front was 300 meters away from the Turks […] I could see their tanks…"[7]
As his central message, he encourages Muslims in Europe and elsewhere to join the fighting – "You must leave before it is too late"– and reassures those who are afraid to come with their wives and children.  In an October 23 Facebook post he writes: "The day you are stationed at the front or engage in combat, you will feel closer to Allah than ever...  Read the book Virtues of Jihad and trust in Allah. Do not be swayed by [the temptations of] material life or by the family's tears or whatever. On Judgment Day they will not avail you, and if you do not do your duty you will regret it bitterly. And do not postpone your hijra [emigration], because you might die at any moment."[8]
Abou Tasnim: "The Goal Is To Urge Our Brothers In France To Join Us Here"


Another French-speaking fighter who shares his experience on Twitter and Facebook is "Abou Tasnim," who also uses the aliases "Ben Ahmed" and "Salahuddin Shabazz" He is a French national of Haitian origin and is currently fighting for ISIS in Aleppo. He too entered Syria via Turkey, and photos from the journey are posted on his Twitter account, along with photos of his life on the front. Like Aba Souleyman, he answers practical questions from would-be recruits, such as, "Is it easy to find the way?" or "would it be useful to bring pens and clothing for the kids,"[9] and shares details about his everyday life, showing photos of the food he east, for example.  He talks of the shellings and of his plans to undergo commando training, and shares photos of weapons, including one of himself posing with his own Kalashnikov. The photos often show him with another young man whom he describes as his travel companion. They appear to have arrived together. He relates that, as he crossed the border, many insurgent groups sought to recruit him to their ranks, and remarks disapprovingly: "We are here for the Caliphate and these people are promoting their own groups". He shares his experiences daily, with the explicit aim of "urging our brothers from France to join us here."[10] 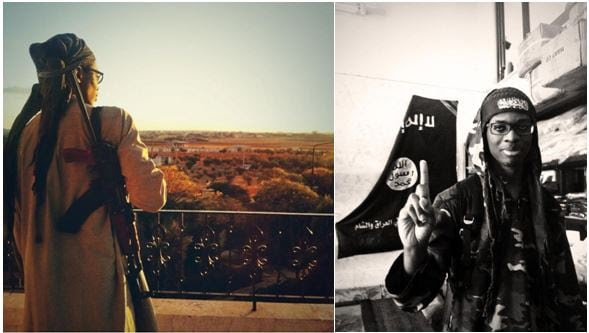 "May Allah Grant Us Martyrdom"


Three other French–speaking jihadis use the names "Abou Shaheed,"[11] "Te Ou"[12] ("where are you") and "Tchechen Noxchi"[13]  (whose name suggests that he is of Chechen origin). Abou Shaheed, the eldest of the three, has been in Syria since May 2013, whereas his friends arrived in late summer. On their Facebook pages they share their impressions from the front, comment on everyday life and post their pictures. They converse with each other and with other French-speaking users, whom they encourage to come to Syria fight the "infidels" and establish the Islamic state.

Abou Shaheed apparently left his wife and children in France, in his brother's care. In one Facebook exchange he says to his brother: "I love you too, little brother. Take care of my little lions so that they never forget their dad. We are in the land of miracles. May Allah grant us martyrdom because victory belongs to Him!"[14]
The messages posted by the three are replete with threats, invocations and prayers for victory and martyrdom, such as: "France, it will soon be your turn"[15]; "We are here to kill the infidels, and may Allah destroy them all by our hands"; "I have no greater wish than for Allah to grant us martyrdom together"[16]; "Victory belongs to Allah and we only desire martyrdom"[17]; "Freedom has but one name: Jihad in the land of Sham! Here everyone sweats [from the efforts of] jihad, and blood has the taste of musk! The Angels took a brother in the city of Homs. Some saw [this] with their own eyes! Allahu Akbar! May Allah grant us martyrdom… Brothers, we await you; time is running out!"[18] 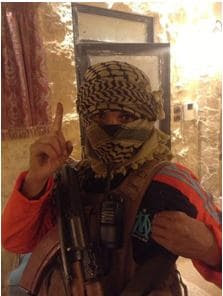 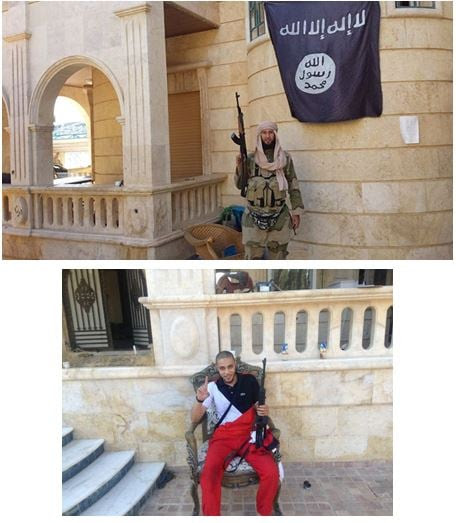