Shifting regional, international alliances will force the Gulf to reconsider its long-term strategy in the Middle East, experts suggest 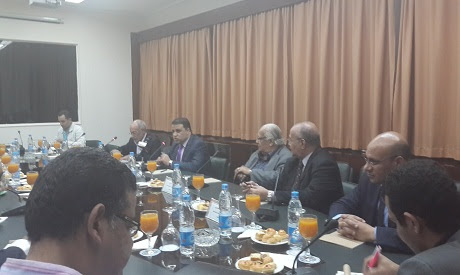 Roundtable held at Al-Ahram paper headquarters on 17 November titled:
"The future of the Arab Gulf in light of current developments" (Photo: Nadeen Shaker)

Despite their regional prominence, Gulf states must reformulate their positions in line with recent strategic changes in the Middle East, experts suggested at a roundtable entitled "The future of the Arab Gulf in light of current developments."

"The Gulf will have to reinvent itself and flesh out a new vision. Many moves are being made, such as the US-Iran rapprochement, the Egypt-Moscow alliance, and talks about a deal between the Gulf countries and Israel. What is the Gulf's position regarding these changes?" Mohamed Idriss, Gulf affairs expert at Al-Ahram Center for Political and Strategic Studies (ACPSS), said during the roundtable at Al-Ahram's headquarters on 17 November.

According to Idriss, the Gulf faces "fateful choices" in light of new regional and international alliances.

Following a détente between the US and Iran at October's UN general assembly, nuclear talks between Iran and the P5+1 – Britain, China, France, Germany, Russia and the US – kicked off on 7-8 November in Geneva. The talks appeared close to clinching a deal before being suspended due to lack of consensus.

Iranian overtures have been eyed with distrust by some, particularly Israel. Though the Gulf states have not been as vocal as Israel in their rejection of the talks, they share the same fears.

"The Gulf states lie in a red zone, shared by a very difficult neighbour: Iran, whose sharp speech and threats affect us on a daily basis," says Abdel Khalek Abdullah, a political science professor at the United Arab Emirates University and guest of honor at Sunday's event.

The experts agreed that the US-Iran rapprochement constitutes a major transformation in the region around which the Gulf must formulate a position. Many feared that a proposed Gulf-Israel alliance is on the horizon.

The Gulf's influential role with regards to the Arab Spring upheavals was also discussed.
Abdullah stated that the Arab world was undergoing what he dubbed a "Gulf moment," a reference to the enormity of the role played by the Gulf states in Arab Spring countries such as Syria, Egypt, and others.

However, the Arab Spring's influence on the Gulf states was weak, and at times, relative.

"The Arab Spring proved that powers representing incumbency and stability are much more dominant than powers of change and revolution, whereby the former can be recalled when they are threatened," Abdullah said.

He added the effect of regional change on the Gulf countries was relative, with Bahrain and Jordon affected the most, followed by Saudi Arabia and Kuwait and then by Qatar and the United Arab Emirates.

El-Sayed Yassin, an expert with ACPSS, noted that the real fate of the Gulf states will only be determined once the Arab Spring uprisings are completed.