IDF authorizes for publication the names of two of the Hamas terrorists involved in kidnapping three Israeli teens. 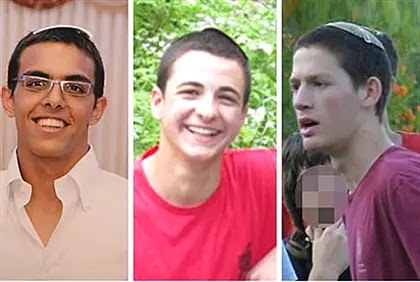 Still missing (left to right): Eyal Yirfah, Gilad Shaar and Naftali Frenkel
Courtesy of the families
The IDF on Thursday evening authorized for publication the identities of two Hamas terrorists being hunted for being “deeply involved” in the kidnappings of Israeli teens Eyal Yifrah (19), Naftali Frenkel (16), and Gilad Sha'ar (16).

The two, Marwan Kawasmeh and Amar Abu Isha, are well-known Hamas terrorists operating in the Hevron area. Security forces are in pursuit of the two, the army said.

Kawasmeh, 29, was first arrested in 2004 for security violations, and since then has been arrested at least four more times. In an interrogation in 2010, he admitted working on behalf of Hamas in the Hevron area. He has participated in Hamas training camps and has helped the terror group to recruit new members.

Amar, 33, was first arrested in 2005, and remained imprisoned until 2006. He was released, only to be arrested again in 2007. His brother was killed while conducting a terror attack in 2005 against an IDF patrol. His father has also been arrested numerous times for security offenses.

Earlier this week, Prime Minister Binyamin Netanyahu said that Israel had “unequivocal proof that the organization responsible for the abduction is Hamas.”

Netanyahu said "we are transferring these proofs to a number of countries around the world. Soon the information will be made public.”

Netanyahu also told UN Secretary-General Ban Ki-moon on Saturday that the information in Israel's hands unequivocally indicates that Hamas is responsible for the abduction of three Israeli teenagers last week, adding that this needs to be expressed in actions on the ground.

Last week, Hamas-Fatah unity government Foreign Minister Riyad al-Malki accused Israel on Friday of not only conducting an "exaggerated" and "political" search for three teens kidnapped by Hamas terrorists last Thursday, but also of fabricating the abduction itself.

"He (Netanyahu) cannot keep blaming one side without showing evidence," Malki said. "When you go to court if you don't show evidence you lose your case," said Malki. "If Netanyahu has any evidence, he has to put it on the table."