Salubrius: The Palestine Mandate in a Nutshell – Trust law for Laymen

The San Remo Agreement is the legal basis of the Mandate for Palestine and subsequently, the State of Israel’s sovereignty over the entire area of the Mandate. It incorporated the 1917 Balfour Declaration and the Covenant of the League of Nation's Article 22

This agreement was adopted on April 25, 1920 by the post-World War I powers, namely Britain, France, Italy, Japan, and is irrevocable under international law. Britain was entrusted with the Mandate until such time as the Jewish population in the territory of the Mandate became a majority.

The 1920 San Remo agreement of the Allied Principal War Powers contained the British Balfour Declaration of Policy word-for-word.  The 1922 Palestine Mandate approved by 51 countries that were members of the League of Nations, and also by the United States, filled in the details needed to apply the Balfour Policy. 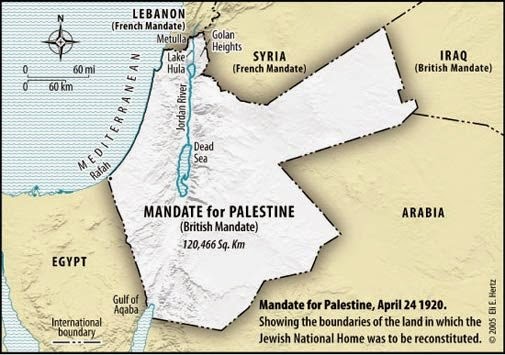 1. At San Remo, the settlor of the trust was the Supreme Council of the Allied Principal War Powers in WWI.  They defeated Germany who commenced the war and the Ottoman Empire who joined Germany in making war on the Allies. Under customary International Law, the victors in a defensive war may negotiate with the vanquished to establish new boundaries for it and keep all the territory outside the new boundary.  In this way the Ottoman Empire was reduced to Turkey.  The remaining Turkish territory in Europe was allocated by the Supreme Council at the 1919 Paris Peace Talks.  Claims for territory in the Middle East – Syria, Mesopotamia and Palestine -- were resolved at the reconvening of the group at San Remo, the following year.  At the Paris Peace talks the Allies set up the League of Nations including Article 22 of its Covenant that provided for “mandates”.  These were combination trusts and guardianships for countries that had been colonies of Turkey for 400 years.  The Mandatory was to provide stability and tutelage for their political development to become independent representative governments over time.

2.  The cestui que trust is the beneficiary.  The beneficiary has no right to go to a "law court" to protect his rights.  That is only the right of the trustee. He has legal dominion over the trust res.  For a tangible piece of property, such as a Ming dynasty bowl, only the trustee has the right of possession. If it is stolen, only the trustee can go into a court of law to reclaim it.  The beneficiary is limited to protecting his rights against abuse by the trustee.  He is entitled to go into a court of equity.  The beneficiary here was the Jewish People or World Jewry.  It was the Jewish people and the Arab people who had submitted competing claims for collective political rights to Palestine at the Paris Peace talks. Woodrow Wilson's Commission of Inquiry in searching for those throughout the world having the right of self-determination had said of the Jews that  Palestine was "the cradle and home of their vital race" and noted that the Jews were the only people that had no other land.

An express term of the trust made the World Zionist Association the formal advisor to the mandate government.  Another term required the trustee to facilitate only Jewish immigration so the Jews could become a majority.

3.  The mandate was based on English law concepts of trusts and guardianships.  Britain volunteered to be trustee or “mandatory” and was selected.

4. The thing placed in trust, the “trust res”, was an intangible, the collective right of a group to establish a government and provide for its administration. This is referred to as "group political rights”.  An individual political right, sometimes referred to as included in "civil rights", is the right to one vote for each citizen.

5.  The purpose of the trust was, in the case of most of the mandates, providing a stable government until such time as the majority of the people in the territory of the state developed politically and could represent themselves - there having been no opportunity in the last 400 years for the inhabitants of the former Turkish colonies to do that. It was also, in the case of the Palestine Mandate, to avoid an antidemocratic Jewish government.  At the time the Jews were in the minority in the entire territory of Palestine and if they had legal dominion over the political rights, an antidemocratic government would be in power.  One purpose of the Palestine Mandate was to delay representative self-government until the Jews were in the majority within the area to be ruled.

6.  The term of the trust -- it was to end when the Jewish population in the area to be ruled was in the majority and the Jews had the capability, just as any European Government to exercise sovereignty.  That would avoid an antidemocratic government such as later was founded in Syria by the French, of a minority of Alawites that under Hafez Assad and Bashir Assad has caused so much misery and destruction.

In 1948 the Jewish population within the Armistice Line in Palestine became the majority. The trust res partially vested.  In 1967 it became completely vested.  Coincidentally, 1948 was also the year the UN Partition Resolution 181 was enacted and when Israel proclaimed its independence.  That is why many people believe that Resolution 181 is the root of Israel’s sovereignty.  But the Arabs rejected this Resolution. By law it was only a recommendation that must be approved by all involved before becoming international law.  It died at birth when rejected by the Arabs.

In 1964 the PLO charter was drafted in Moscow.  This was the origin of the “Palestinian Arab People”.  In the ‘60s also the Soviet Diplomats at the UN promoted two International Conventions dignifying the right of any “people” to have the right of political self-determination not just under natural law, but also under international law.  These became effective in 1976.  But the drafters at the UN made sure that these rights under international law were subordinate to the right of a preexisting state to territorial integrity because since the new world order was established after the Peace of Westphalia, national boundaries of sovereign states have been inviolable.

So ends the Palestine Mandate in a Nutshell.  For the unshelled version see SSRN.com/abstract=2385304


Wallace E. Brand (Salubrius), JD is a graduate of Harvard and UCLA