Outspoken poet angers Arab countrymen by provocatively quipping that Arabs 'are more Zionist than the Jews.' 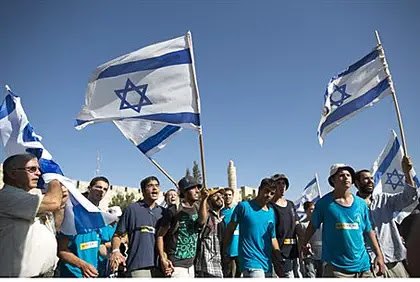 'Palestine' belongs to the Jews
Flash90
An outspoken Moroccan poet has angered many of her countrymen by accusing the Arab world of imperialism and defending the Jewish people's right to a homeland in Israel.

In an interview with Med Radio last week Malika Mezzane, who is an ethnic Amazigh (or Berber), challenged the official line in the Arab world, where tiny Israel is accused of being "expansionist" and where Zionism - the movement for Jewish self-determination - is bizarrely equated with imperialism.

Asserting that it was in fact the Arab world which had pursued expansionist policies, Mezzane quipped that according to their own definition of the term, "Arabs are more Zionists than the Jews."

The Arab world, she said, believed that it was "God’s chosen people, and they have the right to extend their territory, at the expense of other nations."

Mezzane's own people, the Amazigh, are one of the indigenous non-Arab nations of northern Africa which who were conquered and subjugated by the invading Arab armies during the Muslim conquest in the seventh century.

Since then they have been subjected to persecution and periodic campaigns of cultural and physical ethnic-cleansing at the hands of Arab rulers in the region. In some cases, Amazigh calls for self-determination have been rejected by Arab states as somehow representative of "western imperialism" - a perverse inversion of the reality similarly employed by anti-Zionists against the Jewish state.

Further infuriating her listeners, Mezzane insisted that the Jews were justified in establishing "their state in Palestine, since it’s their homeland."

"We have never heard that Alaska or Australia was the homeland of the Jewish people. It’s the Arab people who exceeded their borders in order to establish the so-called Islamic Arab World, at the expense of the Jewish nation," said Malika Mezzane.

The poet's comments were decried as "provocative", with many Arab Moroccans taking to Facebook to denounce her views. She has previously caused controversy by voicing staunch support for the Kurds, another indigenous non-Arab nation fighting for its rights in the Middle East in the face of hostility and concerted attacks by its Arab neighbors.

Since the so-called "Arab Spring" revolutions which weakened the existing Arab regimes in north Africa, Amazigh activists have been more vocal in their demands for equal rights. Another Berber activist, author Boualem Sansal, provoked anger in his home country Algeria after visiting Israel to attend the Jerusalem Writers' Festival.