Those committed to overcoming the global threat of Islamic fundamentalism and preserving the well-being of the Jewish state should pray that Netanyahu succeeds in his efforts. 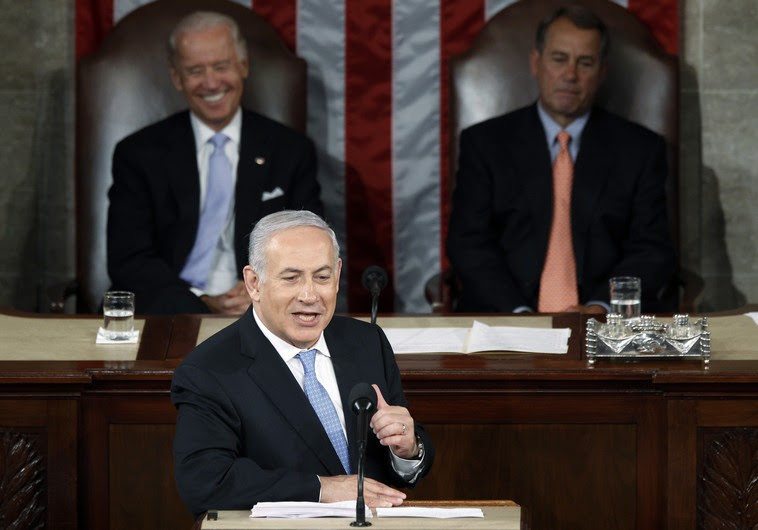 While US President Barack Obama determinedly pursues his policy of appeasement, which may enable the world’s most dangerous terrorist state to become a nuclear threshold power, there are Israelis and American Jews who have initiated a campaign against Prime Minister Benjamin Netanyahu. The campaign calling for the maintenance of bipartisanship toward Israel is in reality undermining the hitherto strong bipartisan congressional opposition to the catastrophic US policy toward Iran.

Israeli opposition groups and the anti-Netanyahu media are now concentrating their efforts on discrediting Netanyahu and calling on the prime minister to cancel his address to the joint session of Congress scheduled for March 3.

Disregarding the gravity of the negotiations with Iran – the underlying reason for the invitation – they accuse Netanyahu of destroying the US-Israeli relationship by failing to obtain Obama’s advance approval to address Congress (which would never have been forthcoming). The White House even falsely alleged that Netanyahu accepted the invitation before they were aware of it.

Labor leader Isaac Herzog, in an irresponsible breach of propriety while attending a conference on security in Munich, Germany, slandered the prime minister, calling on Netanyahu “to act as a patriot ...cancel his speech ... which was born in sin ... and not throw Israel’s security under the bus of the elections.”

The timing of his comments was even more shameful as on that same day and in the same city, US Secretary of State John Kerry was meeting Iranian Foreign Minister Mohammed Zarif.

Similar sentiments were echoed by other political leaders, whose primitive electioneering tactics display utter indifference to and contempt for the repercussions on the greatest threat facing Israel. They warn that Israel would suffer serious consequences if Netanyahu persists in addressing Congress and demand that he postpone his address until after the elections – when the “negotiations” would be over.

They also accuse him of forcing Democrats to choose between supporting their president or undermining his policies, and thus destroying bipartisanship.

That surely sends the wrong message to Congress about limiting Obama’s actions. Worse still, it sends bad vibes to American Jews, reinforcing their inability to stand up and protest against Obama’s hostile policies. The White House, of course, uses this to discredit Netanyahu on the grounds that he is merely engaged in an electoral stunt.

Truth be told, a failure by Netanyahu in this area could cost him the election. But Iran has genuinely been Netanyahu’s greatest concern, and without his intervention would already be a nuclear state.

Israel remains the target for annihilation of the Holocaust-denying Iranians, who brazenly repeat their determination to eradicate the “cancerous” Israel from the map. Yet Israel is marginalized by the P5+1 nations determining the outcome.

Netanyahu regarded the invitation not only as a means to promote his case to Congress but as a platform to convey his message to the entire world. But this is ignored by his Israeli political opponents, who are more concerned with electoral populism than displaying a united front in the face of an existential threat.

Yet Obama is on extremely shaky ground. Even the normally supportive Washington Post published an editorial warning him against presenting the world with a fait accompli over Iran’s nuclear goals and granting them regional hegemony. It accused Obama of seeking “to avoid congressional review because he suspects a bipartisan majority would oppose the deal he is prepared to make.”

It is in fact Obama, not Netanyahu, who has made this a partisan issue, because of his fear that an effective presentation by Netanyahu at Congress could have a major impact on legislators and the public. It is this, rather than pre-election protocol, that explains the frenzied efforts and threats that the White House has engaged to discredit Netanyahu.

Netanyahu’s efforts are also being undermined by extreme left-wing groups like J Street calling on congressmen to boycott his speech and launching petitions proclaiming that he does not represent the views of American Jews.

This is buttressed by media “court Jews” like New York Times columnist Tom Friedman resurrecting the traditional anti-Semitic dual loyalties accusation, warning Jews that if they protested against Obama’s policies on Iran, Americans would be convinced that Israel controlled Washington, was responsible for the war in Iraq and was now dragging the US into another war.

American Jews claim that they live in a unique democratic country and enjoy full equality. Yet, whereas most Americans have no hesitation in criticizing their president when they disagree with his policies, the traditionally feisty and outspoken American Jewish leaders seem fearful to criticize their president even in the most respectful terms. This, even after Obama’s repeated and crudely appalling behavior aimed at humiliating his ally, the Israeli prime minister, in direct contrast to his servility to representatives of rogue states including Iran.

On this issue, most of the Jewish leadership establishment has remained silent. This includes the American Israel Public Affairs Committee, whose officials, according to the White House, privately distanced themselves from Netanyahu’s visit.

To his credit, Malcolm Hoenlein, the executive vice chairman of the Conference of Presidents of Major American Jewish Organizations, was one of the few mainstream leaders stressing that Netanyahu’s intention was neither to personally attack the president nor become engaged in US domestic politics. Rather, it was to promote Israel’s concerns about developments that it considers an existential threat and great danger to the world.

But shockingly, a number of Jewish leaders also publicly slammed Netanyahu. Abe Foxman, national director of the Anti-Defamation League, went so far as to describe the issue as a “circus” and called on House Speaker John Boehner “to withdraw” the invitation and Netanyahu to rescind his acceptance.

He was followed by Rabbi Rick Jacobs of the Reform movement, who said Netanyahu’s speech was “a bad idea” and urged him “to bite the bullet and postpone his address” or he would “turn Israel into a partisan issue.”

This was outrageous. Who gave Foxman and Jacobs a mandate to challenge the decision of Israel’s prime minister to appeal against enabling the Iranian terrorist state from becoming a nuclear state – an act of appeasement that would dwarf Chamberlain’s concessions to Hitler in Munich? Foxman’s subsequent effort to modify his outburst by condemning J Street’s “inflammatory and repugnant campaign” against Netanyahu did not detract from the damage he caused.

Jacobs and Foxman may have convinced themselves that by seeking to avoid a conflict with their president, they were acting on the side of the angels. It was left to the hawkish Zionist Organization of America to bitterly condemn their intervention and make chilling parallels between their behavior and that of Rabbi Stephen Wise who in 1944 urged Jewish leaders to cease campaigning to pressure the White House to intervene on behalf of the Jews in Europe in order not to embarrass president Franklin D. Roosevelt.

Today, Netanyahu is desperately appealing to the world to prevent an evil, apocalyptic Islamic terrorist state, committed to Israel’s destruction, from becoming a nuclear power. Yet Foxman and Jacobs seem more concerned about placating their president. In making such negative statements, it is they who are transforming this into a partisan issue – and providing enormous satisfaction to Iranian mullahs, who undoubtedly appreciate their efforts. Shame on them.

Not surprisingly, the White House exploited these outbursts as a means of encouraging Democrats to boycott the address. The president even shed crocodile tears bemoaning that Israel would become a partisan issue. Conveniently, Vice President Joe Biden announced that he would be out of the country and unable to attend. Yet very few Democrats have indicated that they would absent themselves.

Indeed, while unhappy with the timing, House Democratic leader Nancy Pelosi said she would attend and dismissed calls for a boycott. Rep. Eliot Engel, the senior Democrat on the House Foreign Affairs Committee, also made it clear that he intended to hear what Netanyahu had to say.

There is in fact a growing awareness that Obama’s proposed deal represents a sellout to the Iranians.

What were hitherto considered wild accusations that Obama was abandoning the traditional allies of the US in order to enter into an alliance with the Iranians has now become a genuine concern.

Netanyahu’s speech from a US Congress platform will undoubtedly enjoy massive media exposure and may bring about public pressure on the P5+1 countries to refrain from committing an act that would have horrific implications not only for Israel but the entire world. Those committed to overcoming the global threat of Islamic fundamentalism and preserving the well-being of the Jewish state should pray that Netanyahu succeeds in his efforts.

The writer’s website can be viewed at www.wordfromjerusalem.com. He may be contacted at ileibler@ leibler.com.

I totally agree with you. AIpac has become lately the rubber stamp of this administration!!!
Only ZOA has still a genuine and forceful voice that expressses real concerns and shows the real risks that this POTUS is willing to take for pleasing the most extreme part of his electorate.
Netanyahu is right to proceed and not cave in to the pressure of an antisemitic media and political class worldwide.