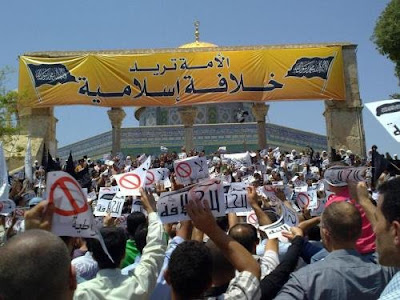 “The people want an Islamic Caliphate,” “Yes to the Caliphate,”
“No to democracy” are the signs at this 2011 rally at the
Dome of the Rock. View video. (YouTube)
https://www.youtube.com/watch?v=WEHUm62KuPo

The notion of a “conflict over Jerusalem” immediately brings an association with the Arab-Israeli conflict over the Holy City. Surprisingly, however, amid the systematic destruction of mosques and holy places in the Arab world, it is precisely Israel’s responsibility for security at the mosque compound on the Temple Mount that protects the mosques there from a similar fate.

To understand the nature of the danger to the Al-Aqsa Mosque, one needs to understand the disputes within the world of Islam over the mosque and over the importance of Jerusalem in general.

Islam is divided into the Shia and the Sunna, but the Sunna is also divided into two main groups: the Salafis and the Muslim Brotherhood. There are other groups as well, such as the Sufis, but that does not concern us in this discussion.

The controversy between the Salafis – from whom Al-Qaeda emerged and who are also known as Wahabis – and the Muslim Brotherhood is about, among other things, what constitutes the center of Islam. Whereas the Salafis view the Arabian sites of Hijaz and Mecca as the center of the faith, the Muslim Brotherhood locates it at the Cairo Al-Azhar University, founded in the year 970 as a center for Islamic studies from which rulings and edicts on Islam and Islamic culture emerge. But because Cairo has no special religious holiness, the Brotherhood regards Jerusalem as their religious center.

Thus, from the Salafis’ standpoint, the Muslim Brotherhood’s enhancement of the special status of Jerusalem poses a danger to the status of Mecca.

The conflict is not only theoretical and theological but concerns positions of power. In Syria, for example, the Salafi Islamic State is engaged in an outright war with the Nusra Front of the Muslim Brotherhood.

[Editor’s note: The author exposes Al Nusra’s affiliation with the Muslim Brotherhood and Hamas. Until now, reports suggested Al Nusra was an offshoot of Al-Qaeda.]

The theological debate, of course, is undergirded by the political-military struggle between the Salafis and the Muslim Brotherhood. One source of the theological disagreements between the two sides is the attitude toward holy places. Whereas the Salafis frown upon the cult of holy places other than Mecca and Medina and destroy such sites systematically – and not only antiquities and shrines of Christianity but Muslim shrines as well – the Muslim Brotherhood accepts the icons of holy places. 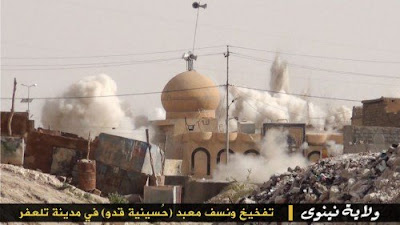 Destruction of a mosque in Mosul by ISIS (Iraqi News)

This religious controversy also involves Jerusalem. “Liberating Al-Aqsa” or “Al-Aqsa is in danger” are main motifs of the Muslim Brotherhood’s preaching throughout the region. Salafis, however, downplay the issue of Jerusalem and Al-Aqsa to the point of omitting it altogether. And whereas the Muslim Brotherhood focuses on Jerusalem and Al-Aqsa, the Salafis focus on a more immediate goal: “conquering Rome” – that is, the Christian world.

Although the Salafis do not state explicitly that they reject the status of Jerusalem in Islam, it can be inferred from where they place their emphases. For example, it appears that there is a Salafi cleric in the Al-Aqsa mosque compound, and he has a website called The Blessed Al-Aqsa Mosque. At the site, however, the reference to Al-Aqsa is geographic – the marking of a place. There is no reference to its holiness, only to various religious matters with no discussion of Jerusalem or Al-Aqsa at all.1

On one of the Facebook pages that reveal Salafi followers’ attitudes,2 a follower called Abdullah wrote: “One must ask why the Prophet first conquered Mecca and [many other places] before he turned to Jerusalem? Why didn’t the first caliph, Abu Bakr, conquer it? And why did Omar conquer it only after many other conquests? And also, why did Saladin conquer it only after he had defeated the Fatimids in Egypt and spread the Sunni school in Egypt and at Al-Azhar?”

For him, Jerusalem was at the bottom of agenda for the Prophet and his successors, and Mecca was at the top.

Against this backdrop, the proclamation that the Islamic State disseminated in Jerusalem during the most recent Ramadan should come as no surprise: it did not refer to Al-Aqsa or Jerusalem, but only warned Christians to leave the Muslims’ neighborhoods.3

A surprising assertion from the Sunni direction came from Cairo. In answering the question of a Salafi teacher from Saudi Arabia, Adnan Rajahi, about the status of Jerusalem in Islam, a religious scholar named Mustafa Rashad stated4 that the Al-Aqsa Mosque was originally called the Ayliya Mosque. Only at the time of the Umayyad Caliph Marwan Bin al-Hakam, he explained, was its name changed to Al-Aqsa and attributed to a Koran verse about the Prophet Muhammad’s ascent into the heavens – and this for purely political reasons of redirecting the pilgrimage from Mecca to Jerusalem, since Mecca was then ruled by the Damascus-based enemies of the Umayyads. A real Al-Aqsa Mosque, the Egyptian scholar told the Salafi questioner from Saudi Arabia, exists in Saudi Arabia.

The Salafis and Al-Qaeda, then, are likely to see the Muslim Brotherhood’s great emphasis on the Al-Aqsa issue as a danger and to use it as one of the pretexts for destroying mosques in Iraq and Syria.

A direct danger to the status and wellbeing of Mecca comes from a surprising direction – that of the Assad regime in Damascus. The danger involves bolstering Jerusalem’s status in Islam as the kibla – the new-old direction of Muslim prayer. In one of the emails exposed and published in The Guardian,5 an adviser to President Assad, Hadil el-Ali, suggested that in one of his major speeches Assad should express support for the Palestinians and propose changing the direction of prayer to Jerusalem. Although ultimately that was not included in the speech, it indicates the mood in Damascus at the time. Instead of calling to change the direction of prayer to Jerusalem, Assad convened a large Sunni conference in Damascus under the watchword “Saving Al-Aqsa.”6

Fayaz Shuker, an Assad supporter and leader of the Lebanese Baath Party, went so far as to threaten the destruction of the Kaaba holy site in Saudi Arabia, saying it was nothing but “[a heap of] stones.”7

One of the Palestinian Authority’s difficult problems with Saudi Arabia is the PA’s support for Assad’s regime.8

A senior Palestinian official in Ramallah confirmed to this author9 that one of the main reasons the Palestinian Authority so demonstratively organizes pilgrimage processions to Mecca is to signal to the Saudis that the PA’s relations with Assad do not come at the expense of Mecca’s status compared to Jerusalem’s, despite the importance of Jerusalem in the Palestinian context.

One reason for the Muslim Brotherhood’s pronounced emphasis on the Al-Aqsa issue is political. They want to unify all the Arab revolutions in all the separate Arab countries into one great revolution under the flag of saving Al-Aqsa that they brandish. Saudi Arabia and the Gulf states, for their part, regard this as a political danger and hence do not support the Palestinians’ struggle to entrench their status in Jerusalem; they see the emphasis on Jerusalem as working against them. The Palestinians’ complaint that the Arab League (under the influence of Saudi Arabia and the Gulf states) is not implementing an old decision of an Arab summit in Sarat, Libya, to allocate half a billion dollars to Jerusalem has become an ongoing Palestinian grievance.10 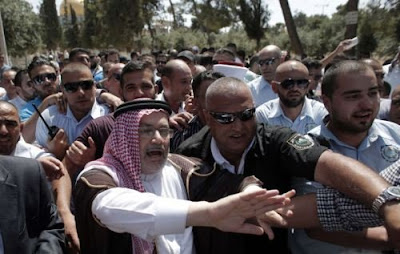 In seeking to maintain its status in Jerusalem, the Palestinian Authority came up with the idea of “religious tourism” to the city. The aim is to flood it with Muslim tourists, who would strengthen its Muslim character and thereby counteract the “Judaization” trend in the city.

The Muslim Brotherhood harshly condemned this initiative, calling it “normalization.” In their view, an inundation of tourists in the city sharply contradicts the slogans about battle and warfare to liberate Al-Aqsa, with which they hope to unite the whole world of Islam under their flag.11

In actuality, the Palestinian Authority is the weakest force in the Al-Aqsa plaza. In visiting the site recently, the PA minister of religious affairs was almost lynched.

The Palestinian Authority’s ambition to declare east Jerusalem the capital of Palestine represents a minority position. Other forces, which are stronger than the PA, reject this political designation for Jerusalem and instead see Al-Aqsa as the place where the worldwide Islamic caliphate will be proclaimed in the future.

The dominant force in the mosque compound is Hizb ut-Tahrir (the Islamic Liberation Party). Deployed worldwide, Hizb ut-Tahrir has adopted the exclusive goal of promoting the idea of the Islamic caliphate and does not hide its intention to proclaim the caliphate from Al-Aqsa. Thus, the movement clashes with the PLO on the one hand, as in the ousting of the senior Palestinian official, and with Hamas on the other, but first and foremost with Jordan.

For Jordan, maintaining its designation as “Guardian of the Holy Places” in Jerusalem is a matter of the highest strategic importance, since this role embodies the prestige of the Hashemite dynasty. Jordan believes it will retain this role after an Israeli-Palestinian peace agreement is concluded.12

Caption: View attempted attack on the Jordanian Minister of Waqf, Sheikh Dr. Dahod Haeal and the Chief Justice of Jordan, Sheikh Ahmed Halil, during their visit to the Al Aqsa Mosque, particularly after the 7:20 point. (YouTube)14

In May this year, Hizb ut-Tahrir humiliatingly expelled two senior religious figures who had come from Jordan to lead the prayers at Al-Aqsa.15 This sparked a crisis between the Palestinian Authority and Jordan;16 the reason, according to a senior Jordanian official, was that Jordan identified PA-affiliated Fatah members among the expellers.17

Pinhas Inbari is a veteran Arab affairs correspondent who formerly reported for Israel Radio and Al Hamishmar newspaper, and currently serves as an analyst for the Jerusalem Center for Public Affairs.