Alongside statements by PA President Mahmoud 'Abbas expressing a desire to avoid escalation and continue the security coordination with Israel, the Palestinian media has been publishing statements by PA officials, especially Fatah officials, as well as op-eds, that advocate continuing the violence.


Fatah seems to be speaking in two voices regarding the violent events of the last few days, which have been described variously as "an intifada," a "popular awakening," the "Al-Aqsa Rage" events, etc. Alongside statements by PA President Mahmoud 'Abbas expressing a desire to avoid escalation and continue the security coordination with Israel, the Palestinian media has been publishing statements by PA officials, especially Fatah officials, as well as op-eds, that advocate continuing the violence. Some described the stabbings as acts of self-defense and others called to maintain a high level of tension and conflict. In some cases, PA spokesmen even chose to deny that violent attacks have taken place, claiming that Israel was falsely accusing Palestinians of terrorism in order to justify their killing. For example, commenting on the attempted car bomb attack at the Al-Za'im checkpoint on October 11, Palestinian Authority (PA) security services spokesman 'Adnan Al-Damiri said that the vehicle had caught fire due to an electric malfunction. The PA daily Al-Ayyam claimed that "Israel concocted a false and deceptive story about an alleged [attempted] bombing, as it has done on numerous occasions in the past."[1] Following the death of Mustafa Al-Khatib, who was killed on October 12 as he attempted to knife a soldier in Jerusalem, the PA daily Al-Hayat Al-Jadida stated that "the occupation forces usually accuse Palestinians of attempted knifings in order to justify shooting at them and killing them."[2]

Additionally, a delegation of Fatah officials, including figures close to Palestinian President Mahmoud 'Abbas, paid a condolence visit to the family of a terrorist who was killed after he murdered two Israelis in Jerusalem's Old City. An investigative article in the PA daily Al-Hayat Al-Jadida reviewed reactions by Palestinians on social media who expressed joy at the killing of Jews.

The following are excerpts from statements and articles reflecting this dual stance adopted by Fatah.

Fatah Official: "We Are Defending Ourselves... Some Of Us Use Stones And Others Knives"


Fatah Central Committee member Abbas Zaki told the Turkish news agency Anadolu: "Armed struggle against the occupation is a legitimate right that we will not relinquish, but this [activity] requires unity among all the Palestinian factions and establishing a central war room and formulating plans so that the armed struggle exacts a steep price from the enemy while [also] benefiting the Palestinian people. We reserve the right to [engage in] armed struggle, which is an option we will not give up, but we must consider how and when to carry it out, and whether the climate is right to use it to our benefit. At present we support [waging] a popular intifada that will confound the enemy and paralyze his security and economy, and prompt the world to address the question of how to end the world's last remaining occupation.

"Deciding on an armed struggle now will [only] serve the enemy, who has the military power to kill [us] on a daily basis. Today we are defending ourselves, and we will continue to do so. We do not want escalation, but the enemy is attacking and destroying our cities and villages. [The means] of self-defense differ from one Palestinian to the other, some of us use stones and others knives. [But] there is no atmosphere of a new intifada, because there is no Palestinian unity. We are now preparing to organize [the forces] on the ground. At present, the young people are acting without planning, motivated [only] by their conscience and the oppression they live under."[3]

Muhammad Dahlan, a Palestinian Legislative Council member from Fatah, who is a rival of Palestinian President Mahmoud 'Abbas, wrote on his Facebook page: "Resistance to the occupation is a national and moral obligation and a right sanctified and guaranteed by human and divine laws. The current national activity is a severe blow to everyone who banned resistance to Israeli occupation or termed it a crime. The activity [as a whole] and the individual actions constitute...a firm message to the occupier and the international community that the forms of resistance have changed and that, though the waves [of resistance] may wax and wane, [the resistance itself] will never die or cease as long as an occupation exists... There is an urgent need to take measures and make decisions on two levels. [First,] there is the pressing and immediate level, which is mainly declaring a clear preference for national action and meeting all the needs in order to continue it and defend it... At the same time, [we must] call for serious national meetings with a clear and defined agenda instead of exchanging blows in the media and political arena...[4]

A delegation of Fatah officials paid a condolence visit to the family of Muhannad Al-Halabi, who stabbed two Jews to death on October 4, 2015. The delegation included Fatah Central Committee members 'Azzam Al-Ahmad, a senior PA official close to PA President 'Abbas, as well as Nabil Sha'ath, Mahmoud Al-'Aloul and Jamal Al-Muhsin; Fatah spokesman Ahmad 'Assaf; Fatah's secretary in Ramallah Muwaffaq Sahwil; assistance commissioner of recruitment 'Abd Al-Mun'im Wahdan; Hassan Faraj, secretary-general of Fatah's Shabiba youth movement; Mustafa 'Abd Al-Hadi, member of Fatah's leadership in Ramallah and Al-Bira, and others. During the visit, 'Azzam Al-Ahmad said on behalf of the Fatah: "The Palestinian people will continue to defend itself against aggression and it is very determined to struggle, no matter what the cost, until the occupation ends."[5]

The Palestinian Bar Association, whose heads are Fatah members and which receives funds from the E.U., announced it would award an honorary law degree to "the martyred hero Muhannad Al-Halabi," who had been studying law.[6] The association also decided to hold its next conference in honor of Al-Halabi. 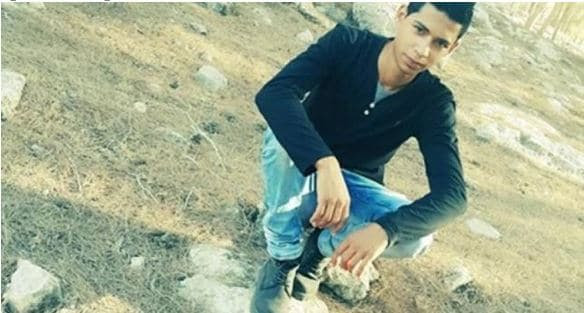 In an October 8 post, the Facebook page of the "Fatah Movement Information and Ideological Recruitment Commission" advocated the use of syringes filled with sulphuric acid or some other poisonous substance. It said: "Please circulate this post so it will reach the residents of Jerusalem, since this is a more efficient and lethal [method] than using a knife. Considering that metal detectors have been installed at the entrances to occupied Jerusalem in order to prevent the use of knives in stabbing operations, [note that] there is a newer and simpler method: using syringes filled with sulphuric acid for example, or else gas or any other poisonous substance."[7] 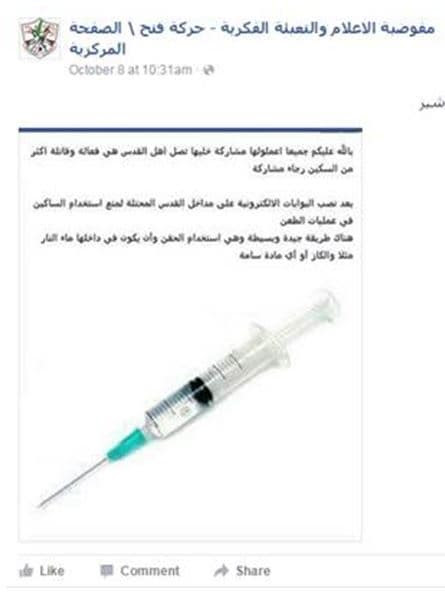 The same day, this Facebook page also posted an obituary notice for Amjad Hatem Mahmoud Al-Jundi, who carried out the October 7, 2015 stabbing attack in the city of Kiryat Gat. The notice, issued by the Fatah movement in Yatta and its environs that includes pictures of 'Abbas and Yasser 'Arafat as well as the official Fatah logo, reads:"The National Palestinian Liberation Movement Fatah in Yatta and its environs, including all its districts and organizational branches, as well as the movement offices and the office of the student youth movement, all proudly congratulate the heroic martyr Amjad Hatem Mahmoud Al-Jundi (Al-Hushiya), who on October 7, 2015 executed a heroic stabbing operation within the Palestinian territories of [19]48 in defense of the Al-Aqsa mosque. Glory and eternal life to our loyal martyrs."[8] Another Fatah-affiliated Facebook page, called "Fatah – Al-'Asifa Forces," posted an obituary of "the heroic martyr of Jerusalem, Fadi 'Aloun," who committed an attack on security forces on Jerusalem's Haneviim Street. Like the obituary notice for Al-Jundi, this notice too bore the portraits of Yasser 'Arafat and Mahmoud 'Abbas, and the Fatah symbol.[9] 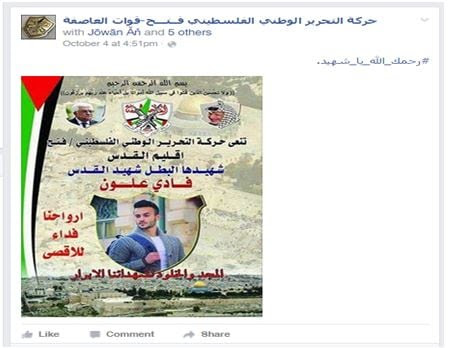 Activists On Social Media Rejoice: "25 Bullets Killed The Zionist Woman Who Cursed The Messenger Of Allah"

The PA daily Al-Hayat Al-Jadida published an investigative report by Amal Dweikat titled "Facebook Support for Attacking Settlers," which stated that Palestinian activists on Facebook and Twitter had responded with joy to the attack on two settlers near Itamar, which they termed "heroic", and especially to the photos of the man and woman who were killed.[10] The article mentions that one these activists invited readers to watch a video titled "25 Bullets Killed the Zionist Woman Who Cursed the Prophet Muhammad in Al-Aqsa Mosque." The activists also associated the attack with the burning of the Dawabshe family. Some of the activists posted inciting songs encouraging the escalation of violence, such as "No Force in the World Will Take Away My Weapon."[11] 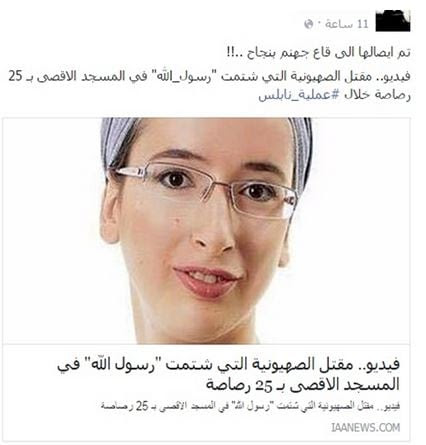 Post on social media: "Video: 25 bullets killed the Zionist woman who had cursed the Prophet Muhammad in Al-Aqsa mosque"

Columnists in PA dailies praised the "awakening" events and some called to continue them and to maintain the state of unrest. Yahya Rabbah, the PLO's former ambassador to Yemen and a columnist for Al-Hayat Al-Jadida, wrote: "Thank you, O Palestinian people, yours is the glory and the victory. The comprehensive popular awakening has spread from the northernmost point in the West Bank to its southernmost point, reaching Jerusalem and Al-Aqsa. It has also dawned in Gaza and inside the Green Line, as well as in the Palestinian diaspora, both near and far. With this ongoing awakening, the great Palestinian people has managed to deliver a new blow to the settlements."[12]

Akram 'Atallah, a columnist for the PA daily Al-Ayyam, wrote: "It is necessary to maintain a certain level of conflict, without reaching a [state of] war with rivers of blood but [also] without reverting to a state of calm...It is necessary to continue the conflict at a certain tension [level], as dictated by political considerations.[13]

Another Al-Ayyam columnist, Rima Nazzal, wrote: "We must allow events to continue, develop and build up [while] rallying the masses around them and providing the conditions for their continuation. This will be guaranteed if [we] announce the failure of the negotiations and the collapse of the Oslo [Accords] and if a new struggle strategy is formulated, based upon action and providing all sectors the chance to participate and persevere in the popular resistance strategy without giving it names or laying down its frameworks [in advance]."[14]