Kuwaiti Author Ibtihal Al-Khatib: ISIS Emerged From Our Heritage Books; If We Do Not Reform Our Discourse We Will Become Extinct - MEMRI


In a November 20 interview with Sky News Arabia, Kuwaiti academic and journalist Prof. Ibtihal Al-Khatib called for an urgent reexamination of the school curricula. Pointing out that ISIS emerged "from our schools, from our ideology, and from our books of heritage," she said: "Either we reform our [religious] discourse and join modern life, or we will become extinct." Al-Khatib, who is a professor of English language and literature at Kuwait University, further suggested "removing the Islamic education curricula completely, and perhaps replacing them with curricula about the history of religions."

Ibtihal Al-Khatib: "We have gotten used to a victim mentality, and have somehow learned to enjoy it. We always feel that we are victims, the ones being attacked, the ones that the world conspires against. Therefore, when others suffer disasters or catastrophes, we tend to express naïve and childish vindictiveness. We saw this in the case of the Russian plane that went down in the Sinai, and we saw it again in what happened in France. We do this rather than see things realistically."

Host: "Some say that justifying terrorism is tantamount to terrorism. Do you agree?"

Ibtihal Al-Khatib: "Absolutely. Any attempt to justify or to legitimize terrorism is a terrorist idea, and is just as dangerous as the terrorist act itself, because the idea and the act are equally dangerous.
[...] 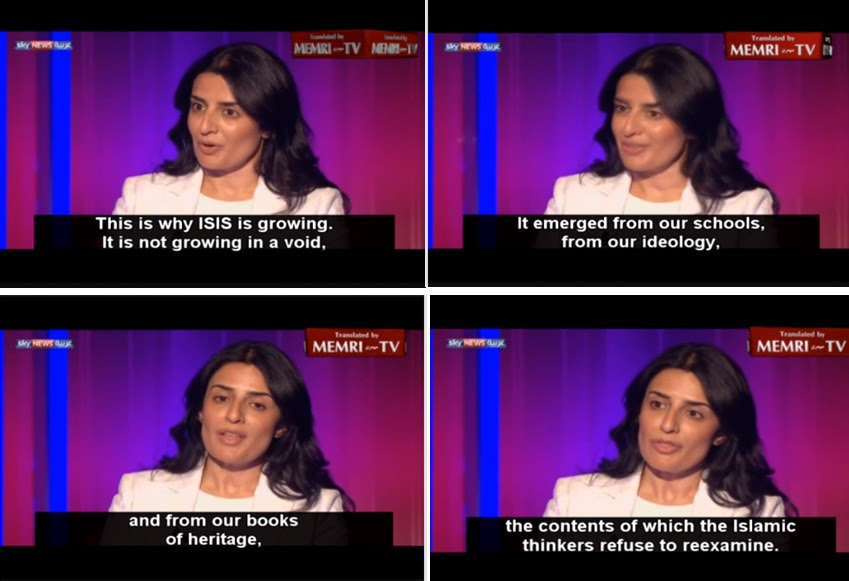 "I believe that there is a clear sentiment critical of ISIS, but by the same token, there is a strong pro-ISIS sentiment, and there is sympathy toward the Islamic State. This is why ISIS is growing. It is not growing in a void, and it did not emerge in a void to begin with. It emerged from schools, from our ideology, and from our books or heritage, the contents of which the Islamic thinkers refuse to reexamine.
[...]

"If you do not reform yourself, the world will not wait for you. We are facing two options. Either we reform our (religious) discourse and join modern life, or else we will become extinct. I really believe that stagnant nations, which stick to principles that are at odds with the progress of civilization, are bound to come to an end. Such nations will not survive."