By flouting the U.N. resolutions, Iran is clearly testing the will of the United States and its allies to enforce the overall regime limiting its nuclear ambitions. 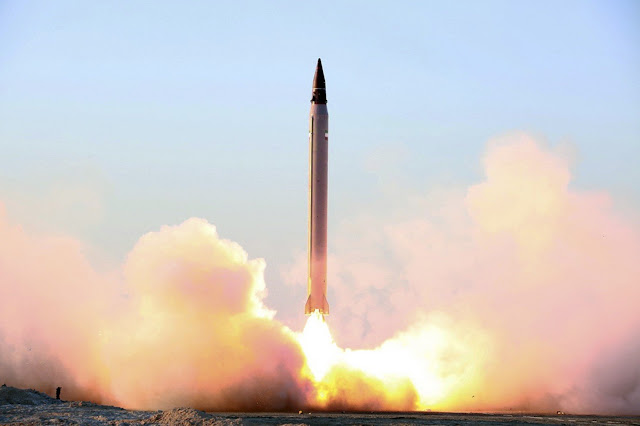 A photo released by the Iranian Defense Ministry on Oct. 11 claims to show the launching of an Emad long-range ballistic surface-to-surface missile in an undisclosed location. Iran tested a ballistic missile again in November, a U.S. official said. (Associated Press)


IRAN IS following through on the nuclear deal it struck with a U.S.-led coalition in an utterly predictable way: It is racing to fulfill those parts of the accord that will allow it to collect $100 billion in frozen funds and end sanctions on its oil exports and banking system, while expanding its belligerent and illegal activities in other areas — and daring the West to respond.

Unfortunately, the Obama administration’s response to these provocations has also been familiar. It is doing its best to downplay them — and thereby encouraging Tehran to press for still-greater advantage.

We’ve pointed out how the regime of Ayatollah Ali Khamenei has unjustly sentenced Post correspondent Jason Rezaian to prison and arrested two businessmen with U.S. citizenship or residence since signing the nuclear accord. There have been no penalties for those outrageous violations of human rights. Now a United Nations panel has determined that Iran test-fired a nuclear-capable missile on Oct. 10 with a range of at least 600 miles, in violation of a U.N. resolution that prohibits such launches. Moreover, it appears likely that a second missile launch occurred on Nov. 21, also in violation of Security Council Resolution 1929.

The U.S. response? “We are now actively considering the appropriate consequences to that launch in October,” State Department official Stephen Mull testified at a Senate committee hearing Thursday. In other words, there have so far been none — other than a speech by the U.S. ambassador to the United Nations blaming the Security Council for the lack of action. As for the second missile launch, the administration claims to be investigating it, though it likely has in its possession the intelligence necessary to make a judgment.

It’s not hard to guess the reasons for this fecklessness. President Obama is reluctant to do anything that might derail the nuclear deal before Iran carries out its commitments, including uninstalling thousands of centrifuges and diluting or removing tons of enriched uranium. The same logic prompted him to tolerate Iran’s malign interventions in Syria, Yemen and elsewhere, along with the arrest of Mr. Rezaian, while the pact was under negotiation.

U.S. officials argue that Iran’s nonnuclear violations make it all the more important that the nuclear deal be implemented. But that ignores the clear connections between the missile launches and Tehran’s ambitions to become a nuclear power. The only practical military purpose of the missiles the regime is testing is to carry atomic warheads. And while missile launches are not prohibited by the nuclear pact itself, the separate resolution banning them remains in effect until the deal is implemented, after which a new resolution takes effect that calls on Iran not to develop such missiles for eight years.

By flouting the U.N. resolutions, Iran is clearly testing the will of the United States and its allies to enforce the overall regime limiting its nuclear ambitions. If there is no serious response, it will press the boundaries in other areas — such as the inspection regime. It will take maximum advantage of Mr. Obama’s fear of undoing a legacy achievement, unless and until its bluff is called. That’s why the administration would be wise to take firm action now in response to the missile tests rather than trying to sweep them under the carpet.