--the Kremlin’s attitude toward the Jews changed under Russian President Vladimir Putin, who sees Russian-speaking Jews as a political asset.

On February 24, 2016, the well-known Russian liberal website Gazeta.ru published an article about the Kremlin’s position toward the Russian Jewish community.

It should be mentioned that, although one of Vladimir Lenin's first decisions as the new head of Soviet Russia was to grant Jews freedom of worship, in recognition of the prominent role they played in the 1917 Russian Revolution, all hopes for full emancipation were dashed when Joseph Stalin assumed power, since the Soviet leader suffered from extreme paranoia when it came to the Jews. Some of the most prominent victims of Stalin’s purges were doctors, intellectuals and members of the leadership, such as Soviet politicians Leon Trotsky and Grigory Zinoviev, who were both Jews.
The Soviet Government did all it could to force the disappearance of Jews as a separate national community.

Even after Stalin’s death, the attempt to suppress Judaism and Jewish culture continued. Although the Soviet Union supported the creation of Israel in 1948, it tilted toward the Arab world in the early 1960s and even threatened to attack Israel in both the 1967 Six Day War and the 1973 Yom Kippur War. After the Six Day War, Soviet discrimination against Jews increased further. The authorities viewed Jews as potential enemies, partly because many Jews had relatives in the United States. The Jews indeed fought the Soviet regime for their right to immigrate to Israel, and this fight was carried out by both American Jewry and by Jewish dissidents in Russia.[1]
In the article, Yuri Kanner, President of the Russian Jewish Congress, says that the Soviets used Jewish emigration from Russia to Israel as leverage in their relations with Muslim countries. It describes further how repression of the Jews increased in the 1980s (under Soviet Presidents Leonid Brezhnev, Yuri Andropov, and Konstantin Chernenko), when the Cold War escalated and relations between the USSR and the U.S. deteriorated. The Jews' situation improved under President Mikhail Gorbachev, with the advent of Perestroika.

According to the article, the Kremlin’s attitude toward the Jews changed under Russian President Vladimir Putin, who sees Russian-speaking Jews as a political asset. The article states that the Kremlin uses its ties with religious figures to broaden its sphere of influence. For example, Moscow uses Russians Patriarch Kirill and Russian rabbis as unofficial ambassadors of the Kremlin. The article mentions that Vyacheslav Kantor, president of the European Jewish Congress, is one of Putin’s men.

The following are excerpts from the Gazeta.ru article: [2] 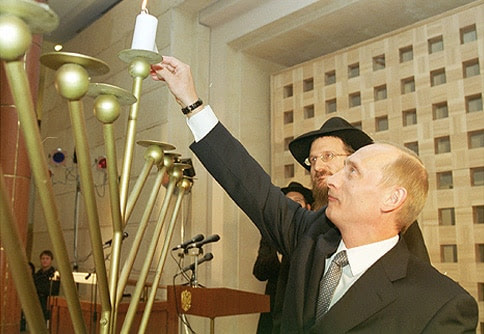 "On February 24, 1971, 24 Soviet Jews entered the office of the Chairman of the Supreme Soviet Presidium and refused to leave until their demands were met. Then-Minister of the Interior Nikolai Shchelokov was informed that the room had been 'taken over.' Later, it emerged that the word 'takeover' was misplaced, since none of the Jews were armed. But they were determined to remain there until they received permission to leave the USSR for Israel.

"The [Jewish] political activists waited all day for a response… and their wait was not in vain. Eventually, the assistant to the Chairman of the Supreme Soviet of the USSR [the highest legislative body in the Soviet Union] told them that the documents necessary for their emigration were being drawn up…This was a real triumph for Soviet Jewry. By that time, relations between the USSR and Israel had been severed, and nobody expected the Kremlin, with its persecution of Zionists and all Jews who were interested in their cultural heritage, to open the borders for Jews who wanted to leave…

"… When the information about the 'takeover' of the office reached the leaders of the Political Bureau of the Communist Party of the Soviet Union (CPSU), an order was given to settle the matter quickly and quietly. According to Kanner, 'the explanation is that in 1971, the Kremlin made it official policy to improve its relations with the U.S., the country that had the largest Jewish community in the world at the time, even [larger] than [the community in] Israel…Besides, Moscow wanted to use Jewish emigration as leverage vis-a-vis its allies among Muslim countries.' Muslim powers were anxiously watching the flow of immigrants into young Israel, which was becoming an increasingly powerful geopolitical rival. In particular, the USSR wanted to extort concessions from Egypt, whose President Anwar Sadat had begun to demonstrate too much independence from Moscow by the start of the 1970s. In 1971, the flow of Soviet Jews to Israel increased from less than a thousand to 11 thousand people. This, however, only served to fuel tensions between the USSR and Egypt...


"…From 1969 to 1976, about 100 thousand Soviet Jews left for Israel. This wave of emigration was followed by a backlash. The 1980s saw a new escalation of the Cold War, the relations between the USSR and the U.S. deteriorated, and Moscow used the 'Jewish factor' [to pressure the U.S.].

"'For the first time, they started arresting teachers of Hebrew, who had been left in peace until then, says Iosif Begun [a human rights activist and author and a former Soviet prisoner of conscience]... Iosif Begun himself, who was one of the most active popularizers of Jewish culture in the USSR in the 1970s, first found himself behind bars in 1977. By that time, he had already lost his position as a research associate because of his 'anti-Soviet activity.' The first charge brought against him was '[leading a] parasitic lifestyle.' More serious accusations of anti-Soviet propaganda and subversive activity followed. Between 1977 and 1980, and 1983 and 1987, Begun was held in prisons and penal colonies. 'Then the perestroika started, and, to my surprise, Gorbachev’s amnesty[3] was announced. That’s how I got out,' he says. Only then did he manage to emigrate to Israel."

"Times have changed, and now the Kremlin sees Russian-speaking Jews as a political 'asset'…The Kremlin’s attitude to Russian Jewry has markedly improved. In 2012, Vladimir Putin became the first Russian leader to don traditional religious Jewish headwear – a kippah – during his visit to the Western Wall in Jerusalem. In the opinion of political analyst [and vice president of the Center for Political Technologies] Aleksey Makarkin, it was only during Putin’s rule that 'the state embarked upon a determined course to eradicate radical antisemitism.' This is due primarily to the fact that the current president is intolerant toward any manifestation of nationalism that 'may blow up the country. 'For this reason, Makarkin claims, 'the Jewish communities see the state as their protection from antisemitism'...

"The Kremlin uses its connections to Russian Jewry in Israel, but does not do it the same way as most other world powers,' says Makarkin...  According to Kanner, the Kremlin prefers to use religious ties rather than NGOs to broaden its sphere of influence. 'For example, during the recent meeting between Russia's Patriarch Kirill and Pope Francis, the former was representing not only the interests of the Russian Orthodox Church, but the interests of the Kremlin as well,' Kanner says. Moscow uses Russian rabbis the same way. But foreign partners do not always realize that.'

"Vyacheslav Kantor, one of the richest businessmen in Russia, and third-time president of the European Jewish Congress (EJC), is considered to be an influential 'pro-Kremlin' figure in the international Jewish community. One of the missions of the EJC is to disseminate information and preserve the memory of the Holocaust, as well as to fight Nazism.  Haaretz, an Israeli left-wing newspaper, calls Kantor 'Putin’s man' and 'an oligarch with ties to the Kremlin.'[4] The newspaper notes that it was during Kantor’s presidency that the EJC actively directed the attention of the mass media to incidents of antisemitism in those countries 'toward which Putin’s administration is hostile.'…

"During a recent meeting with Putin, Kantor described the situation of the Jews in Europe as 'the worst since the Second World War.' Putin responded [given the growing antisemitism in Europe] by inviting the European Jews to move to Russia.[5] But the Jews are in no hurry to move, and not because of their fear of antisemitism. Although many Russian Jews are successful entrepreneurs, there aren’t many business opportunities in Russia today because of the [economic] crisis… [Still,]  Jews in Russia do feel comfortable enough. The wild antisemitism of the 1990s is no longer there…"

[1] For example, a prolonged struggle by American Jewry helped to pass the Jackson-Vanik amendment to the U.S. Trade Act of 1974, which put economic pressure on the USSR in order to encourage the adoption of a more open emigration policy.
[2] Gazeta.ru, February 24, 2016.
[3] On February 1987, Gorbachev ordered an amnesty for 140 political prisoners.
[4] See Haaretz.com, February 1, 2016.
[5] See MEMRI Special Dispatch No. 6302, Editorial in Russian Online Paper: Despite The Invitation Putin Extended Them, Jews Are Not Likely To Flock Back to Russia, February 12, 2016.