Former President Of Al-Azhar University Osama Al-'Abd: We Must Reform Our Religious Discourse To Confront The Extremists - MEMRI


"--the world does not stand still and that people who do not renew themselves become weak and perish."

Addressing the Supreme Council for Islamic Affairs, which convened in Aswan, Osama Al-'Abd, former president of Al-Azhar University, called for reform in the Islamic religious discourse. Al-'Abd said that the world does not stand still and that people who do not renew themselves become weak and perish. The conference was aired on Channel 1 of the Egyptian TV on May 14, 2016.
Following are excerpts:

Osama Al-'Abd: "There is an attempt to bring the Islamic nation to its deathbed, a plot to make it weak. You are the ones entrusted with its protection. A heavy responsibility rests upon our shoulders. If we do not rise to the challenge, we shall be held accountable by Allah. It is legitimate to reform and develop the religious discourse, because the world does not stand still, and there is a new thing every day. If people do not renew themselves, they become weak and perish. Therefore, we must always examine the Quran and the sunna of the Prophet Muhammad. People would ask the Prophet Muhammad questions, and he would issue different rulings to different people, to each according to his needs. This is the meaning of reform and development.
[…] 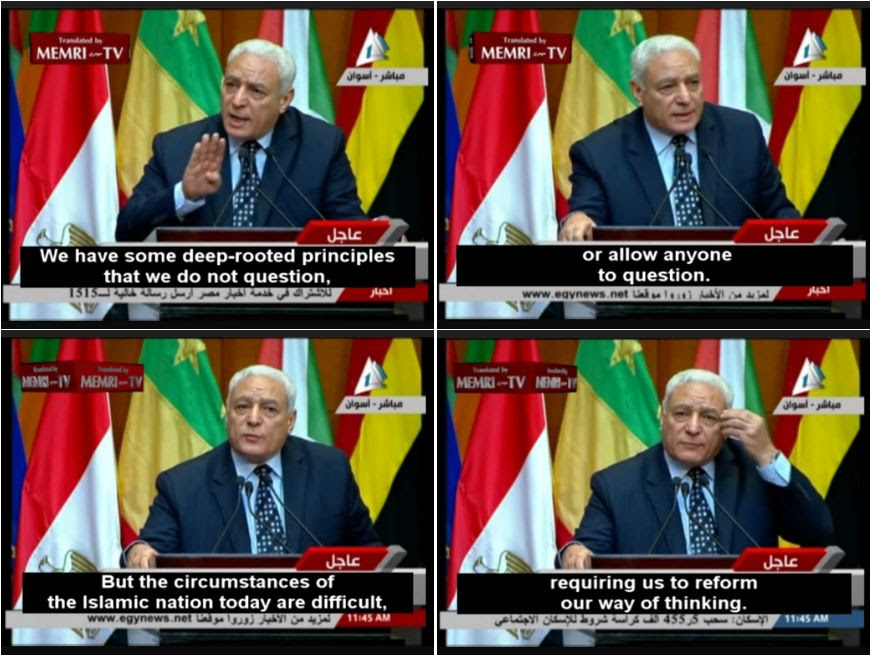 "We have some deep-rooted principles that we do not question, or allow anyone to question. But the circumstances of the Islamic nation today are difficult, requiring us to reform our way of thinking. Active Muslims and active religious scholars are what is needed now. We do not need passive scholars. In all honesty, we must all think in an active way, in order to confront the dark extremism that is always associated with Islam, even though Islam has nothing to do with it. [The extremists] have done more harm to us than to others. Therefore, we must reexamine ourselves and our institutions in an honest and critical manner. Have they fulfilled their obligations? Have we? This is what we are doing in this conference."