"Muslims and Islam have a role in [the terrorist attacks in Europe], because these terrorists derive their ideas and their deeds from Islam," said Aboutaleb, adding that "we cannot sit idly by, and watch how these terrorists destroy, with a single bomb, everything that we and our parents have built in this society."

Interviewed by the Al-Arabiya network on September 23, Rotterdam Mayor Ahmed Aboutaleb called for Muslims in the West to play a constructive role in the societies in which they live and to the show the West "that we are not victims of immigration." "Muslims and Islam have a role in [the terrorist attacks in Europe], because these terrorists derive their ideas and their deeds from Islam," said Aboutaleb, adding that "we cannot sit idly by, and watch how these terrorists destroy, with a single bomb, everything that we and our parents have built in this society." He further said: "By no means can [Nazism] be compared to the current atmosphere in Europe."
Following are excerpts

Interviewer: "Mr. Aboutaleb, from time to time you mention your personal experience, in order to prove that all the talk about racism against Muslims in Rotterdam is nonsense and that Holland is the country where Muslims are treated the best. But some people say that your experience - your rise to high-ranking positions in Holland - is an exception, rather than the rule. Isn't that so?" 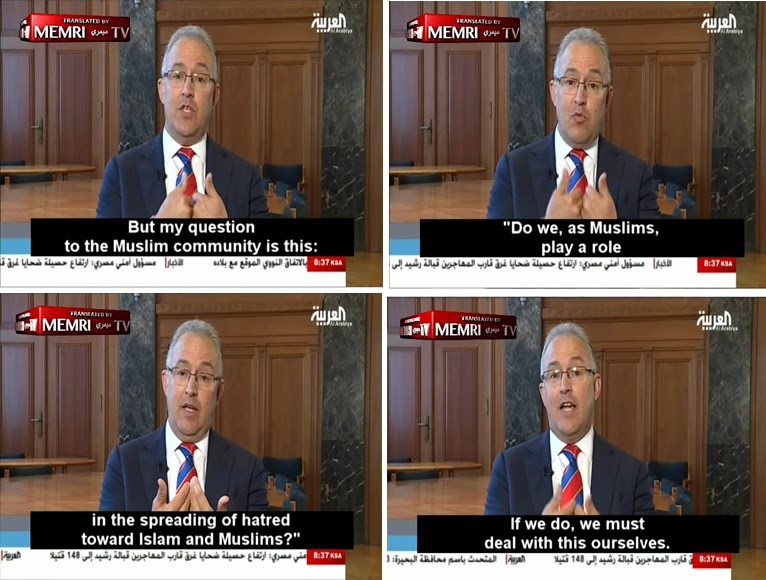 Ahmed Aboutaleb: "I do not think this is true. There are Arabs and Muslims in the parliament, and there are other prominent figures in the field of culture. Some of the best novelists in Holland are of Moroccan origins. This is also the case in sports, in the theater, and in the economy. It is true that their numbers are small, but they are growing. I am not saying - and I have never said - that there is no racial discrimination. Racial discrimination exists. But my question to the Muslim community is this: 'Do we, as Muslims, play a role in the spreading of hatred toward Islam and Muslims?' If we do, we must deal with this ourselves. As the Moroccan and Arabic saying goes: 'We scratch our skin with our own fingernails, before someone else comes along to do it for us.' We must carry out our duties."

Interviewer: "Mr. Aboutaleb, putting aside your aptitude, which many people mention, some people say that the only reason for your success in your positions and your life in Holland is that you accommodate yourself to the views of the Dutch, and of the Europeans in general, regarding Islam and the immigrants. Isn't that so?"

Ahmed Aboutaleb: "This is not true. Ever since I entered politics, I have been saying that I am an Arab Muslim, as well as an Amazigh, that I am a religious Muslim, and that I adhere to my Muslim origins. The difference between myself and others is that I do not believe that the Muslims in the West are victims of the so-called 'immigration' or 'racial discrimination.' All I want is for Muslims to have a constructive role in this society, to make progress through the moderation with which Muslims are familiar, for us to be moderate and to strive, as much as we can, to become a constructive society, and show the West that we have a role in these societies, and that we are not victims of immigration. This is the difference between myself and others." 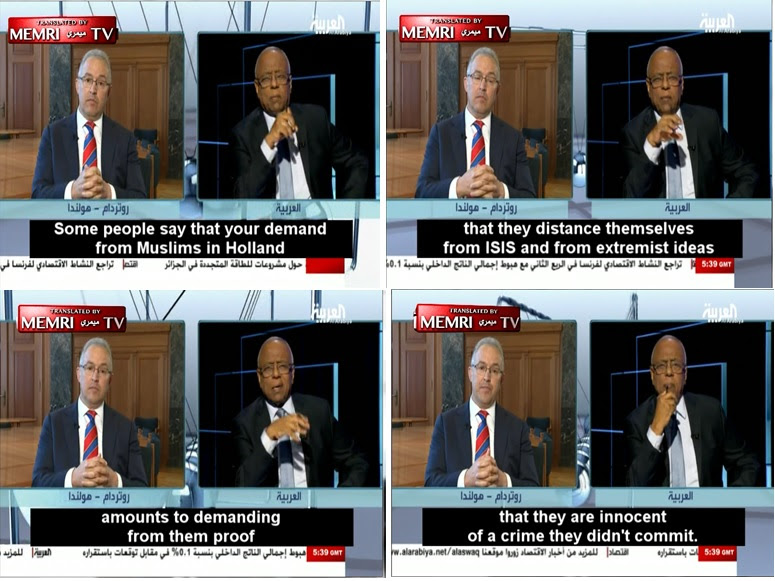 Interviewer: "Mr. Aboutaleb, I must ask a follow-up question. Some people say that your demand from Muslims in Holland that they distance themselves from ISIS and from extremist ideas amounts to demanding from them proof that they are innocent of a crime they didn't commit. This even amounts to leveling empty accusations against Muslims in Holland. Isn't that so?" 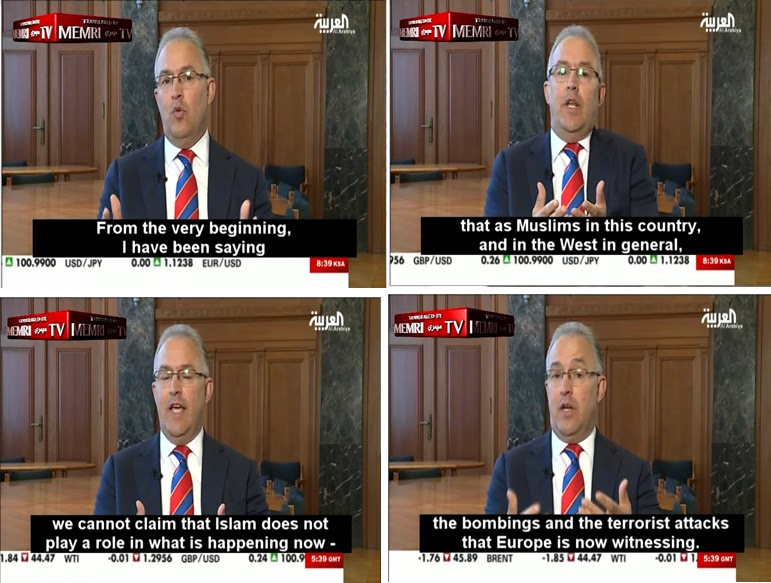 Ahmed Aboutaleb: "This is 100% wrong. From the very beginning, I have been saying that as Muslims in this country, and in the West in general, we cannot claim that Islam does not play a role in what is happening now - the bombings and the terrorist attacks that Europe is now witnessing. Muslims and Islam have a role in this, because these terrorists derive their ideas and their deeds from Islam. They cite the Quran and the Hadith to claim that they have a right to wage Jihad. As Muslims in this country, we cannot sit idly by, and watch how these terrorists destroy, with a single bomb, everything that we and our parents have built in this society."

Interviewer: "Mr. Aboutaleb, it sounds as if you consider these terrorists to be true Muslims."

Ahmed Aboutaleb: "We must not sit idly by. The very least we can do is to say: 'By God, this is evil.' This is what I am saying to the Islamic diaspora in the West: 'At the very least, say: 'By Allah, this is evil'.' We must not stay home and keep silent, because Europe and the West interpret our silence to mean that we agree with these terrorists. This is the difference between myself and other European politicians."

Interviewer: "Mr. Aboutaleb, doubting the Jewish Holocaust, perpetrated by the Nazis, is outlawed in the West, as you know. Shouldn't blasphemy, including against Islam, be outlawed as well?"

Ahmed Aboutaleb: "World War II cannot be compared to what is happening today. In World War II, a powerful man in Germany devised a plan, the sole purpose of which was to exterminate a large number of human beings, whose only crime was that they belonged to the religion he was against. Rationally, we cannot compare what took place in World War II with what we are seeing today. Nazism was an entirely different issue, and by no means can it be compared to the current atmosphere in Europe."