Specifically, Adamsky warns of Russian influence with regard to information, cyber and electronic warfare and the use of special forces — a combination of capabilities that could impact the ongoing balance of deterrence even before Israel and Hezbollah get into kinetic confrontations.

When the Lebanese militant organization, Hezbollah, joined the fight on behalf of Syrian President Bashar Assad pretty much from the beginning of the Syrian civil war, the professional military assessment from Israel was essentially: Have at it. Let them bleed.
“Hezbollah is an enemy that is improving its capabilities in Syria, but any changes in their combat capacity ... shouldn’t warrant, for the foreseeable future, any adjustments to our operational concept,” Brig. Gen. Shmuel Olanski, then-Israel’s chief armored officer, told Defense News in November 2014, more than two years into the now 6-and-a-half-year-old, increasingly brutal bloodbath.
“I wish they will come and confront us directly. That’s when we’ll be able to most effectively harness our superiority," he added.
But then the unforeseeable happened.
Russian President Vladimir Putin entered the war, lending air power, sea power, electronic warfare and special forces to the axis of Hezbollah and Iran’s Revolutionary Guard all fighting from the same war rooms to save Assad.
Even now, more than a year after Moscow joined the fight — with Assad fortified and a resurgent Russian footprint across the Middle East — Israeli officers still publicly flag the toll such battles have taken on the Shiite organization, which has lost some 10 percent of its force on Syrian soil.
Publicly, Israel Defense Forces (IDF) officers still speak about the healthy, professional, friction-preventing ties built up between the two militaries. “I got the feeling that they really see us as a friendly entity; as someone they can work with,” Maj. Gen. Yair Golan, IDF deputy chief of staff, told foreign correspondents here last April.
But a new study, soon to be published by the research division of Israel’s National Security Council, raises a series of red flags regarding Russian influence on Israel’s Iranian-sponsored arch-enemy from the north.
Written by Dima Adamsky, an associate professor at Israel’s Interdisciplinary Center Herzliya and a research fellow at the IDF’s National Security College, the 96-page Hebrew-language report highlights Russian-inspired conceptual, operational and technical lessons that Hezbollah may apply in its next war with Israel.
In “Russian Involvement in Syria: Strategic Significance and Operational Lessons,” Adamsky primarily draws on professional Russian literature to flag potential drivers that may help Hezbollah evolve from a well-armed guerilla movement to a more creative, “learning organization” steeped “more than ever before” in the technologies, tactics and procedures of advanced, combined arms war.
Hezbollah’s close proximity over a protracted period to manifestations of Russian “operational art” — from planning and designing operations to learning and adapting while fighting — may challenge and possibly erode Israeli superiority, he writes.
Specifically, Adamsky warns of Russian influence with regard to information, cyber and electronic warfare and the use of special forces — a combination of capabilities that could impact the ongoing balance of deterrence even before Israel and Hezbollah get into kinetic confrontations.


With respect to the former, Adamsky documents Russian inroads in harnessing electronic information warfare at the tactical level to interfere, repress, and sabotage enemy forces and the decision-making process of the opposing side. He also cites claims by Russian experts of Moscow’s ability to exploit the electromagnetic spectrum to its benefit for defensive and offensive cyber operations.

“Efforts to erode IDF capabilities in the electro-magnetic domain through techno-operational practices learned from the schools of Russian electronic warfare experts are liable to interfere with the IDF ability to wage sensor-to-shooter strike operations,” he writes. 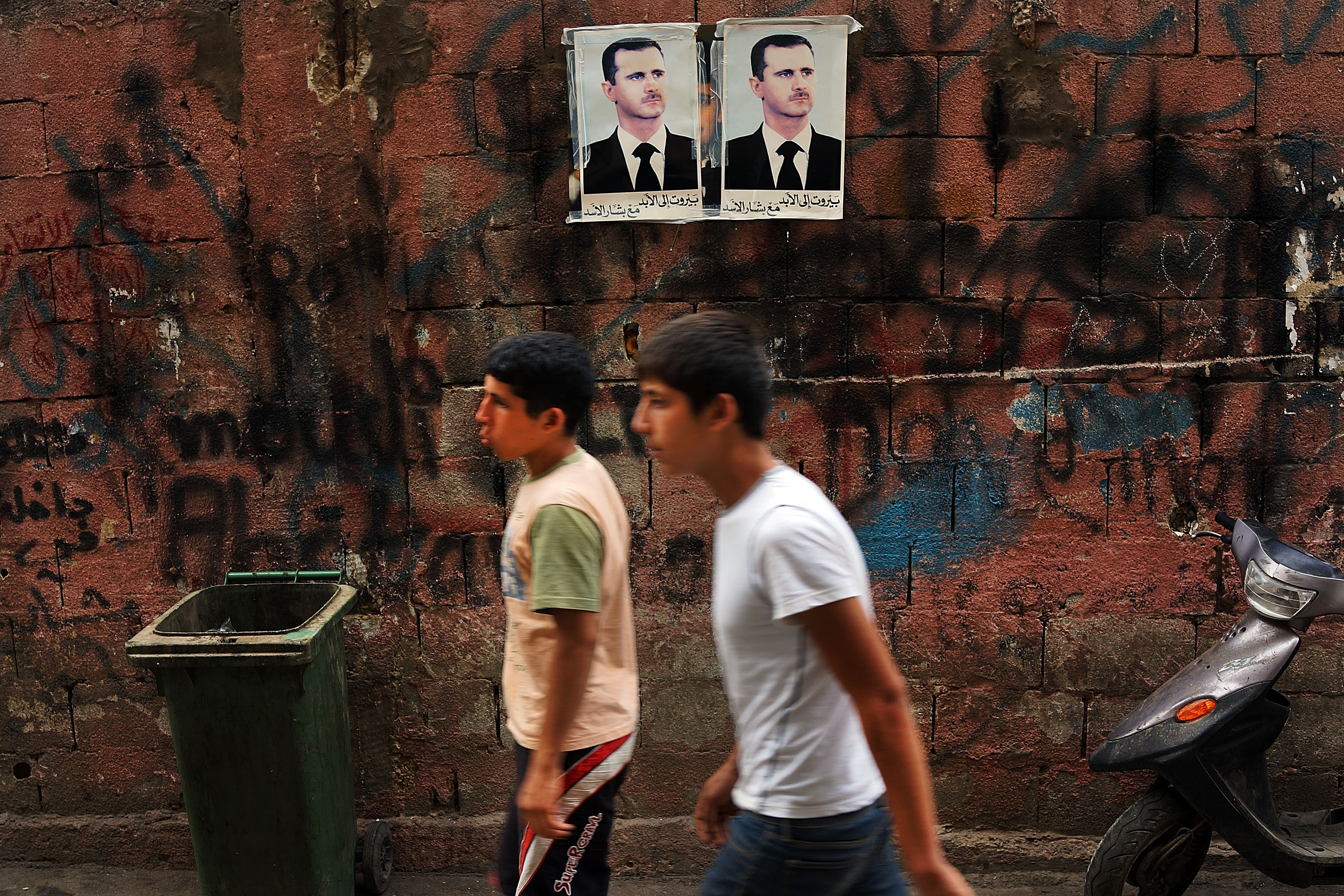 Pictures of Syrian President Bashar Assad are viewed along a wall in a poor, Hezbollah-influenced neighborhood with a high concentration of Syrian refugees on June 30, 2013, in Beirut, Lebanon.
Photo Credit: Spencer Platt/Getty Images
According to Adamsky, even if Hezbollah manages in small measure to interfere with the IDF’s digital command and control network, the impact on Israel’s maneuvering capabilities could represent “a new reality” for Israeli war planners.
“Electronic warfare, when combined with cyber and kinetic capabilities and proficiency in [Russian operational concepts,] has the potential to create for the IDF ‘blindness’ and ‘deafness’ in certain operations,” he warns.
As for use of special forces, Adamsky devotes a full section on organizational and operational changes in Russia that have played out in recent operations in Crimea, eastern Ukraine, and Syria; and the predominant role of Moscow’s Main Intelligence Directorate (GRU) in combat operations.
Given Russia’s practice of integrating local, elite forces on the ground, it is “reasonable,” Adamsky writes, to expect that Hezbollah’s Radwan special forces battalion has internalized the doctrine and practical lessons of joint commando operations. More than that, he writes that Hezbollah’s battle-hardened special forces will serve as “knowledge agents” capable of training even more elite forces for future war with Israel.
But beyond actual combat, he suggests that Russian influence may be driving a paradigm shift in Hezbollah’s “theory of victory” vis-à-vis Israel. Instead of its low-signature strategy of staying in the fight against Israel as long as it can without losing, Russian influence could be expediting Hezbollah’s long-expected transition to higher-signature, initiative operations into Israeli territory.
“Until now, the Radwan force was employed as a type of advanced infantry. But following joint operational experiences [in Syria], it can turn into a type of commando force not only for supporting the overall war effort, but for creating meaningful operational effects [against Israel],” he writes.
The more Hezbollah is capable of using its special forces for cross-border raids or to seize Israeli territory — if only for a short while — it will deny the IDF the ability to deliver the so-called victory picture that is demanded by Israeli leaders.
And even when waging defensive operations, lessons from Russian special forces, particularly in nighttime operations, could make it more difficult for the IDF to maneuver deep into Lebanese territory.
“Massive training in the techniques of Spetsnaz (Russian special forces) could considerably improve the general readiness of Hizbolloah and its ability to deal with Israeli special units that penetrate into different theaters,” he writes, using an alternative spelling of the Lebanese militant group.
Amos Yadlin, a retired IDF major general and former director of Israeli military intelligence, said he had not yet read Adamsky’s report. He noted, however, that Hezbollah is learning not just from the Russians but from Iran's Revolutionary Guard, the Syrian regime and other sources over many years.
Yadlin acknowledged Hezbollah may be gaining significant insights from serving as Moscow’s “foot soldiers on the ground” and from sitting in the same war rooms commanded by Russian officers. However, he cautioned against drawing extreme conclusions from the past year of joint combat in Syria.
“Sometimes there’s what we call negative learning, meaning lessons that are wrongly applied or applied mistakenly to irrelevant or inappropriate scenarios,” said Yadlin, now the director of Tel Aviv University’s Institute for National Security Studies.
“We all know that Hezbollah, unfortunately, is much stronger than it was since last 2006 Lebanon War. It has much more capable rockets and missiles in unbelievable quantities, it has a spectrum of Iranian UAVs, Yakhont shore-to-ship sea-skimming missiles and even Scuds," he said.
“So in my eyes, the Russian influences are not necessarily operational or tactical game changers. Rather, they are strategic game changers since Putin has strengthened the gravest enemies of Israel.”