As the coming Paris conference looms close, avid two-state proponents should understand what the prescription they advocate really means: Israel through the binoculars of a Palestinian “intelligence officer.”

If a Palestinian state is established, it will be armed to the teeth. Within it there will be bases of the most  extreme terrorist forces, equipped with anti-tank and anti-aircraft shoulder-launched rockets, which will endanger not only random passers-by, but every airplane and helicopter taking off in the  skies of Israel and every vehicle traveling along the major traffic routes in the coastal plain...[T]he frontiers  of the Palestinian state will constitute an excellent staging point for mobile forces to mount attacks on  infrastructure installations vital for Israel’s existence, to impede the freedom of action of the Israeli  air-force in the skies over Israel, and to cause bloodshed among the population...in areas adjacent to the  frontier-line... - Shimon Peres, “Tomorrow is Now” (Keter publishers),  pp. 232, 255.
…Israel, small and exposed, will neither be able to exist nor to prosper if its urban centers, its vulnerable airport and its narrow winding roads, are shelled.  This is the fundamental difference between them and us, this is the terrible danger involved in the establishment of a third independent sovereign state between us and the Jordan River. - Amnon Rubinstein, ‘The Pitfall of a Third State’, Haaretz, Aug 8, 1976.

These two citations encapsulate, with chilling accuracy, the deadly dangers to which Israel would be exposed if a Palestinian state were to be established on the commanding hills overlooking the country’s heavily populated coastal plain, in which about 80% of the country’s civilian population and commercial activity, are located.

As the upcoming Paris conference, designed to foist a two-state reality on Israel, draws closer, it is vital that the public, both in Israel and abroad, understand just how precarious Israel’s situation is liable to be if such a perilous prescription be adopted. These dire dangers are graphically conveyed by the following series of photographs taken from sites inside the territory designated for any future Palestinian state. They demonstrate dramatically how vulnerable and exposed Israel would appear through the binoculars of a Palestinian “intelligence officer” (a.k.a. terrorist). 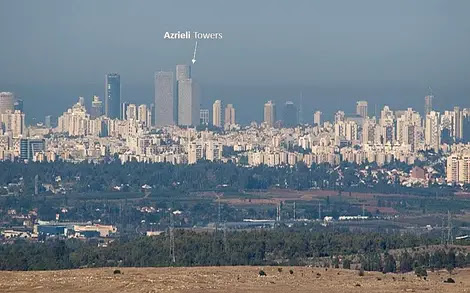 The clearly visible Azrieli Towers complex, an iconic feature of the central Tel Aviv skyline, houses a three-story shopping mall and recreation area, a thirteen-floor luxury hotel, and numerous prestigious commercial companies, including many of the country’s leading law firms.  And, oh yes, it is adjacent to the compound (known as “Camp Rabin”, named after the late Yitzhak Rabin) that comprises Israel’s Defense Ministry and the headquarters of the IDF General Staff… The Aviv Tower, located in the bustling vicinity of the Ramat Gan Diamond Exchange, is the tallest building in Israel, surrounded by popular restaurants, cafes, commercial enterprises and recreational facilities. The Akirov Towers houses the former apartment of Ehud Barak, underscoring the stunning fact that there is a line of sight between the residence of the then-Defense Minister and …“Palestine”! 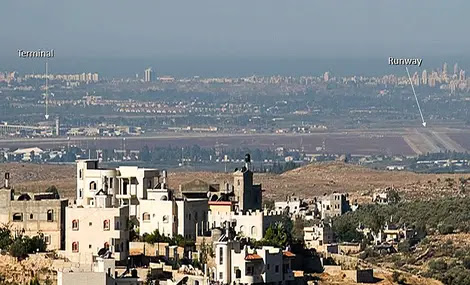 Main terminal & runway at Ben Gurion Airport - as seen from “Palestine”: This shot underscores just how utterly exposed Israel’s only international airport would be to any hostile elements (renegade or otherwise), deployed on the hills overlooking the main terminal and runway. 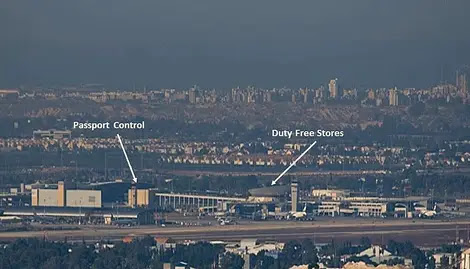 For those familiar with Ben Gurion airport, the long inclined corridor connecting the passport control stations with the large duty free area is clearly visible from well within “Palestine”.

A tempting target: The unnerving sight of a plane clearly visible taking off on the main runway—hopelessly exposed to any nefarious forces in the nearby hills inside “Palestine”. 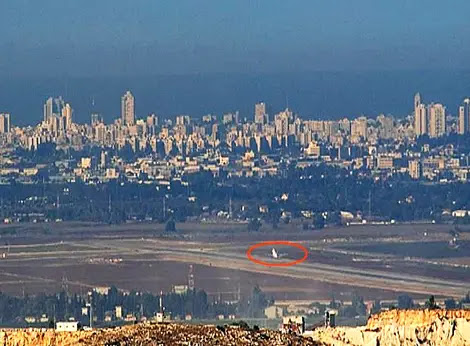 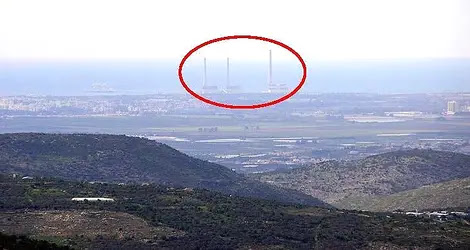 Hadera Photo Credit Yohar Gal
The Orot-Rabin power station, near Hadera (named after the late Yitzhak Rabin): The plant is currently Israel's largest power station with almost 20% of the Israel Electric Corporation's total generating capacity.  It is adjacent to Caesarea, a very upmarket locality, home to many of Israel’s rich and famous, including current PM Benjamin Netanyahu. Taken from the site of Homesh, one of the four communities destroyed in Ariel Sharon’s 2005 disengagement from Northern Samaria (which took place at the same time as the Gaza disengagement). 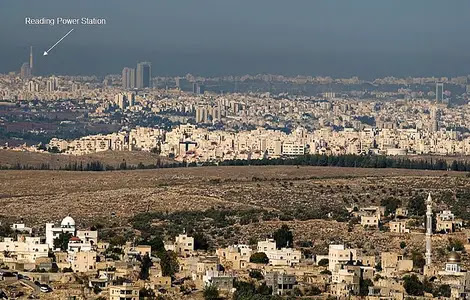 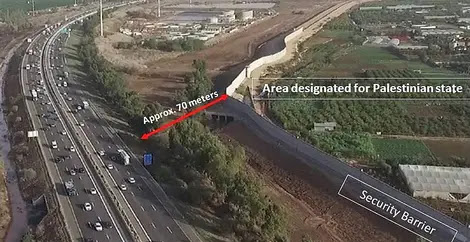 Taken near the Palestinian-Arab city of Qalquilaya, a hot bed of terror in the past, this drone shot underscores the grave danger to traffic on the Trans-Israel highway (Route 6), connecting the North of the country with the South. In light of the threat of terror tunnels, mortar fire and rocket attacks emanating from Gaza, little imagination is required to visualize the consequences of evacuating areas abutting one of Israel’s major transportation arteries.

Pictures worth thousands of words

These photos convey the stark truths, expressed in the introductory excerpts above, as to the dire dangers a Palestinian state would pose to Israel’s “urban centers, its vulnerable airport… and traffic routes in the coastal plain … as well as to infrastructure installations vital for Israel’s existence…”

So, if you still support the two-state formula—beware! You just might get what you wish for!


Dr. Martin Sherman served for seven years in operational capacities in the Israeli Defense establishment, was ministerial adviser to Yitzhak Shamir's government and lectured for 20 years at Tel Aviv University in Political Science, International Relations and Strategic Studies. He has a B.Sc. (Physics and Geology), MBA (Finance), and PhD in political science and international relations, was the first academic director of the Herzliya Conference and is the author of two books and numerous articles and policy papers on a wide range of political, diplomatic and security issues. He is founder and executive director of the Israel Institute for Strategic Studies (www.strategicisrael.org). Born in South Africa,he has lived in Israel since 1971.