-- carried too far, the fear of Islamophobia prevents a realistic response to Islamism’s attacks on the West 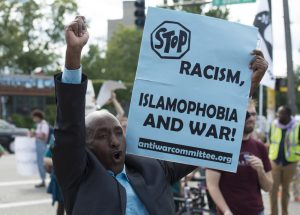 US officials have properly worked hard to prevent Islamophobia. Perhaps the most notable example was President George W. Bush’s visit to the Washington, DC Islamic Center six days after the 9/11 attacks, in which 19 Muslims had killed 3,000 Americans (including Muslims). Bush’s purpose in visiting the Center was to tell Americans that “Islam is peace,” and that they should not hold the 9/11 slaughter against other Muslims.

In Europe, IPP is making it harder for governments to protect their citizens against criminal violence by Muslim immigrants. The violence is a major phenomenon, but even sensible, non-bigoted officials are unable to so much as discuss it without being condemned as anti-Muslim. This enforced silence has contributed to the rise of popular anti-immigration movements that might overturn Europe’s political balance, as President Trump’s election has done in the US.

One of the more extreme examples of IPP was President Obama’s denial that Islamic State (ISIS) has anything to do with Islam. ISIS officially claims to be the new Islamic Caliphate governed by Islamic law, and thousands of Muslims from all over the world have enlisted to fight for IS because they see it as their duty as Muslims.

ISIS espouses not just their particular view of Islam as a religion, but also the totalitarian political ideology generally referred to as “Islamism.” The suffix “ism” signals a crucial distinction between the religion and the political ideology.

Although they went too far, Presidents Bush and Obama had good strategic reasons to fight Islamophobia. Up to now, the Islamist-declared war against the US and the West is being waged by only a small fraction of the world’s 1.6 billion Muslims. One of the greatest dangers of this war is the possibility that a larger fraction of Muslims might join the Islamists because they see Western defensive measures as attacks on their religion.

The main recruitment message used by Islamist organizations such as Al Qaeda and ISIS is that America and the West are attacking Islam. They call on young Muslims to join them in defending Islam against this US and European attack. (While the Islamist leadership believes Muslims are required by their religion to be at war with infidel nations, this is not the principal argument they use to get other Muslims to join them.)

American troops have been fighting in Iraq and Afghanistan for years, and American planes are bombing Syria – while no Muslim national armies are attacking any Western country. It is thus unsurprising that the claim that Islam is being attacked sounds plausible to many Muslims. And Western condemnation of Islamic traditions concerning, for example, the role of women and the integration of religion and politics also feels like an attack on Islam.

Americans generally recognize that among the key reasons their troops have been sent to Iraq and Afghanistan was to prevent more 9/11 type attacks. But most people in major Middle Eastern countries do not believe al Qaeda perpetrated 9/11. It is much more common in the region to believe that the US or Israel engineered the destruction of the World Trade Center as an excuse to attack Muslims. They don’t accept that American fighting in the Middle East is defensive. For example, one poll indicated that 55% of Egyptians believe the US or Israel was responsible for 9/11, and 18% said they don’t know who was. (Incidentally, about a quarter of Americans also don’t accept the official view of who was responsible for the 9/11 attack as the whole story.)

As the new US administration makes the necessary move from the Obama administration’s IPP towards a more accurate view of the connection between Islamist terrorists and Islam, it must steer a delicate course between two dangers. On the one hand, the US needs to understand its enemy. President Trump has stressed that he is not afraid to speak the enemy’s name. On the other hand, it is crucial that the US not speak or act in a way that leads more Muslims to believe the US is the enemy of Islam. It would be catastrophic if the present relatively small war became a full-blown, worldwide religious war.

Even if the government carefully says it is fighting “Islamism” or “radical Islam” rather than Islam itself, a Muslim audience might not hear the difference. In a recent joint press conference by Turkey’s President Recep Erdoğan and German PM Angela Merkel, Erdoğan publicly contradicted Merkel’s statement that Islamism is different from Islam.

Most urgently, the US government needs to act to get public support from the large share of American Muslims who reject Islamist terrorism and patriotically support their adopted country. At present, they are not very vocal. Many major American Muslim organizations and mosques do not represent the views of anti-Islamist Muslims. Such organizations – for example, CAIR and the Muslim Public Affairs Council – dominate the discourse because previous US administrations gave them legitimacy, despite their sympathy with the Muslim Brotherhood and other enemies of the US. Correcting this mistake needs to be high on the new administration’s agenda.

The testimony of organizations representing large numbers of anti-Islamist and anti-terrorist American Muslims could influence Muslim perceptions in other countries as to whether or not the US is at war with Islam.

During the Cold War, a major theme of nuclear strategy was the need to avoid an accidental war that neither side intended when one side feared it was being attacked. Westerners should have similar concerns about Muslims erroneously believing the West is attacking their religion. At the same time, Westerners have an interest in vigorously and unapologetically countering the war that Islamist extremists are in fact waging against the West.


Dr. Max Singer, a senior research associate at the Begin-Sadat Center for Strategic Studies, is a founder of the Hudson Institute. He specializes in US defense policy, US-Israel relations, and long-term strategic planning.