Unmasking BDS: A new method to fight the movement has emerged, and it's working - Barry Shaw


From Radiohead's adamant refusal to take the heat from anti-Israel advocates to the bestseller "BDS for Idiots," the fight against the movement is going strong. 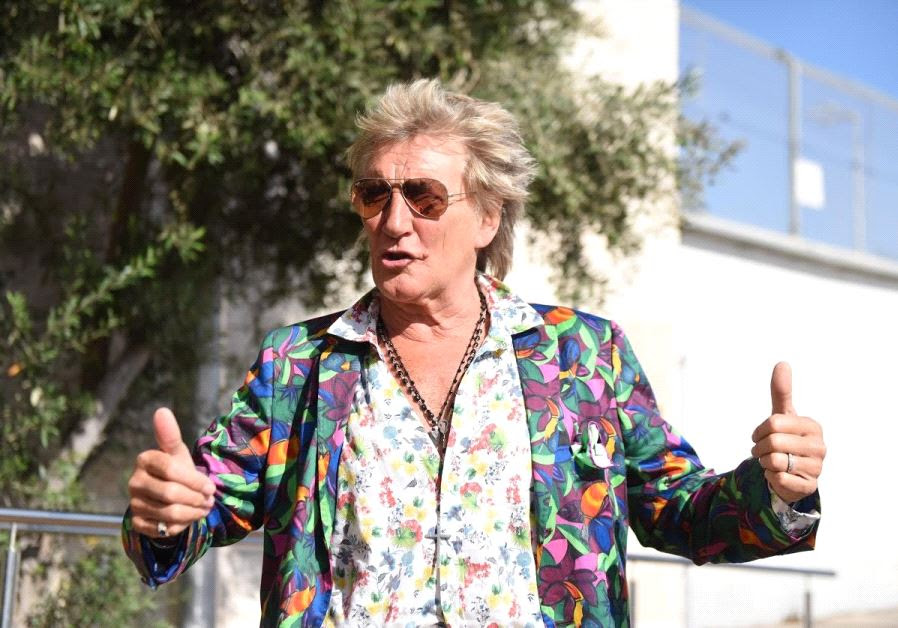 Rod Stewart arrives in Israel ahead of his concert in Tel Aviv, June 13, 2017. (photo credit:LIOR KETER)

After decades of allowing the BDS Movement a free playing field on which to spin their allegations against Israel, a trend is discernible that is making headway into the jumble of their narrative. Slow but sure progress is being made against the radical accusations that have been fired at the Jewish state.

The old tactic of branding Israel as the Start-Up Nation had limited value. What benefit is it extolling the wonders of Waze if the other side is using negative emotional imagery of a Zionist state as child-killers and brutal occupiers? Instead, a new strategy took root. Take Israel out of the equation. Put the spotlight onto our enemies. Concentrate on the messaging and the character of our BDS adversaries. Target those who are attacking Israel and Jews, and retaliate directly at them. Expose them and expose their hypocrisy and lies.
The anti-Israel BDS advocates are caught in a trap of their own making, namely the paucity of their argument and often the deep antisemitism that drives them.

The battle has been joined and rapid progress has been made. Part of the offensive involves the naming and shaming of Israel’s BDS enemies. Often this is done via the social media as with the Canary Mission website that documents individuals and groups promoting hatred against Israel and Jews on college campuses in America. Their site catalogues people and groups listing their names, locations, which radical group they belong to, the roles they play, and detailing the negative actions or statements made by them. Their profile usually includes a headshot photo. Often the person’s profile includes their social media presence.

In the past, entertainment figures wielded influence in the cultural world. Recently, their radical bias has been exposed and they are increasingly ignored. One example is Roger Waters of “Pink Floyd” fame. Once a BDS icon, he has become a laughingstock, trashed by artists who ignored his demands for them to boycott Israel. Aerosmith was quickly followed by Radiohead, Rod Stewart and the Pet Shop Boys in performing in front of huge crowds in Israel.

After pressuring Radiohead for months, the band’s Thom Yorke clobbered Waters in a scathing Rolling Stone interview telling him, “It’s deeply disrespectful to assume that we are either so misinformed or retarded that we cannot make decisions ourselves.”

Yorke went on, “I thought it was patronizing in the extreme, really upsetting, that an artist I respect thinks we are not capable of making a moral decision ourselves after all these years.”

Radiohead’s moral decision was to come to Israel and entertain their multicultural fans.

Charles Asher Small, the founder of the Institute for the Study of Global Antisemitism and Policy (ISGAP) at McGill University, told attendees at the Annual IDC Herzliya Conference that his NGO is working on the documentary, “Wish You Weren’t Here,” which examines contemporary antisemitism and the BDS movement. He points to Waters’s history of anti-Jewish imagery, including having a floating balloon in the form of a pig at his earlier concerts with a Star of David and dollar signs emblazoned on its body, and his comparisons of Israel to the Nazis. A new ISGAP website calls to boycott Waters’s concerts in reprisal. The website wedontneedrogerwaters.com asks people to sign a petition urging others to avoid his concerts in protest.

A 2016 best-selling book, “BDS for Idiots,” urged anti-BDS campaigners to take Israel out of the equation when debating BDS activists and instead to concentrate on the BDs narrative. The book suggests we are engaged in an intellectual ju jitzu fight in which our anti-BDS campaigners need to find the BDS weak spots, of which there are many, and use them effectively to unbalance and ultimately defeat their arguments.

The book details with glaring facts how those who profess to be pro-Palestinian are caught out not really caring and even damaging Palestinian lives.

Evidence of this became clear when BDS protests led SodaStream to move its factory from Mishor Adumim in Judea and Samaria to the Negev, causing unemployment for hundreds of Palestinian workers. Palestinians lives were damaged, but BDS looked at this as a victory.

Recently, Sodastream and the Israeli government found a way in which Palestinian workers can be bused to the new Rahat factory to be reemployed and reunited with their Jewish and Beduin co-workers.

This case clearly illustrates who harms and who cares for Palestinian workers. It exposes the fraudulent message of BDS.

Pro-Israel groups have been surprised to discover the relative ease in setting back BDS by going on the offensive.

In Spain, Angel Mas and his pro-Israel ACOM legal organization has repealed several BDS actions taken by Spanish cities by applying law against council decisions to boycott Israel. They include La Guardia, the Rivas Vacia district of Madrid, the Olesa district of Barcelona, Campezo and Valencia.

If BDS is being beaten in Spain it is due to Angel Mas and ACOM.

The application of domestic laws has brought multiple successes to UK Lawyers for Israel (UKLFI), a voluntary group of British lawyers, who have countered BDS resolutions by student bodies at several UK universities by advising the campus administrators that activating student BDS demands to boycott or divest from Israel would put them in serious breach of UK charity laws that could jeopardize their charitable status by which they receive government funding. UK campuses where BDS resolutions became toothless votes thanks to UKLFI include Kings College, City University, SOAC, University College London, Warwick, York, Brunel and East Anglia.

The Trustee Board of Edinburgh University overturned a BDS decision following the intervention of the campus’s Israel Engagement Society with the legal assistance of UK Lawyers for Israel. UKLFI also helped Stand With Us UK, the pro-Israel student action group, to have Bath University reject BDS.

UKLFI anti-BDS legal activities are not confined to campus. Jonathan Turner, the founder of UK Lawyers for Israel, told The Jerusalem Report that his voluntary legal group could do much more with the help of additional donors and volunteers.

American cities and states are lining up to kick back against BDS. In May, Nevada became the 20th US State to introduce legislation outlawing BDS. This success was the fruit of the Christian Allies Caucus, an American group devoted to strengthening ties between Christians and Israel, and the expert legal work of Prof. Eugene Kontorovich through the Israel Allies Foundation.

This came about after a chance meeting between Kontorovich and South Carolina State legislator, Alan Clemmons. On a visit to Israel, Clemmons met the owner of AL Solutions, a company that was being impacted by BDS. This Israeli company had opened a factory in Clemmons’ state.

Clemmons was quick to realize the financial damage BDS could cause to his state, financially and socially, should unemployment follow BDS actions. Clemmons said of his meeting with Kontorovich, “Here was one of the brightest minds in the world on addressing BDS under the US Constitution.”

His state was an early initiator of anti-BDS legislation. Across America and globally, BDS is being unmasked and outlawed at local, city and state levels.


Barry Shaw is a senior associate at the Israel Institute for Strategic Studies. He is the author of the best-selling book ‘1917: From Palestine to the Land of Israel.’