Canadians seem just about as fed with their leftist elites up as Americans were in the 2016 elections.

Canadians seem just about as fed with their leftist elites up as Americans were in the 2016 elections. Prime Minister Justin Trudeau is polling far worse than President Trump, and voters in Ontario and Quebec, the two most populous provinces, are poised to throw out their left leaning governments in elections the spring.

Chris Tomlinson of Breitbart has the story.

Source: Angus Reid Institute
If elections were held now, according to the Angus Institute polling, the conservative leader Andrew Scheer would become the Canada’s prime minister. Luckily for Trudeau, federal elections are not slated until 2019. The disgraceful spectacle he made of himself and his family in India have made him a laughingstock around the world, and set back Canada’s relations with India.

But voters in Ontario and Quebec will elect their leaders this spring, and seem to be fed up with political correctness and mass immigration, legal and illegal, issues that are powerful on both sides of the border.


In Ontario, former Toronto city councillor and brother of the late Toronto mayor Rob Ford, Doug Ford, won the leadership race of the Progressive Conservative (PC) Party earlier this month running on a largely populist platform promising to fight for average voters against the establishment.
Recent polls have shown Ford’s PC party are likely to win a large majority in the Ontario election in June.
Ford is up against current Liberal Premier Kathleen Wynne, who has become infamous for massively increasing the Ontario debt and for her social justice policies such as passing a bill that could allow the Ontario government to take away children if their parents do not accept their child’s chosen “gender identity”.

In Quebec, where ethnic politics of the French speaking majority have dominated for decades, mass migration of Muslims from French-speaking territories and illegal immigration are powering a reaction:


In Quebec, the dramatic rise of the centre-right anti-mass migration Coalition Avenir Québec (CAQ) has sent shockwaves through the province where the separatist Parti Québécois (PQ) and the Liberal Party have long dominated provincial politics. 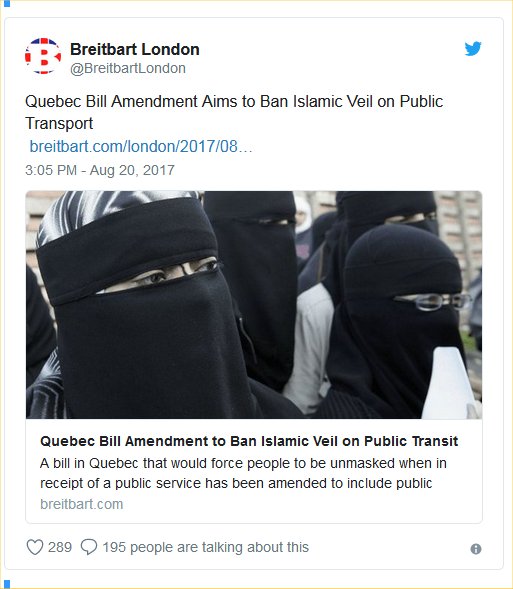 For now, CAQ has a small lead over the two established parties:


Recent polls show CAQ leading both establishment parties with a recent poll from March 1st, showing the party at 37 per cent.

In most of the industrialized countries of the Western world, populism, is surging as resentment of top-down imposition of mass immigration and political correctness has provoked a strong reaction. President Trump has become the de facto leaders of a global populist movement.