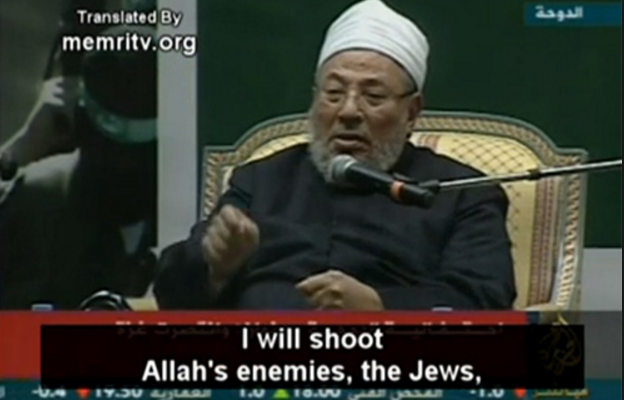 
The BBC reported Monday that Apple has heard the pleas of the group and removed an app produced by Living Hope Ministries from its app store. Google and Amazon are being encouraged by activists to follow suit.
A download of the app reveals that its contents are essentially the same as what can be found on the Texas-based ministry’s website. The ministry describes itself as a “Christian ministry focused on sexual wholeness.”
An article found on the Living Hope Ministries website titled “How Do I Help My Gay Friend?” addresses the ministry’s stance on how Christians can help their gay friends.

Meanwhile, a Qaradawi app packed with anti-Semitism is just fine.


A controversial mobile app launched by the spiritual leader of the Muslim Brotherhood is continuing to be promoted despite calls for it to be banned.
The Euro Fatwa App was created by the European Council for Fatwa and Research (ECFR), which was founded by Yusuf Al Qaradawi – a Qatar-based figure who has previously been dubbed “a terrorist” and banned from the US, UK and France for his extremist views.
It contains an introduction by Al Qaradawi, now 93, in which he makes derogatory references to Jews while speaking about historic fatwas.

Google dumped the app, but as of this writing, it’s still available at Apple’s app store.