The Revolutionary Guards: The Anatomy of a State Terrorist Organization - Dr. Reza Parchizadeh


The IRGC is responsible, either directly or indirectly, for most of the worst terrorist outrages the world has ever seen. 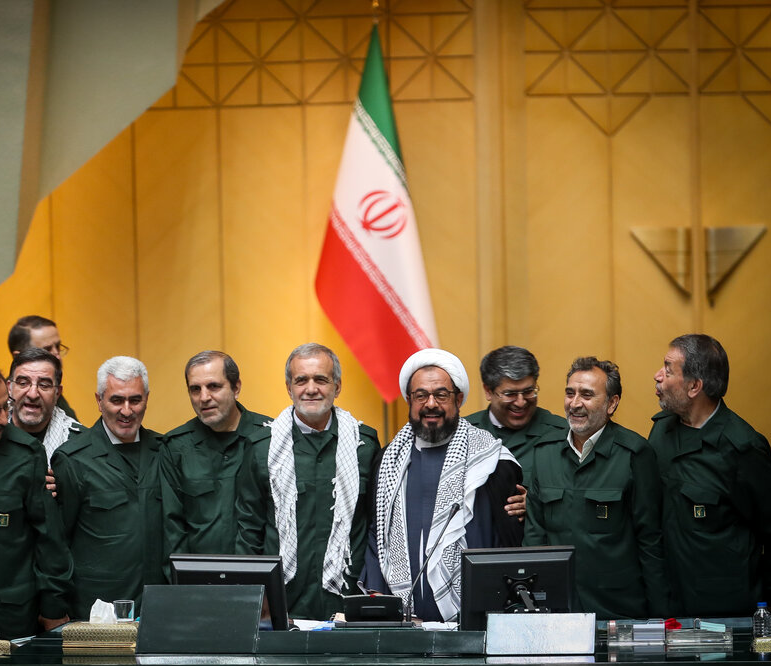 EXECUTIVE SUMMARY: The Islamic Revolutionary Guards Corps (IRGC) was originally intended by the Islamist regime to be an ideologically oriented militia that would compensate for the regular Iranian army’s lack of revolutionary zeal. It has since replaced the regular army as Iran’s main military force and has spent decades working doggedly to export the regime’s Islamist brand of imperialism and conquest to the rest of the region and around the world. The IRGC is responsible, either directly or indirectly, for most of the worst terrorist outrages the world has ever seen. The US declared the Guards a state terrorist organization in 2019, but it needs to be completely dismantled.

The Guards are distinct from the classic Iranian army. Iran has had a regular army in the manner of modern Western armies since the early 20th century. However, after the Islamist Revolution of 1979, the army was deemed insufficiently revolutionary by the country’s new leaders. The mullahs decided to create an ideological militia that would compensate for the army’s supposed lack of ideological zeal. Thus was born the IRGC.

However, before the revolution, the core of the Guards—which was composed of hardline Islamists and leftists—had been trained and battle-hardened in Syria and Lebanon during their ongoing internal and international conflicts, the most important of which was the Lebanese Civil War (1975-90). Indeed, the regional and later global interest and reach of the Guards stems from the fact that they started their fight as part of an international anti-Western and anti-Israeli effort that continues to this day.

In the course of the Iran-Iraq War (1980-88), the Guards gradually replaced the regular army as Iran’s main military force. After the war—which ended in a stalemate slightly in favor of Iraq, and which directed the Islamists’ ambitions toward a different kind of foreign adventure—the Guards became the regime’s main instrument for exporting its Islamist brand of imperialism and conquest to the wider Middle East and the rest of the world.

The notorious Quds Force branch of the IRGC was formally established in the early 1990s to systematically carry out the Islamist regime’s program of extending its ideological and political influence beyond the borders of Iran. Since its establishment, the Quds Force, in line with its mandate, has been engaged in some of the world’s bloodiest conflicts, including the Bosnian War (1992-95), the Afghan Civil War (1992-96), the Israel-Hezbollah War (2006), the Syrian Civil War (2011-present), and the Yemeni Civil War (2015-present).

The Quds Force is tasked with organizing and supporting pro-Iranian-regime non-state actors such as Hezbollah in Lebanon, Hamas and Islamic Jihad in the Palestinian Territories, the Houthis in Yemen, and Shiite militias in Iraq, Syria, Bahrain, Saudi Arabia, and Afghanistan. The Quds Force is also known to have occasionally worked with and supported operations of Sunni Islamist forces that are not necessarily affiliated with the Shiite Islamist regime in Iran, including al-Qaeda, the Taliban, and ISIS. In those cases, the common targets have usually been Westerners, Arabs, Israel, and Jews worldwide.

The Guards initially took little overt part in politics in Iran. Ayatollah Khomeini, the leader of the revolution and founder of the Islamic Republic, issued an injunction forbidding the Guards from entering the political arena. However, after the Iran-Iraq War, Khomeini’s death, and Khamenei’s ascent to the leadership—which sparked a domestic power struggle and brought about a sea change in strategic priorities overseas—the Guards started to openly enter Iranian politics.

Like all military forces in ideological, totalitarian regimes such as the Brown Shirts/SA/SS in Nazi Germany, the Red Army in the Soviet Union, and the Chinese and Cuban armies, the Revolutionary Guards see themselves as the embodiment of a revolutionary ideology, and as such consider it their mandate to enforce and advance that ideology by any means necessary. In the case of the Guards, ideology mandates the establishment of a global Shiite Islamist government by subduing all ideo-mythological adversaries and conquering the whole world, with the US (Great Satan), Israel (Little Satan), and Saudi Arabia (Wahhabi infidels) as the arch enemies. It goes without saying that the Guards are inherently antisemitic and anti-Sunni.

To fulfill that goal, the Revolutionary Guards have dominated not only the military but also the economy and politics in Iran. Today, practically all Iranian officials in any capacity are members, either former or present, of the IRGC. It is estimated that around three-fourths of Iranian MPs are or were members of the Guards. The most prominent Guards alum today is the current speaker of the Majlis (parliament), Muhammad Bagher Ghalibaf, who was a brigadier general and commander of the IRGC Air Force. In addition, almost all of Iran’s trade, industry, and banking is run by the Guards or their affiliates. The Guards also maintain a tight monopoly on import/export and overseas investment, which is their main conduit for money-laundering on the international stage.

During their history, in line with their goal of exporting Islamist ideology, subduing “enemies of Islam” and establishing zones of influence around the world, the Revolutionary Guards have committed some of the most heinous acts of terrorism the world has seen. It can be said that most of the major acts of terrorism against Westerners, Jews, and Sunni Arabs were either directly conducted or indirectly orchestrated by the Guards.

Some of the better-known of these terrorist attacks by or involving the Revolutionary Guards are the Beirut barracks bombings (1983) during the Lebanese Civil War, which killed 307 American and French peacekeeping forces; the Lockerbie bombing (1988), which brought Pan Am Flight 103 down over Scotland, killing all 259 people on board; the Argentine Israelite Mutual Association bombing (1994), which killed 85 and injured hundreds; the Khobar Towers bombing (1996), which targeted the living quarters of the coalition forces in Saudi Arabia and killed 19 US Air Force personnel and injured close to 500; the September 11 attacks (2001) that destroyed the World Trade Center, resulting in the deaths of 2,996 and the injuring of over 6,000; and the attack on US government facilities in Benghazi, Libya (2012), which killed US Ambassador Christopher Stevens and three others.

In addition to these major terrorist attacks, the Revolutionary Guards and their proxy forces are collectively responsible for the ongoing killing of coalition forces in the Middle East; creating unrest as well as engaging in mass trafficking of narcotics in Latin America; taking Western citizens hostage in the Middle East; war crimes in Syria and Yemen; and posing the most severe existential threat to Israel. As part of its “campaign between wars,” the IDF has been pounding the Guards’ bases and units across the Middle East for at least a decade. In response to the Guards’ increasingly menacing activity, the Trump administration in 2019 finally designated it as a state terrorist organization. However, in order to rid the Middle East and the world once and for all of the organization’s carnage and destruction, it needs to be completely dismantled, as was the Nazi military machine.

Dr. Reza Parchizadeh is a political theorist, historian, and senior analyst. He can be reached at https://twitter.com/rezaparchizadeh and https://iup.academia.edu/RezaParchizadeh.