The desire to boycott Israel has existed since the country was created in 1948. 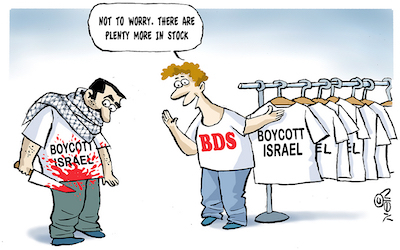 In a confusing statement posted online this week, the Ben & Jerry's ice cream company said: "We have a longstanding partnership with our licensee, who manufactures Ben & Jerry's ice cream in Israel and distributes it in the region. We have been working to change this, and so we have informed our licensee that we will not renew the license agreement when it expires at the end of next year."

The company said, however, it "will stay in Israel through a different arrangement."

It remains to be seen if this is corporate virtue-signaling or if anything actually changes. Will people have to smuggle ice cream across the Green Line? What will happen to the treasured flavors for Palestinians who like the pints?

With none of this clear, and people being asked to continue to support the local company that makes the product, the only real effect so far has been hand-wringing on social media. Is this decision a win for the movement that seeks to boycott Israel, and what has that movement accomplished over the past decades?

The desire to boycott Israel has existed since the country was created in 1948. It has manifested itself in numerous ways, especially the refusal of a number of countries to recognize the Jewish state. They have done various things over the years, such as try to criminalize trade with Israel or even using oil production as a weapon to threaten the US after the Yom Kippur War in 1973, complaining about Western support for Israel.

This appeared effective in some ways during the Cold War. The so-called "nonaligned" movement was often hostile to Israel, which even lost friends in places in Africa and lost Iran as a friend after the Iranian Revolution in 1979.

However, for the most part, serious attempts to boycott and even blockade Israel and to influence Western chanceries failed after the end of the Cold War.

In 2016, Israel and Russia marked 25 years since the restoration of relations, and in 2017, Israel and India celebrated 25 years of relations. New normalization deals with the Gulf, called the Abraham Accords, and new relations with Morocco and Sudan illustrate that Israel is far from isolated. ...

What is left of the "boycott" movement appears to be mostly some privileged activists in the West who ascribe to things such as "Boycott, Divestment and Sanctions" or what is called BDS. Over the years, there have been many high-profile campaigns by these groups to advance efforts toward their boycott goal. But it's unclear if any of these efforts have succeeded. ...

There may be an elephant in the room as well.

Large human-rights groups have recently been pushing claims that all of the areas Israel controls are "apartheid," not just Israel's role in the West Bank. This is an attempt, apparently, to dovetail with the extremist Palestinian rhetoric of "from the river to the sea." This also dovetails with activists in the West who promote the "one-state solution," which consists of a handful of people.

"The more that [the term "apartheid"] becomes part of the mainstream, the more difficult it will be for companies and for investment review agencies to physically separate what goes on in Israel from what goes on with its activities in the Occupied Territory," Michael Lynk, the UN's special rapporteur for the human-rights situation in the Palestinian Territories, told Reuters recently.

Given that the goal of many of the extremist activists is not in line with international law and logic, the actual results of boycotts appear to have been undermined. This is because the supporters of these boycotts don't really want to isolate just Israeli settlements; their goal has tended to be the erasure of Israel, alongside the "one-state" activists and "river-to-the-sea" preachers.

By grasping at so much, and thinking they will achieve some kind of "South Africa model" regarding Israel, they appear to lose the overall struggle.

So what does it add up to? Israel's GDP continues to grow, and the country, despite its small population, is doing well compared with its peers. Israeli hi-tech companies are also receiving a mass influx of investment, raising some $10 billion in just the first five months of 2021. ...

If one wants to ask whether the "boycott" has accomplished anything, just look to those realities.

Seth J. Frantzman is a Ginsburg-Milstein Writing Fellow at the Middle East Forum and senior Middle East correspondent at The Jerusalem Post.