[F]orget all that talk about a “two-state solution,” let deterrence do its work In keeping the peace between Israel and its enemies, and turn your attention elsewhere, please, Joe, to whatever needs to be done to deter China, Russia, North Korea. 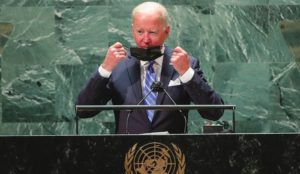 Joe Biden showed up at the U.N. General Assembly on September 21 and delivered his prescription for ensuring Israel’s future. Robert Spencer wrote about his speech here, and a report on Biden’s “commitment to Israel’s security” is here: “Biden Says Two-State Solution Is ‘The Only Way’ to End Israeli-Palestinian Conflict,” i24 News, September 21, 2021:

President Joe Biden said Tuesday that a sovereign and democratic Palestinian state is the “best way” to ensure Israel’s future.

How likely is it that there will ever be a “democratic” Palestinian state? There are right now 22 Arab states. Not one of them is a true democracy, nor is ever likely to be one. As for the Palestinian Arabs, in particular, the savage repression by the Hamas rulers in Gaza, where dissidents routinely are beaten, imprisoned, or “disappeared,” is matched in the West Bank by the repressive rule of the P.A., which treats its own dissidents in similar fashion. The P.A. has held exactly one presidential election, back in 2005. The ruler of the P.A., Mahmoud Abbas, is wildly unpopular; he is known to be corrupt, with a family fortune of some $400 million. Still he clings to power. He is now entering the seventeenth year of his four-year term. If you dissent from his rule, you are likely to be beaten, imprisoned, or – as happened recently to a well-known dissident, Nizar Banat — even killed.

“We must seek a future of greater peace and security for all people of the Middle East,” Biden said in a speech to the UN General Assembly.

Why? Why must “we seek a future of greater peace and security for all people of the Middle East”? Why the Middle East and not, say, for the people in Latin America, or Africa? After the costly fiascos — many trillions of dollars wasted — in Iraq and Afghanistan, where naive geostrategists had hoped to transplant democracy, are we now to take upon ourselves, or ask the world to take on with us, the hopeless task of turning the Middle East into Western Europe? What about a different set of goals that can, in fact, be achieved and that make sense? The first of these goals ought to be to prevent the unthinkable: “We must make sure that Iran never acquires nuclear weapons, even if that requires military action by us or our allies.” Second, we should reassure our closest ally: “We must make sure that Israel has the weapons to defend itself and the knowledge of our full support.” Third, to tell the Palestinian Arabs that our patience with them is running out: “We will from now on extend aid only to those who convincingly demonstrate that they neither support nor condone terrorism or antisemitism.” That means no more of those antisemitic schoolbooks that the P.A. keeps promising to replace. And it means an end to the “Pay-for-Slay” program that Mahmoud Abbas has sworn never to give up.

“The commitment of the United States to Israel’s security is without question and our support for an independent Jewish state is unequivocal,” he said.

Does Biden not realize that the “commitment of the United States to Israel’s security” seems not quite “without question” nor “our support for an independent Jewish state” seem “unequivocal,” given that the Bidenites are determined to provide hundreds of millions of dollars to the P.A., in direct violation of the Taylor Force Act? That is the law that was meant to prevent American aid from being given to the P.A. as long as it continued to supply generous stipends to imprisoned terrorists or to the families of terrorists who have been killed. The P.A.’s “Pay-For-Slay” program has not stopped; the Taylor Force Act remains on the books; yet Biden has already been lavishing money on the P.A. He’s violating the law, and no one is stopping him. And he is calling into question his own “commitment” to Israel’s security, by allowing a program that both rewards past, and incentivizes future, terrorism against the Jewish state.

Nor is that all that Biden has done to undermine Israel. He now wants to move back to east Jerusalem the “consulate to the Palestinians” that had been folded into the Embassy when it was moved to Jerusalem by President Trump. This reopening of that consulate will help to legitimize the Palestinian claim to Jerusalem as the site of its future capital. And just as bad, Biden wants to allow the PLO, a recognized terror group, to reopen an office in Washington; it was one of the first things Biden called for, on January 28, when he had been in office for scarcely more than a week.

How do any of these moves — the renewal of aid without an end to “Pay-For-Slay,” the reopening of the “consulate to the Palestinians, the PLO office to be re-opened in Washington — demonstrate a “commitment of the United States to Israel’s security”?

“But I continue to believe that a two-state solution is the best way to ensure Israel’s future as a Jewish democratic state, living in peace alongside a viable, sovereign and democratic Palestinian state,” he said.

“We’re a long way from that goal at this moment but we should never allow ourselves to give up on the possibility of progress.”

What does that mean – “a two-state solution”? They come in all configurations. President Trump had a “two-state solution,” but Israel’s territory would have been far more ample in his version than what Mahmoud Abbas, and likely Joe Biden, have in mind. Biden has never spelled out what his “two-state solution” would look like. Would Israel be forced back within something like the 1949 armistice lines, which Abba Eban famously called “the lines of Auschwitz,” giving Israel only a nine-mile-wide waist from Qalqilya to the sea? Would Biden support Israel if the Jewish state insisted that in order to have “secure [i.e.defensible] and recognized borders,” as allowed by U.N. Resolution 242, it had to hold onto the Jordan Valley, as well as the major settlement blocs in the West Bank, and the Golan (annexed in 1981)?

Here’s another way to look at the Arab war on Israel: there is no solution. Not one-state, not two-state, not an n-state solution. Biden needs to recognize that there is not a “problem” susceptible of a “solution,” but rather, a “situation” that must be “managed.” Just as the U.S. held the Soviet Union in check, through deterrence, during the Cold War, Israel can keep the Palestinians and other enemies in check, if the IDF is supplied with the necessary weaponry and retains control of territory it deems essential. That means no return to a nine-mile-wide waist for Israel. No giving up of the Jordan Valley, either, control of which is indispensable to preventing an invasion from the east. No return of the Golan to Syria, which if it ever got that territory back would use it just as it did before – as a site from which to rain fire down on Israeli farmers in the valley far below. No giving up of the major settlement blocs, where citizen-soldiers — Israel, remember, has universal military service — by their mere presence help to secure the West Bank.

Israel will then be able, through deterrence, to “live in peace” with or without the consent of the Palestinian Arabs, who have never given the slightest sign of being able to create a “viable, sovereign and democratic Palestinian state.” Instead, they now have two mini-states, both despotisms, whose corrupt leaders – in the P.A. and Hamas — are at each others’ throats, while they keep their own people in thrall, violently suppressing all dissent, while graspingly taking their cut from the foreign aid that has kept them going for decades. Neither Gaza nor the P.A.-ruled parts of the West Bank are “viable” in any sense; without constant large infusions of foreign aid — which may not always be forthcoming in the future — they remain economic basket cases. It’s impossible to imagine the P.A. and Hamas ever making peace with each other, or their leaders ever surrendering power through elections. Give Israel the weapons it needs to defend itself, including bunker busters for those nuclear facilities deep inside the mountain at Fordow, forget all that talk about a “two-state solution,” let deterrence do its work In keeping the peace between Israel and its enemies, and turn your attention elsewhere, please, Joe, to whatever needs to be done to deter China, Russia, North Korea.