By placing the keys to peace in the hands of anti-Semites sworn to the destruction of the Jewish state, Merkel and colleagues effectively say the Arab war against Israel is justified and should be maintained indefinitely. In other words, they said Israel has no right to exist. 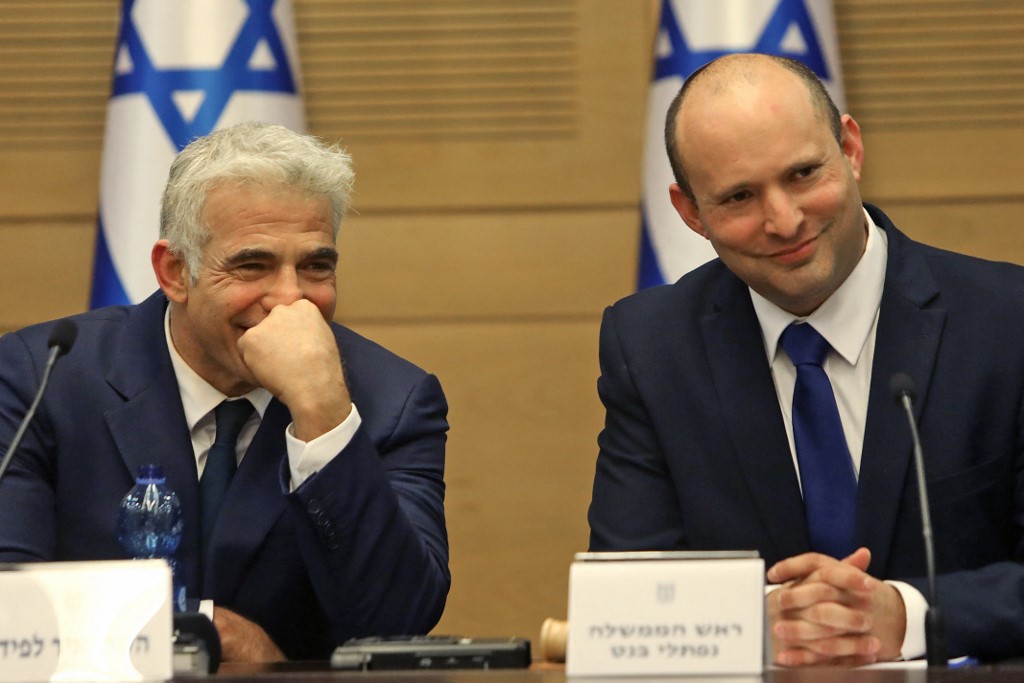 This week’s diplomatic calendar highlighted the difference between this year’s foreign policies and last year’s.

Sunday, Prime Minister Naftali Bennett and Foreign Minister Yair Lapid hosted outgoing German Chancellor Angela Merkel in Jerusalem for a farewell visit. Although Israel’s media and foreign policy elites have long presented Merkel as a friend of Israel, for much of her 16-year tenure in office, she has advanced anti-Israel and even anti-Jewish policies. Under her leadership, Germany given more money to anti-Israel political groups, including groups involved in boycotting Israel than any other EU-member government.

With Merkel’s support and diplomatic protection, an illegal settlement was established in Judea. Khan al-Ahmar, an illegal Beduin encampment was built on state land at a strategic chokepoint which directly threatens both Israel’s Highway 1 and the community of Kfar Adumim. But even Israel’s all-powerful Supreme Court justices, who ordered Khan el-Ahmar’s dismantlement more than two years ago are no match for Merkel.

Then too, with Merkel at the helm, Germany has voted lockstep with the Palestinians on virtually every anti-Israel measure at the United Nations.

Then there is Iran. Since she entered office in 2005, Merkel has assiduously maintained Germany’s position as Iran’s largest trading partner in Europe. She has opposed sanctions and backed her colleagues as they made light of Iran’s human rights violations, its nuclear proliferation and sponsorship of terrorism. She has been an indomitable supporter of the 2015 nuclear deal with Iran, despite the fact that it provides Iran with an open road to a nuclear arsenal. She was unmoved by voluminous evidence of Iran’s bad faith negotiations and systematic, material breaches of the limitations the 2015 deal placed on its nuclear activities.

Merkel led the EU’s opposition to then President Donald Trump’s decision to withdraw the U.S. from the nuclear deal in 2018. She spent years undermining the U.S.’s strategy of “maximum pressure” on Iran. Arguably in breach of the law of nations, Merkel blocked the U.S. effort to compel the implementation of the so-called “snapback sanctions.” Under the UN Security Council Resolution 2231 that anchors the 2015 deal, the sanctions the Security Council placed on Iran in response to its breaches of the Nuclear Non-Proliferation Treaty were suspended. Resolution 2231 stipulated that a party to the resolution could order the automatic reinstatement of the sanctions (“snapback”) if it found that Iran was violating the deal. Merkel led the EU-3 in arguing absurdly that the U.S. withdrawal from the deal meant it lacked the authority to reinstate the sanctions. Even if this claim were true – which it was not – it begged the question, why didn’t Germany reimpose the sanctions? The answer was obvious: Merkel didn’t mind Iran’s violations.

Despite Merkel’s commitment to policies that caused it strategic harm, Israel went out of its way to pretend that she was a “friend.” The rationale was clear. A crisis in German-Israeli relations would harm Israel far more than it would harm Germany. Germany is Israel’s largest trading partner in Europe and the most powerful member of the EU. An angered Berlin could devastate Israel’s economy and precipitate a brutal political and economic offensive from Brussels. So Israeli leaders cooed over our “friend Angela” each time she said something mournful about the Holocaust.

But whereas putting a happy face on Merkel’s hostility made sense while she was in power, doing so now, when she is a lame duck is hard to justify. Bennett advanced no discernable Israeli interest when he referred to Merkel’s Germany as “Europe’s moral compass.” Indeed, he harmed the country. By praising a woman who undermined and subverted Israel at every turn, Bennett’s signaled to her successors that they have only to gain from maltreating Israel.

Merkel made a quick departure on Sunday night. And that made sense. She wouldn’t have wanted to be in Jerusalem on Monday, because on Monday Israel marked the first anniversary of the Abraham Accords. Merkel was one of the historic peace accords between Israel and the Arab states of Bahrain, the UAE, Morocco and Sudan’s greatest opponents. She and her EU colleagues could barely constrain their rage when Trump announced them. Berlin and Brussels both boycotted the Abraham Accords signing ceremony at the White House.

In his remarks at the Knesset event marking the anniversary of the Abraham Accords, Opposition Leader and former Prime Minister Benjamin Netanyahu said, “So long as they said you can’t make peace with the Arab world without peace with the Palestinians, we couldn’t make peace. We broke the Palestinian veto and brought four historic peace agreements, the Abraham Accords.”

Who were “they” who insisted on giving the Palestinians veto power over Arab-Israeli peace? Among others, “they” were Merkel and her colleagues in the EU and the Democrats who also boycotted the White House signing ceremony. Their desire to maintain “the Palestinian veto” over Arab-Israeli peace was never a simple matter of priorities. It was a fundamental conviction grounded in anti-Semitism.

By placing the keys to peace in the hands of anti-Semites sworn to the destruction of the Jewish state, Merkel and colleagues effectively say the Arab war against Israel is justified and should be maintained indefinitely. In other words, they said Israel has no right to exist.

This brings us to Lapid and Bennett who slobbered over Merkel on Sunday. The Lapid-Bennett government has an uneasy relationship with the Abraham Accords for two reasons. First, they don’t like the deals because their nemesis Netanyahu made them. And second, most members of the government, which is controlled by leftists and the Muslim Brotherhood-aligned Islamist party want to give the Palestinians their veto back.

But for all their opposition to the Abraham Accords, Lapid, Bennett and their colleagues are stuck. As Israelis, they can’t oppose real peace with four Arab states.

Since they came to power in June, Lapid, Bennett and their colleagues have dealt with their Abraham Accords quandary by denying the strategic significance of the peace with the Arab states of Africa and the Persian Gulf while effectively restoring Israel’s pre-Abraham Accords appeasement-based foreign policy.

In Bennett’s case, this has meant reaching out to Jordan. Israel’s relations with Jordan have been wretched for years. The crisis in relations is a function King Abdullah’s animosity and Netanyahu’s refusal to kowtow to him. In stark contrast to his father, the late King Hussein, Abdullah has embraced the PLO.

Abdullah supports Palestinian terrorism and shelters Palestinian terrorists. He is PLO chief Mahmoud Abbas’s full partner in waging political war against Israel on the international stage. And like Abbas, Abdullah has filled Jordan’s media, which he controls, with anti-Semitic incitement. Abdullah did everything he could to scuttle and subvert the Abraham Accords. He even denied Netanyahu’s request to fly through Amman for an official visit to the UAE earlier this year.

Then there is Iran. In recent years, Abdullah has been coyly cozying up to Iran while enjoying U.S. military protection. This week, Abdullah’s regime media played up his foreign minister’s phone call with his Iranian counterpart.

Bennett’s outreach to Abdullah is entirely devoid of pressure on the Hashemite monarch to reverse his anti-Israel course. Bennett hasn’t urged Israel’s ostensible peace partner to follow in the footsteps of the Abraham Accords member nations and normalize Jordan’s relations with Israel. He hasn’t demanded that Abdullah honor the U.S. extradition request for Sbarro pizzeria bomber Alham Tamimi. Tamimi, who has made a career out of gloating over her murder of 15 people, including eight children at the suicide bombing she orchestrated twenty years ago, is living the good life in Amman under King Abdullah’s protection. Bennett hasn’t demanded that Abdullah stop wooing Iran.

Ignoring all of Abdullah’s hostile actions, Bennett has blamed the crisis in Jordan-Israel relations on Netanyahu. By blaming Netanyahu, Bennett has made “fixing” Israel’s ties with Jordan a simple matter of bowing to every Jordanian demand. Tuesday, Bennett’s government praised a “historic” breakthrough in ties: Israel agreed to double the quantity of water it gives Jordan at cost from the Sea of Galilee.

This brings us to Lapid and his weird visit to Washington.

While Iran was ostensibly the focus of Lapid’s visit, the Biden administration made clear that it has no intention of reconsidering its commitment to maintaining its nuclear appeasement policy towards Tehran. Then there are the Palestinians. Ahead of Lapid’s arrival, the administration used the anniversary of the Abraham Accords, (which it refuses to call by their name), to underline that they are with Merkel in their hatred of the peace deals and their determination to reinstate the Palestinian veto over Arab-Israeli peace.

“The Biden administration has started out with a clear commitment to the two-state solution…. We continue to welcome the economic cooperation between Israel and all countries in the region. We hope that normalization can be leverage to advance progress on the Israel-Palestinian tracks,” and anonymous State Department spokesman said.

Lapid papered over Israel’s concern over the administration’s pro-Iranian stance and its diminution of the historic peace. And this makes sense. Just as Bennett ignores Abdullah’s hostility and blames Netanyahu for bad relations with Jordan, so Lapid scapegoats Netanyahu as the cause of Democrat antagonism towards Israel.

In the interest of castigating Netanyahu, Lapid has long ignored both the radicalization of the Democrat Party and the rapid spread of anti-Semitism through the American left over the past decade.

Tuesday Lapid met with Vice President Kamala Harris on Tuesday. Lapid heaped praise on Harris just two weeks after she praised a student who accused Israel of committing genocide. Harris, he said, is “one of Israel’s best friends in Washington. A leader who always stands with us in all the important struggles and who we can always count on in difficult moments.”

In Lapid’s follow-on he didn’t simply ignore what Harris just did. He indirectly justified her behavior. In his write-up of the meeting on his Twitter feed, Lapid said that in addition to discussing Iran’s nuclear program, he and Harris spoke about how to “strengthen the bipartisan connection with the next generation of Americans.”

Lapid didn’t express concern over galloping anti-Semitism on campuses. He heaped praise on younger Americans. “They aren’t just busy with wars and confrontations but also with the climate crisis, the global immigration crisis and with questions of identity,” he cooed.